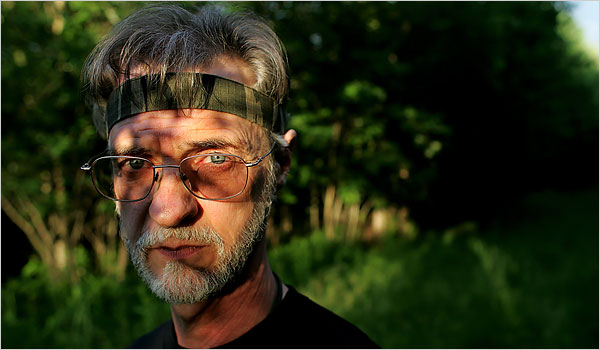 Who knew the NY Times had a "Wildlife Activities and Interests Section"? Must be an Internet thing.

Today being the first of August, the month in which we are all most likely to get lost in a thick green woods full of impenetrable bramble, froggy swamps, and predatory beasts, the paper of record provides fearful Manhattanites and their cross-country peers a variety of handy tricks for surviving lost in wild nature:

UNLESS John D. McCann, the managing director of Survival Resources, based in Hyde Park, N.Y., is wearing a suit for some sort of business meeting, he always carries in his pants pocket an Altoids tin. There are no mints inside it. Instead, he painstakingly packs the tin — which he explains can double as a mini-frying pan if you’re ever marooned in the wilderness — with a remarkable assortment of worst-case scenario supplies.

The contents include — but are not limited to — matches that Mr. McCann hand-dips in Thompson’s WaterSeal to waterproof them, a tiny magnesium fire starter, a small lens for igniting fires should the matches and magnesium fire starter fail, an L.E.D. flashlight, a button-size compass, a thin square of mirror to signal potential rescuers, 20 water purification tablets, a meticulously folded freezer bag to store potable water, a packet of antibiotic ointment, butterfly bandages, a sewing bobbin with 20 feet of fishing line, a dozen hooks, six weights, laminated instructions on tying knots and snare wire for capturing small animals. All in one Altoids tin.

Very cool. Perhaps this is what results from a society that combines persistent inducement of fear by the government with the lingering secret yearning for the liberating release of the "Cozy Catastrophe," of the trappings of civilization being torn down so you can roam the streets with the maximum liberty of, say, Charlton Heston in the Omega Man (who still kicks Will Smith in I Am Legend's butt), or physician Tom More in Walker Percy's Love in the Ruins, evading sniper fire by the interstate cloverleaf, busting gin blossoms while his three female companions wait in abandoned Howard Johnson's nearby.

If you go to the Survival Resources website, you can find samples of their pre-packed survival kits:

Turns out this John McCann actually has a whole book on the subject: How to Build the Perfect Survival Kit. The principle guiding this specialized craft? "An emergency can arise at anytime."

"Armed with the kit-building techniques found in this book, You Will Be Prepared To Survive!"

Wow. What would you put in yours?

Is it possible that slipstream matriarch Kelly Link has read Mr. McKann's book, been personally tutored by him, or even worked as one of the elven kit-making assistants at his redneck Rivendell? In her effusive generosity to her friends and colleagues, Kelly has long been known for her love of giving extremely thoughtful gifts (particularly books), often to people she has just become acquainted with. As a technique to ensure the survival of the giver's memory in a position of prominence and fondness in the recipient's mind, it's hard to beat. This summer, under the tutelage of my betters at the Sycamore Hill Writers Workshop, I learned of Kelly's production of a custom line of post-McCannian survival kits, establishing herself permanently in the pantheon as Athena to an elect handful of literary Perseii. Among the recipients, the incredibly talented and architecturally inspired Richard Butner, who most likely can be found traveling undercover as a 13th century rogue at a Renaissance Faire near you. Richard was kind enough to share with me recently the breakdown of his secret kit, and I can attest that it is a marvel of thoughtfulness, Yankee ingenuity, fabulist imagination, and Japanese-style packing techniques. Without revealing trade secrets of the creator or the user, I will note that it contains, in order of importance:

Nice. Richard's highly advanced twee-ometer is not included, having been surgically implanted within his body.

For a full literary exploration of this theme and a great summer novella, go read (or reread) Geoffrey Household's Rogue Male (now reprinted by increasingly awesome New York Review Books with a brilliant introduction by Victoria Nelson), a marvelous proto-Rambo tale in which an English gentleman, hunted by Nazi agents after nearly assassinating Hitler as a sporting play, literally goes to ground in an underground den of his own making in a tiny pocket of interstitial nature on the side of a country road.

Now go make your own kit, and head off the trail.
Posted by Christopher Brown at 6:23 AM

A frying pan for your rat steaks...

Bug Out Bag, Must Have Survival Gear and other Equipment
http://docs.google.com/View?id=d2frzjs_96ckpm26d7