Over at my Tumblr, my translation of a fascinating news story from La Jornada of Mexico about the role of American drone and electronic surveillance support in the capture of Los Zetas leader Z-40.

Posted by Christopher Brown at 5:06 PM No comments: 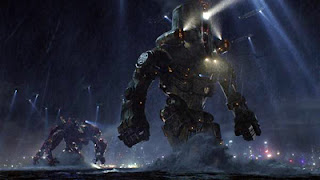 I'm a fan of giant monster movies from way back. A number of writer-types I hang out with during science fiction conventions fell in love with the form having first seen King Kong, but for me, Godzilla was my gateway drug of choice. The Saturday afternoons of my childhood were filled with hours upon hours of watching the "Creature Feature" on one of the Houston television stations, along with Friday evening's themed "Movie of the week" which often featured giant monsters going at it. This is how I first got exposed to King Kong, Godzilla, Gamera, Ray Harryhausen's work, THEM!, The Land that Time Forgot and the like. I also took in a steady diet of Ultraman, Battle of the Planets and a variety of anime, so when a movie such as Pacific Rim comes along, I am pretty much their target audience. I am happy to report that Pacific Rim is a whole heck of a lot of fun. Guillermo del Toro is a magnificent director, and while this film isn't nearly as intimate as most of his other work, it still boasts a depth and character to it that is wholly lacking in other films of this sort. Raleigh Becket and Mako Mori (played by Charlie Hunnam and Rinko Kikuchi) are both characters reeling from personal loss who need to overcome that trauma to help save the world. Mori in particular is an ass-kicking powerhouse occasionally crippled by her inner demons, and easily the most charismatic character in the movie. The commander of the Jaegers, Stacker Pentecost (played by Idris Elba) chews pretty much every piece of scenery around him, but remains fun to watch. Only Ron Perlman's black market Kaiju parts-dealer Hannibal Chau is too over-the-top for my taste, but given that Pacific Rim is very much a live-action anime, his character type is immediately recognizable and is appropriate for the role. Pacific Rim manages to be a smartly-written film whilst simultaneously embracing pretty much all the conventions of giant robots vs. giant monster films. That sounds weird, I know. There's rubber science galore in this film, but it's generally consistent and well-defined, enabling the willing suspension of disbelief. 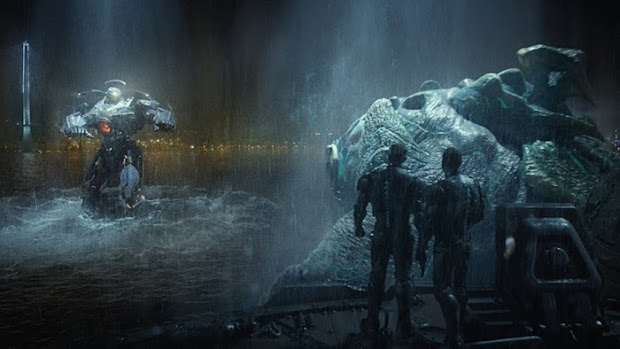 I took my entire family to see this, including The Wife, Monkey Girl (14), Fairy Girl (12) and Bug (7). Monkey Girl loved it, picking up on all the anime references (and in truth, this movie is very much like a live-action anime with all the neon colors and over-the-top characters). The Wife mocked the cliches, although she seemed to enjoy it for the spectacle. Fairy Girl thought it was "Okay." Bug, the youngest, enjoyed the giant monster battles quite a bit, although his attention flagged during the human-centric buildup to the final mission. Historically, for me at any rate, the characters are always the weakest link during giant monster movies, filling time between the big monster smack-downs by sleepwalking through meaningless sub-plots. Pacific Rim does a much better job than most of tying the main characters' actions together with the big battles to make everything that happens relevant and engaging. De Toro doesn't radically alter the formula or reinvent or deconstruct the form. He takes the existing conventions and simply does them very well. The story (if you don't already know) is set in the near future. Giant Kaiju monsters emerge from a dimensional rift on the Pacific Ocean seafloor and begin destroying coastal cities. It takes days of constant battle for conventional weapons to kill these monsters, so the Jaeger program--giant combat robots (otherwise known as mechs)--is launched to better combat the Kaiju threat. For five years, the Jaegers successfully intercept and destroy Kaiju, but abruptly the monsters start coming more frequently and get larger and more powerful. Jaegers begin to lose. Eventually, Kaiju are destroying Jaegers faster than replacements can be built. After seven years of battling the more powerful Kaiju, only four Jaegers out of a total of 51 remain, and the program is scuttled in favor of building a giant wall around the Pacific to keep the Kaiju from threatening population centers. Guess how well that works out? Quite a few reviews have lavished praise on the special effects of the film, and while that's often a way of damning with faint praise--the implications being that the rest of the film doesn't hold up--in this case the attention to detail adds a great deal to the film. The Jaegers show significantly diverse personalities for giant robots, reflections, no doubt, of their human pilots within. My biggest disappointment came from the fact that (Spoiler Alert!) the Chinese Jaeger, "Crimson Typhoon," and the Russian Jaeger, "Cherno Alpha," both met with pretty abrupt defeats despite coming off as the most badass of the surviving Jaegers. Cherno Alpha is a Mark I Jaeger, the oldest and most primitive, and has a magnificently industrial, blunt-force-trauma design to it. Crimson Typhoon, by contrast, is a spectacular three-armed Mark 4 Jaeger piloted by triplets. It has rotating blades for hands, and looks like an insane martial arts nightmare. The two surviving Jaegers--following the battle for Hong Kong--are "Gipsy Danger," a recovered and rebuilt Mark III model formerly based in Alaska (and the Jaeger of our viewpoint characters), and "Striker Eureka," an Australian Jaeger and the only Mark V model built prior to the discontinuation of the Jaeger program. Both of these Jaegers are fun, but their designs are too sleek, too clean (despite significant wear and tear). They're both cut from the same cloth, aesthetically-speaking, whereas the Russian and Chinese Jaegers were much more distinct even when standing still. Yes, I wanted more on the other Jaegers and their crews--who were introduced only long enough to be killed off. But that's a flaw this film shares with many others. 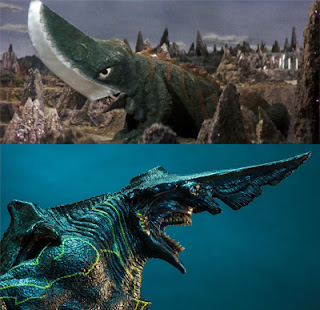 As for the Kaiju... well, they were okay. I'm not sure any rise to iconic status, although all are more interesting than the pasty, gaunt monster from Cloverfield. Despite insistence that the designers took pains to avoid paying homage to any historical Kaiju from old Japanese monster movies, one in particular--Knifehead, pictured bottom left--is for all the world a hard-core update of Guiron, a knife-headed monster that battled the flying turtle Gamera in 1969's Attack of the Monsters. On the other hand, Otachi and Leatherback, two Kaiju that attack Hong Kong, are physically similar enough in broad strokes that I had a great deal of trouble telling them apart during the battle. Part of it comes from the color schemes used--Leatherback has an EMP generator that flashes bright, neon blue, while Otachi spits a like-colored acid from a glowing sack in her throat. Both are big and bulky, and while one has hidden wings a long tail, it's hard to tell during the mayhen of battle that these creatures don't share all of these attributes. That's part of the problem with the battle scenes taking place at night and (often) in the ocean: For practical reasons, it's easier to animate a convincing giant monster in these conditions, as the darkness and water obscures much of it's body. The downside is that much of the monster is obscured, making it much more difficult to get a clear visual identification. The Kaiju shown during the day are mostly seen through stock footage or news broadcasts, and not engaged in battle. Likewise, during the final battle of the film, the two Category 4 Kaiju--Scunner and Raiju--both swim around so quickly in poorly-lit conditions it is difficult to tell that they are distinct types, and not duplicates of each other. The third Kaiju in the battle, Category 5 Slattern, is more easily distinguished by its immense size and three tails. The finale of the film is probably the most disappointing aspect of the whole shebang. After the excitement of the battle for Hong Kong (which is a whole lot of fun) the battle at the Rift is a lot more by-the-numbers. Remember in The Avengers, how Iron Man closed the dimensional portal and destroyed the invading army bent on conquering the world? Well guess what? That's exactly the same as what happens here, a parallel made all the more striking by the fact that the Jaeger Gipsy Danger is essentially the Iron Man armor scaled up really big. Apart from that, the general thrust is one we've seen time and again dating back to Star Wars and probably before. Despite the film's shortcomings, Pacific Rim is a whole lot of fun and infinitely better than the bombastic Transformers movies. It doesn't transcend or transform the genre, but accomplishes all the goals it sets for itself. I left the movie theater happy and buoyant, unlike Man of Steel, which left me overwhelmed and numb (and later, angry). There's not a lot else to be said for it. If you like action spectacles, if you watch the animes Mobile Suite Gundam or Neon Genesis Evangelion, if the names Godzilla or Gamera or King Kong make you smile, then this is a movie you're probably going to like. Is it Star Wars for a new generation, as some have breathlessly hyped? Hardly. But it's a good movie, one that's likely to take in more than $400 million worldwide even if it only grosses $100 million in the U.S. and is thus declared a "flop." This is a film that's going to sell lots of DVDs to those who missed it in the theaters, and grow in popularity over the coming years. It's good, solid entertainment that doesn't talk down to the audience, and for those of us who've been consistently disappointed by offerings in this genre (Godzilla 1998, I'm looking at you!) Pacific Rim goes a long way toward righting those wrongs.
Posted by Jayme Lynn Blaschke at 5:04 PM No comments: 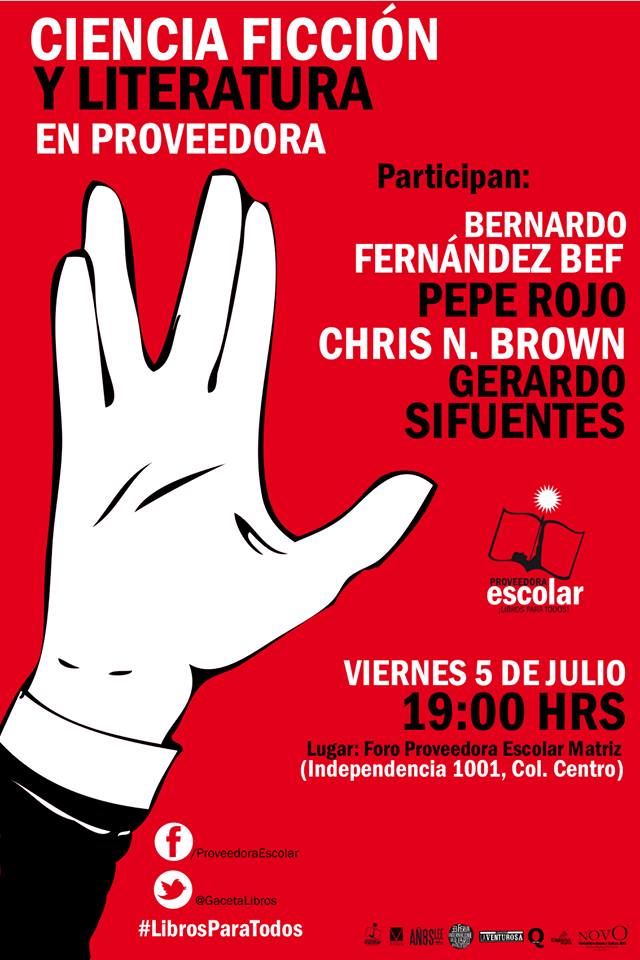 See you this Friday night in Oaxaca, where I have the good fortune to join my friends and colleagues the Mexican writers Bef (Bernardo Fernández), Gerardo Sifuentes and Pepe Rojo for a talk about SF and literature at the Proveedora Escolar bookstore: "Libros para Todos."

The wonderful flyer for the event reminds me to ask: did they check Spock's papers? What about Kal El, Katar Hol, and J'onn J'onzz? Why are our American fantastic fictions so rife with illegal (space) aliens hiding in plain sight? Maybe we all secretly identify with the feeling of being a clandestine outsider at risk of discovery? With the notion that the idea of national origin is an illusory fiction? Or at least a socio-political construct deserving of rigorous interrogation? Are they going to deport Edward Snowden back to his home planet? Maybe he will meet us in Oaxaca?

Pretty good discussion of this issue in the context of Superman comics right here. 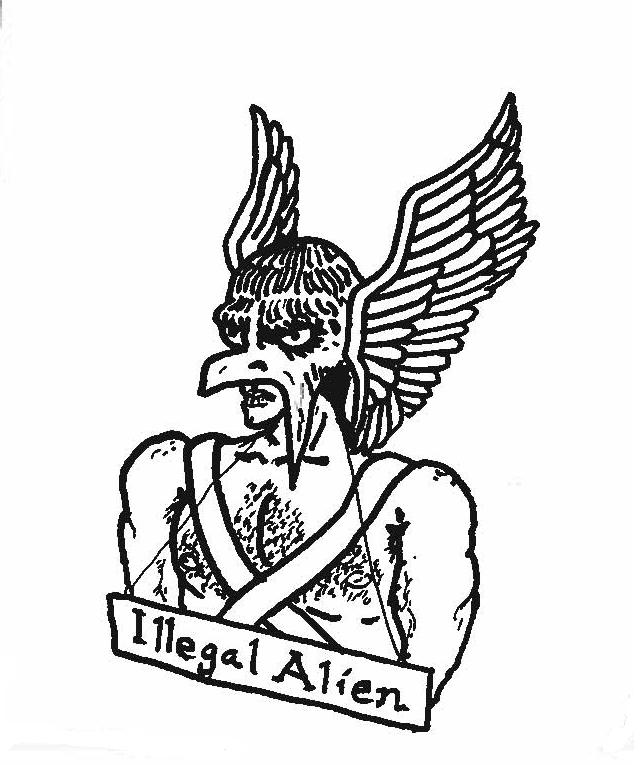 Posted by Christopher Brown at 5:47 AM No comments: