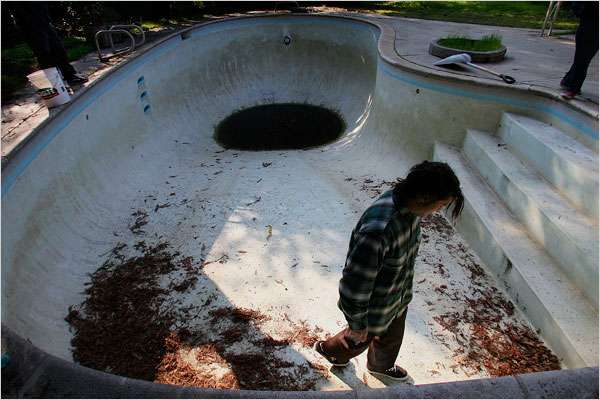 I began to count the [swimming] pools. Ten thousand years in the future, long after the Cote d'Azure had been abandoned, the first explorers would puzzle over these empty pits, with their eroded frescoes of tritons and stylized fish, inexplicably hauled up the mountainsides like aquatic sundials or the altars of a bizarre religion devised by a race of visionary geometers.

Among the most persistent memes in the work of J.G. Ballard is the image of the empty swimming pool. Often grouped with another common cosy catastrophe trope that runs throughout Ballard's science fictions, the abandoned hotel. Ruins of the future, apocalypses of the present, Ozymandian fragments of our entropic imminence, these totems have some serious metaphoric oomph.

So it is always a pleasure to see these potent cultural signs show up in the mainstream press, as in today's New York Times. On the front page, just below the fold, is a feature on the proliferation of empty swimming pools as the result of home foreclosures in the American Southwest. A bummer for the homeowners, but a boon for some — for semiotically illuminated cultural weather-watchers and, more pragmatically, for skateboarders, who scour websites for foreclosure data like surfers watching the morning breaker reports, then head out with their boards, look for the foreclosure notices on the front door, and jump the fence, turning every suburban block into their own pre-apocalyptic pirate utopia. 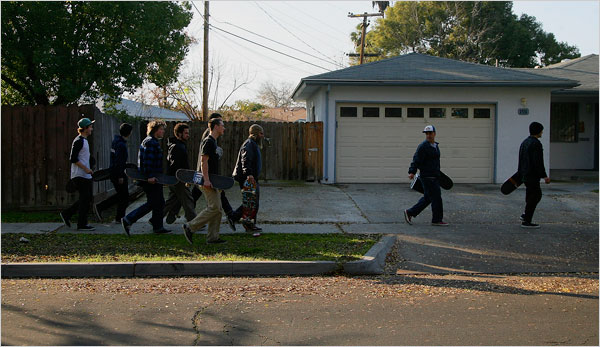 December 29, 2008
Skaters Jump In as Foreclosures Drain the Pool

By Jesse McKinley and Malia Wollan

On a recent morning, a 27-year-old skateboarder who goes by the name Josh Peacock peered into a swimming pool in Fresno, Calif., emptied by his own hands — and the foreclosure crisis — and flashed a smile as wide as a half-pipe.

“We have more pools than we know what to do with,” said Mr. Peacock, who lives in Fresno, the Central Valley city where thousands of homes, many with pools behind them, are in foreclosure. “I can’t even keep track of them all anymore.”

Across the nation, the ultimate symbol of suburban success has become one more reminder of the economic meltdown, with builders going under, pools going to seed and skaters finding a surplus of deserted pools in which to perfect their acrobatic aerials.

In these boom times for skaters, Mr. Peacock travels with a gas-powered pump, five-gallon buckets, shovels and a push broom, risking trespassing charges in the pursuit of emptying forlorn pools and turning them into de facto skate parks.

“We can just hit them back to back,” said Mr. Peacock, who preferred to give his skateboarding name because of the illegality of his activities.

Skaters are coming to places like Fresno from as far as Germany and Australia. Mr. Peacock said his floor and couch were covered by sleeping bags of visiting skateboarders each weekend.

Some skateboarders use realty tracking sites like realquest.com and realtor.com to find foreclosed houses with pools, while others trawl through satellite images from Google Earth. On the Web site skateandannoy.com, where skaters trade tips about how to find and drain abandoned pools, one poster wrote about the current economic malaise. “God bless Greenspan,” the post read, “patron saint of pool skatin’.”

This is not the first time this particular meme has graced the pages of the paper of record. Even before the GWOT's explosion of scenes of American soldiers lounging by empty Baath tubs, there were pieces like the 2001 photo essay on John Cheever's story "The Swimmer," which featured photos of none other than David Hasselhoff pondering the meaning of it all.

Do you suppose David Hasselhoff has ever read The Atrocity Exhibition? Do you think he'd agree to appear in the movie? Or, short of that, maybe a remake of Crash? During the night the swimming-pool had drained itself. The once mysterious world of wavering blue lines, glimpsed through a cascade of bubbles, now lay exposed in the morning light. The tiles were slippery with leaves and dirt, and the chromium ladder at the deep end, which had once vanished into a watery abyss, ended abruptly beside a pair of scummy rubber slippers...

There was something sinister about a drained swimming pool, and he tried to imagine what purpose it would have if it were not filled with water. It reminded him of the concrete bunkers in Tsingtao, and the bloody handprints of the maddened German gunners on the caisson walls. Perhaps murder was about to be committed in all the swimming-pools of Shanghai, and their walls were tiled so that the blood could be washed away?

I think it was in Grahm Greene's The Comedians that the British ex-pat returns to the hotel he owns to find it empty and deteriorating. He also finds a body, a victim of the Duvalier regime, in the empty swimming pool.

You are spot on about metaphorical oomph!