Guy Debord at the Barnes & Noble 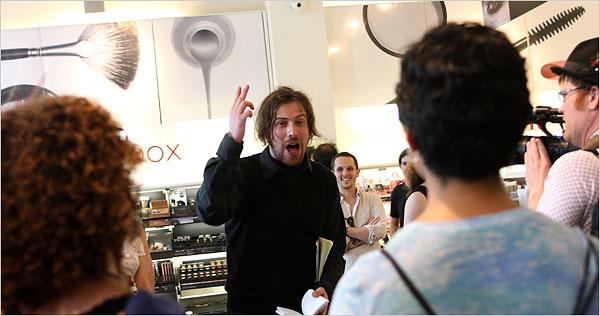 Meanwhile, back on the other side of the planet from Iran, a different sort of insurrection:

They arrived at the Barnes & Noble at Union Square in small groups on Sunday afternoon, proceeding two and three at a time to the fourth floor, where they browsed among shelves holding books by authors like Jacques Derrida and Martin Heidegger.

By 5 o’clock a crowd of more than 100 had gathered. Their purpose: to celebrate the publication of an English translation of a book called “The Coming Insurrection,” which was written two years ago by an anonymous group of French authors who call themselves the Invisible Committee. More recently, the volume has been at the center of an unusual criminal investigation in France that has become something of a cause célèbre among leftists and civil libertarians.

The book, which predicts the imminent collapse of capitalist culture, was inspired by disruptive demonstrations that took place over the last few years in France and Greece. It was influenced stylistically by Guy Debord, a French writer and filmmaker who was a leader of the Situationist International, a group of intellectuals and artists who encouraged the Paris protests of 1968.

In keeping with the anarchistic spirit of the text, the bookstore event was organized without the knowledge or permission of Barnes & Noble. The gathering was intended partly as a show of solidarity with nine young people — including one suspected of writing “The Coming Insurrection” —whom in November the French police accused of forming a dangerous “ultraleftist” group and sabotaging train lines.

As a bookstore employee announced to the milling crowd that there was no reading scheduled for that night, a man jumped onto a stage and began loudly reciting the opening words of the book’s recent introduction: “Everyone agrees. It’s about to explode.”

A security guard tried to halt the unsanctioned reading, but the man continued for about five minutes, until the police arrived. The crowd, mostly people in their 20s and 30s, including some graduate students, then adjourned, clapping and yelling, to East 17th Street. There they formed a rebellious spectacle, crowding into shops and loudly shouting bits of political theory, to the amusement of some onlookers and store employees and the irritation of others.
Posted by Christopher Brown at 8:00 AM