Camille Flammarion, Mad Scientist, and the expedition into the Hollow Earth.

Camille Flammarion (1842-1925) was a French astronomer, science popularizer, and author of science fiction. (Wikipedia entry here). He's not well-known in the U.S., but in Europe he has a certain reputation as a Victorian poor man's Carl Sagan. (Hmm. Costermonger's Carl Sagan? Or would that be too obscure?) Flammarion was also, ahem, a bit of a nut job. The Wiki entry touches on his views on "spiritism," and the at-the-time notorious Flammarion Woodcut (that's the Woodcut there on the right) hint at Flammarion's tendency to let his enthusiasm get the better of him, at the expense of strict truthfulness. (I certainly understand and sympathise with him in this regard. I guess we can just think of this as the 19th century French sf version of truthiness).

A most remarkable bill has been introduced in the American Congress. It appropriates 100,000dol to be expended in boring into the earth's crust, and the duty of spending the money has been relegated to the Engineer Corps of the United States Army. This boring is to be done "with a view of extending and enlarging our knowledge of the features and peculiarities of its formation and structure." The provision for making a report requires "that the Secretary of War shall make a report to the Fiftieth Congress showing the progress of the boring up to the date of the report, together with the views of the board as to the depth to which, with mechanical instruments and appliances at their command, it can be carried ; and that the estimates submitted by the War department for the ensuing year shall include an estimate of the amount necessary to prosecute the work during the fiscal year ending June 30,1889." In choosing land for the purpose preference is required to be given to that of little value, and the title shall be secured to land four miles in every direction from the bore-hole. Curiously akin to this scheme is one propounded almost coincidently by M. Flammarion, the eminent French astronomer, who has been dubbed for his pains "a mad scientist." M. Flammarion's mind is exercised by the spectacle presented in Europe at the present time, where 5,000,000 men stand armed for mutual destruction. In the interests of humanity and science, he wises to utilise the services of these men to some profitable and peaceful task. This is no less than to dig an enormous hole into the globe for the purpose of once for all finding out what is inside. With the armies of Europe for workmen, he would by their means solve the perplexing problems and mysteries which surround the vast regions hid from mortal eye in the body of this sphere. A London paper says :--Of the interior of our earth below the depth of one mile nothing whatever is known, and not even a guess can be made of the 8000 miles which separate us in a direct line from our kinsfolk in Australia and New Zealand. M. Flammarion's weird idea leads to some interesting and amusing reflections. The hole would have to have a diagonal direction, for no hauling gear miles long could be contrived for pulling up and letting down men vertically, as miners do. Cornish miners even work stripped to the skin on account of the heat, and M. Flammarion's soldiers would have to stand a temperature no salamander could endure. Imagine, too, if his hole reached a depth of many miles, the excited work there would be in, perhaps, tunneling through stratas of solid gold, and of finding precious stones as big as boulders. But anything is better than war, and if M. Flammarion, by his wild project, can only divert men from slaughtering each other, the world would be a gainer, and he would be hailed to all time as a benefactor to the human race.
Out here in real life, the idea of all those countries setting aside their enmities and coming together for one big mining project is silly. Never happen. And if it did, we know what would be found: the crust and upper mantle, the lithosphere. If such an expedition had taken place, the only thing of significance that would have taken place is a possible adoption of or at least consideration of the theory of continental drift.

(Not that such an expedition would have stopped loons like Neal Adams, but never mind).

But in fiction or an rpg...now there is where this might-have-been has potential. A Steampunk The Core, for example. (The Core was great! YES IT WAS SHUT UP SHUT UP SHUT UP). Or...well, imagine the scene: thousands of Prussian and French and British soldiers, covertly casting hostile glances at each other as they use their picks and shovels, crack an opening into an enormous cavern. Some of the soldiers fall into the cavern, others scramble away from the hole. Then... 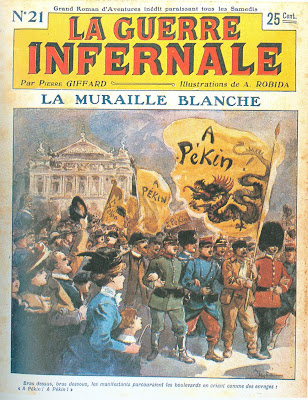 ...well, what's in the cavern? The Mole Man's moloids? Dinosaurs? Some Lovecraftian monster? (Can't recall offhand if HPL had any monster lurking in the depths of the earth). Whatever it is, it retaliates, and suddenly we've got a new version of War of the Worlds, but with the invaders coming from below.

And that's just one of the possible scenarios.

Having just given the preceding a moment's thought, I realize I'm refitting the plot of La Guerre Infernale for a Subterraneans Invade scenario. La Guerre Infernale was a French pulp, created by Pierre Giffard and Albert Robida, which ran for thirty issues in 1908. La Guerre Infernale was about the world war of 1937, which began between Germany and Great Britain and France, dragged in the United States, and then took a right turn when the Japanese, dastardly Yellow Perils that they are, take advantage of the war in Europe to attack. They conquer Europe and attack and conquer most of the United States. This forces the British, Germans, Russians, and Americans to unite into the "White Wall" and attack the Japanese.

I wouldn't want to do a Yellow Peril scenario, but if you swap out the Subterraneans for the Japanese...oh, sod, this is what Harry Harrison did in his Worldwar series, didn't he?