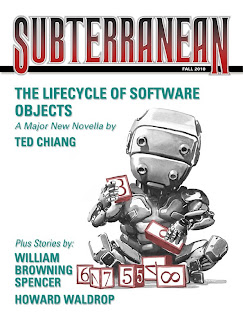 Considering that I edit three different short fiction venues, it might seem a little odd how rarely I read short fiction outside the slushpile. But I spent this afternoon reading the recent novella by Ted Chiang, "The Lifecycle of Software Objects," which is out in the current Subterranean Press. Like most of Ted Chiang's work it is dense, pedantic, and meticulously analytical. It is also about 30k words long, which means about two hours of delicately scrolling the browser page. But a well-spent two hours it was.

At issue with "The Lifecycle of Software Objects" is the banality of artificial intelligence and the tedium of child-rearing. We're used to the following structure for AI stories: mumbo-jumbo plus processing power leads to digital super-intellects, culminating in world-altering drama. This story, for all its insights into the development of intellect, follows a far more personal scope. And somehow feels all the more epic for having done so.

I've been thinking a lot about the value of short fiction, both as an editor and as a writer. It seems that even the good fiction comes in only two flavors: light and heavy. Ted Chiang is the poster-boy for heavy spec fic. It reminds me of what Cait Coker said about John Campbell and the golden-age crew coming into the spotlight after Hiroshima. Their short fiction had been processing the elements of the future for a long time, so they were the only ones not surprised by the man-made sun over Japan. "The Lifecycle of Software Objects" is that sort of story. It's our first glimpse of wonders that will be built in increments through the labor of everyday life.
Posted by Matthew Bey at 6:54 PM