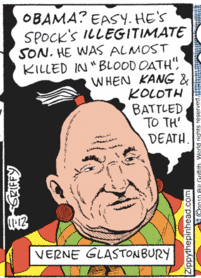 In today's Daily Ink at King Features Syndicate, Bill Griffith and friends of Zippy the Pinhead have some pretty awesome Obama origin myths.

Superhero creation stories were always my favorite comics as a kid, maybe because they filled in backstory in a way that gave the character new meaning. Maybe because they were "Secret Origins." Backstories for those with aspirations of Illumination.

Presidential narratives always have an origin story. JFK and PT-109, Clinton as policy wonk Elvis, Bush as post-temperance frat boy turned postmodern geopolitical Solomon Kane. They even apply to unsuccessful candidates, like the Vietnam stories of John McCain (who alternated between Chuck Norris MIA Christ and Manchurian Candidate) and John Kerry (born on the fourth of july, only he can walk and speak French like a Harvard boy).

But it's rare that the presidential creation myths take on such strangely dark tones as those regarding Obama, clearly revealing the extent to which race enables a different level of alienation into a malevolent Other. Just look at this monster of a Wikipedia entry on the Obama birth certificate controversy. The subtext, that Obama is a sleeper agent of malevolent foreigners who want to destroy our way of life. Or worse, the mythical silver-tongued antichrist of contemporary evangelical Revelations parables. A charismatic (well, okay, used to be) cross between Anna Chapman, Damien from The Omen, Marjoe Gortner and the Manchurian Candidate. A quintessential Middle American fear: He uses language! To persuade us to do things! Mind control!!

(Personally, I was more disturbed, and fascinated, by the revelation that Obama, Cheney, and the Bushes are all related.) 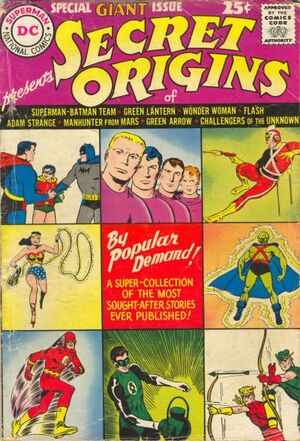 The Dingburgian take from Bill Griffith brilliantly shows how, in a society saturated with so many fictional narratives embedded in the collective cathode ray subconscious, other speculative plays on the Obama secret origins hack both the ridiculousness of the conspiracy theories and the earnest OBEY seriousness of the official Presidential Narrative.

During the election, I wondered whether Obama was the Kwisatz Haderach, only to later find a more compelling take in Salon: Obama is Spock. Which, I guess, is a simpler variation on Griffith's panel above.

All of which is a long-winded way of wondering whether science fiction, comics creators, and other manipulators of the pulp master narrative (the infinitely connected meta-narrative constructed from all the overlapping storylines and never-ending backstories -- Wold Newton on steroids) couldn't do the society a great service by proactively infiltrating the culture with alternative Obama secret origins. This kind of urban legend psyop has a long history in the deniable rumor-mongering that professional campaign managers do: consider, e.g., Lee Atwater's 1996 Iowa caucus rumors that Bob Dole's war wounds were self-inflicted, or the Kerry campaign's 2004 rumors that Howard Dean was a heavily medicated psychotic who got bounced from the practice of medicine. They expose the extent to which political reality already is constructed from pre-existing cultural narratives. So not reinvent them to make them, you know, less boring, more Reptilian?

In otherwords, I want a Jess Nevins-worthy deep pulp Obama backstory, slipped into the culture as anarchist prank. And if it can end up virally replicated on the straight television news, all the better.

Posted by Christopher Brown at 7:22 AM