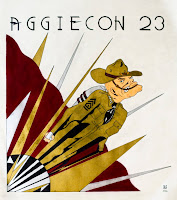 I am a big fan of Dave Stevens' The Rocketeer. I have been for a long time. Take a look at that drawing at right. That's the official logo and t-shirt design I worked up for Aggiecon 23 way back in 1992. That's Texas A&M University's historic Ol' Sarge mascot incorporated into the design, which got a lot of chuckles because of the incongruity. The convention was wary about spending so much to have a multi-colored shirt printed up, but in the end every last shirt sold out, and to this day I'm measurably proud of my brief and otherwise unremarkable career as an artist.

I'm a sucker for the swash-buckling, cliffhanger adventures of the 1930s pulp adventure heroes. I deeply love the movies Raiders of the Lost Ark and Sky Captain and the World of Tomorrow, and enjoyed the short-lived TV series Tales of the Gold Monkey so much that I wrote up a springboard to relaunch it as an ongoing comic book series in the early years of our new century. Lest you think that was a product of wishful thinking and ill-advised fan fiction, I actually got as far as discussing licensing with Universal before the comic publisher got cold feet and backed out (for the record, Universal wasn't even sure if they still owned the rights. Most of the people I spoke with hadn't even heard of the series. Can I pick a hot property, or what?). But The Rocketeer? Wowness!

For those of you unfamiliar with The Rocketeer, let me explain. No, there is no time. Let me sum up: Cliff Secord, a Gee Bee racing pilot in 1938 discovers a stolen rocket pack designed by Doc Freakin' Savage that allows a man to fly through the air with the greatest of ease. With the aid of his airplane mechanic buddy Peavy, he debuts an air show stunt act as the Rocketeer to make enough money to keep his bombshell "art model" girlfriend Betty happy, but soon runs afoul of mobsters and Nazi agents who want to steal the rocket pack. Oh, the Feds and Doc Savage (along with Savage's assistant Monk and Ham) want the rocket pack, too. Cliff, headstrong and passionate, doesn't always make the wisest of choices. Mayhem ensues. And that's just the first story arc. The second, "Cliff's New York Adventure," follows up immediately on the first with Cliff chasing his now-estranged girlfriend to New York City, where he runs into that other great pulp character, the Shadow, who enlists Cliff's help in thwarting a serial killer. That's just aces in my book. Stevens was careful never to name or overtly identify any of these trademarked characters, but the homage is clear enough to anyone with even a passing familiarity with the genre. In 1991 a well-regarded movie version was put out by Disney, which combined elements of both storylines to craft a more cohesive plot. The "Betty" character was changed to "Jenny" and her overt sexuality toned down, while Cliff was somewhat less of a lunkhead in the film, but other than that, the spirit of the film is remarkably faithful to the comic, evidence of Stevens' close involvement with the project (one thing that surprised me is that there is not Neville Sinclair/Errol Flynn analogue in the comics. I'd heard the Errol Flynn connection for years, obviously from people who'd never actually read Stevens' original). 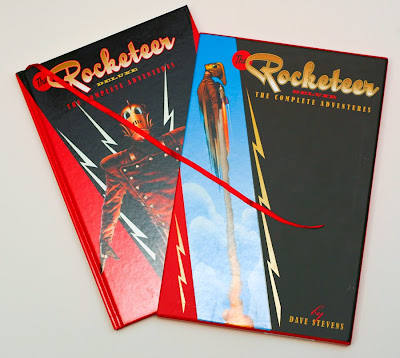 I can't recall when I actually became aware of the existence of Dave Stevens' Rocketeer. I was aware of the character in comic form before the movie adaptation came out in 1991. I almost certainly did not know about it prior to the fall of 1988, when I arrived at college and discovered my first dedicated comic book retailer. Up until then, I'd lived in a very small town and hadn't seen comics with any regularity until the local grocery store started carrying Marvel and DC on the magazine racks in 1987 (I know the date well, because I still have Silver Surfer no. 1 in my long boxes--oh, that Ben Grimm!). Somewhere along the line, I came across The Rocketeer and got all giddy. I can't recall if it was in the back pages of Starslayer or a later incarnation. I just remember the designs and artwork were killer, and I'd never seen anything like it. I also never owned anything like it either. For some reason or other, I never managed to acquire a single issue of The Rocketeer in comic form, with the exception of the Peter David/Russ Heath movie adaptation, which doesn't really count. Area comic shops didn't have it in their back issue bins. When Wizard World came to Texas in November of 2003, I made the long trip up to Dallas (along with Mark Finn) with the intent to buy every single comic book that ever featured Dave Stevens' inspired creation. I went home empty-handed. There were plenty of Cerebus collections, but no Rocketeer anything. I turned to Ebay and discovered the joys of being sniped constantly or watching back issues go for outrageous sums. For a comic I was ostensibly a big fan of, I was having a hell of a time getting my hands on any. At some point, I gave up and forgot about it. 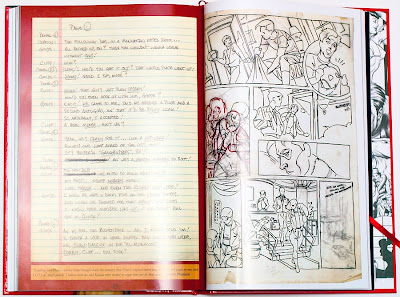 Enter IDW Publishing. Before Stevens' untimely death in 2008, the wheels were set in motion for a collected omnibus publication of all of Stevens' Rocketeer stories from the previous two decades. The Rocketeer: The Complete Deluxe Adventures is a magnificent book. I can't stress that enough. It's also quite costly at $75 retail (a non-deluxe edition, The Rocketeer: The Complete Adventures, can be had for around $20). I also feel obligated to point out there's the Dave Stevens' The Rocketeer Artist's Edition available for the bargain price of $250 (although it was initially offered by IDW for $100), which reproduces Stevens' page layouts with pencil marks, liquid paper and all the artistic detritus that comes with producing a comic. I'm not that hard-core. But what does the deluxe edition bring to the table that the other doesn't? Lots. First of all, it's got a gorgeous, full-color slipcase, as seen two images up, and is oversized with lush, lush, lush artwork. Both of Stevens' completed Rocketeer adventures: The Rocketeer and The Rocketeer: Cliff's New York Adventure simply pop off the page with all-new coloring by Laura Martin. Every single page could be framed as a work of art. I'm telling you, it's that good. 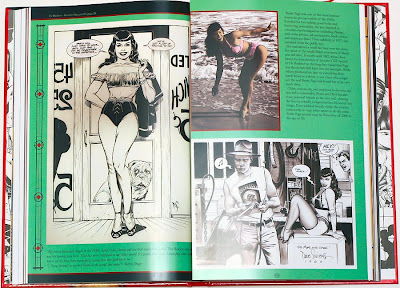 This book is a trove for Stevens fans. As you can see above, there are a generous number of page breakdowns along with Stevens' original, hand-written scripts on yellow legal pad. You don't get more authentic than this. While entire scripts aren't reprinted, and his breakdowns only give a hint to his fluid creative process, they're valuable reference material for aspiring comic writers as well as artists on how one particularly gifted creator made his magic. There's also a nice section on the legendary Bettie Page, the 50s pin-up icon who was the direct inspiration for Cliff Secord's girlfriend "Betty" in the comic. I don't know if any Rocketeer fans are unaware of the story by this point, but The Rocketeer helped revived mainstream interest in Page, eventually prompting Stevens to track her down and discover the former model (living in modest conditions) was not receiving any compensation from all the businesses profiting from her likeness. Stevens took on the role of her financial guardian of sorts, and Page was able to live out her life in relative comfort. It's a nice story, and reaffirms that people can do nice things for each other because it's the right thing to do. I also learned that B-movie "Scream Queen" Brinke Stevens (who also happens to be Dave Stevens' ex-wife) modeled for the iconic Betty photo session splash in the initial storyline's run. Learn something new every day. 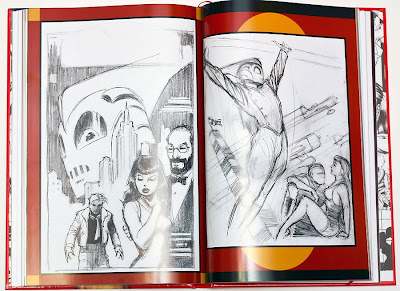 There's a host of pencil sketches, designs and memorabilia ideas packed into the book that makes me want to cry, they're so beautiful. There's one sketch for an unproduced metal sign Stevens worked up that I'd love to have hanging in my office. But the most distressing thing about the collection is how damn few Rocketeer stories ever got published. It seems like there should be a lot more, since Stevens first published his masterwork in 1982 and a pretty good movie adaptation came out in 1991. But Stevens only completed two storylines that together barely fill the number of pages we've come to expect for a "graphic novel." And even so, "Cliff's New York Adventure" is open ended, with Cliff and Betty's relationship issues unresolved and Cliff still on the East Coast with the ownership issues of the rocket pack unresolved. Stevens' gleeful obsession with pulp-era characters--populating his two Rocketeer stories with unnamed versions of Doc Savage and the Shadow--is a clear precursor to Alan Moore's League of Extraordinary Gentlemen--so it's no surprise that his next proposed storyline picks up directly after "New York Adventure" ends, finding Cliff in New Jersey and involved with another character that first appeared in 1938, Superman. And not just any Superman, but the Superman of 1938, as Siegel and Schuster created him, literally "faster than a speeding bullet, more powerful than a locomotive, and able to leap tall buildings in a single bound." As if that's not enough to get any comic geek's heart pumping, Stevens sets the epic team-up on Halloween, 1938. Yeah, Orson Wells' Mercury Theatre broadcast of "War of the Worlds." Except that the alien invasion is real, and the Rocketeer and Superman have to team up to save the Earth. And defeat a giant robot as well. Naturally, DC Comics turned the story down and it remains unpublished to this day. Philistines! But there is always hope. IDW Publishing has brought back the character with The Rocketeer Adventures, a mini-series anthology backed by an all-star lineup of talent. The collected volume is due out in November, and I can't wait to see what extra goodies are packed in there. Hopefully, this new mini-series will beget another, and perhaps even an ongoing. In a perfect world, we will never have to go so long between Rocketeer stories ever again, even if Dave Stevens is no longer around to share them with us.
Posted by Jayme Lynn Blaschke at 2:42 PM

Email ThisBlogThis!Share to TwitterShare to FacebookShare to Pinterest
Labels: Dave Stevens, The Rocketeer

Thanks for this. I'm very much a Rocketeer fan (still have my lapel pin from the movie premiere) - but, while I'd really like to possess that $250 artists edition, I'd much rather have a rocket pack.

One reason I think the whole thing works is that the era in which it is sent is one in which "anything was possible". Within that context we're not concerned with fuel consumption, aerodynamics et al.

Interestingly, regarding the proposed 3rd story: Martian invasions seem to be on a strict 40 year cycle (111, 71, 31 years - the novel, the radio play, the album), so perhaps we'll see that comic come 2018.... (http://rimworlds.com/theclassicsciencefictionchannel/?p=4745)

We can only hope! DC goes through periodic phases where they rediscover brilliant proposals they'd canned previously and suddenly find a way to make them happen (usually when the property, team-up or writer/artist becomes very popular). I wouldn't be surprise to see this happen some day, maybe as a joint publishing venture between DC and IDW. If so, Chris Roberson would be my first choice to script that third issue from Stevens' outline. Chris has already shown he can write an analog of the 1938 Superman to great effect.

Oh this is awesome!! I absolutely adored The Rocketeer film when I was a kid and had no idea 'til now it was a comic!! Time to go shopping for the library...!