A week of smirking at the North Korean cult on full funereal display is coming to an end. Elvis has left the building in style, his smiling bouffant gaze atop an armored 1974 Lincoln rolling the powdered streets of Pyongyang. The videos of the mourning citizens are pretty intense—powerful evidence of an authentic "God is dead" sentiment among at least some of the people.

The Team America gag isn't so funny when you see those people on their knees bawling in the snow. That state casts a spectacular spell over its population.

North Korea is the last sideshow freak of the geopolitical carnival. Watching the twenty-something son try to exude charismatic leadership, you have to wonder if the show will go on without its master carny. More broadly, here at the end of a year of fallen autocrats, one can't help but think that species—the eccentric dictator leading a cult of personality—is endangered as network culture replaces kings with the leaderless multitude.

But network culture produces its own personality cults, as the past three months proved with the mass media deification of Steve Jobs. Even as we celebrate the use of 21st century social networks to topple tyrants long thought permanent, we worship the Prometheus who gave us the glowing screen that allows us to participate in the network. His unsmiling face is everywhere, in that black and white photo adorning the well-timed official biography, the John Lennon of techno-capitalism. 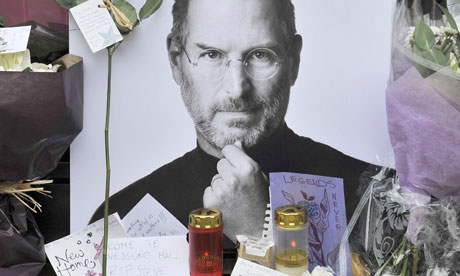 Even Jobs' Wikipedia entry reeks of this taint, with a creation story of elusive parentage and mystical journeys to the East. Chandu returns with the magic of the yogis, and manages to lock its power inside his lucent white devices. How will the iPhone designers fare as the semiotics of divinity wisp away like cremains in the breeze? Will He be reborn in some even more powerful form, like Gandalf?

Ask Muammar Q: the late medievalism of the militarized nation state maintaining power a personality cult seems unsustainable in the emergent era of network-enabled participatory democracy. But the American business corporation is a different animal than the Westphalian sovereign, an even more primitive emulation of the warlord-controlled band. The personality of the CEO dominates the culture of all corporations; less often does it infiltrate the culture through the corporation's products and brand. The wailing Apple Store walls suggest that will change, as Capital figures out the power of putting wizard-priests in charge instead of warlords —the sorts of messianic, wonder-seeking personalities that seem to thrive in periods of great instability and change like the one into which we have recently entered.

Imagine the Steve Jobs of biotechnology—the one that gives us new organs that enhance our lives in ways we cannot now imagine. (He might even be more Yoko than John.) That is the model for the personality cult of the century to come. Maybe if we look for him, like the scouts that find the new baby lama, we can see him coming. And remember the koan.

If you see the Buddha on the road, kill him.

Posted by Christopher Brown at 9:39 AM