Of gorillas and gasbags 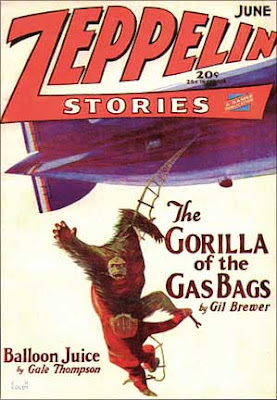 So, Armadillocon has came and went, and everybody else in the whole of creation has posted their thoughts and comments about the convention except me. Par for the course, I'd say. I've got a larger wrap-up coming, but I'd like to focus for the moment on Friday night's "Gorilla of the Gasbags" story challenge panel. As I mentioned last week, Joe Lansdale threw out a challenge a year ago to write a story centered around the cover of an exceptionally rare issue of Zeppelin Stories. We had one year to write them, and present the finished product at the panel in question.

Quite a few folks turned out with stories, myself included. "Prince Koindrindra Lives" is a direct sequel to my story "Prince Koindrindra Escapes," which appeared in Cross Plain Universe back in 2006. Except, since I'm not a particularly fast writer, and I'd only completed the first draft of my Chicken Ranch book the week before, I didn't get mine completed. Specifically, I wrote about 11 pages of what will probably be a 30-page tale once all is said and done. Everybody else finished theirs. Or at least claimed to. I'm not going to accuse anyone of bending the truth a bit, but those folks who hung me out to dry know who they are. 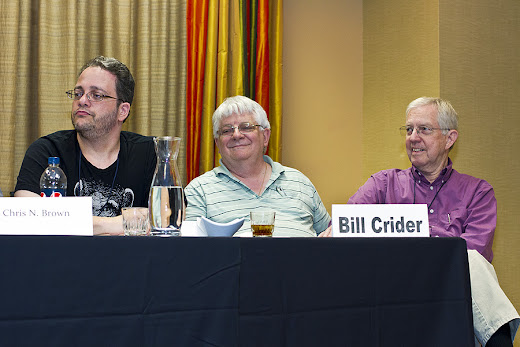 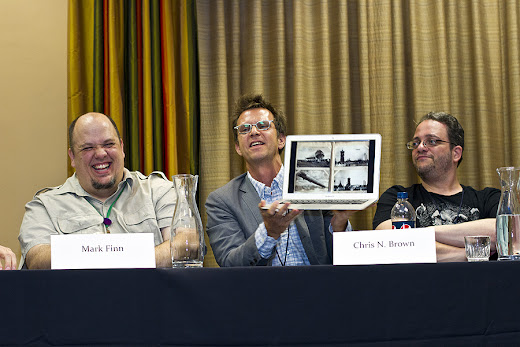 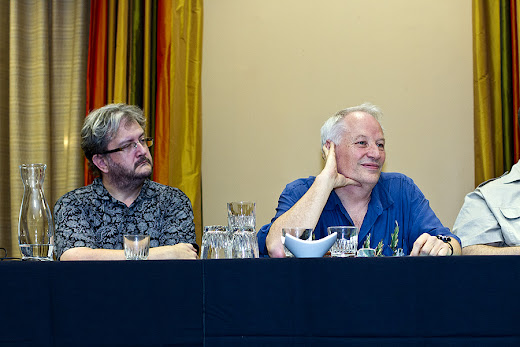 Bill Crider lapped the field by writing two stories on the topic. Edgar Rice Burroughs was a popular touchstone, and Mark Finn got in a jab at L. Sprague de Camp. Chris Brown wowed everyone with the revelation that his grandfather actually worked in a German Zeppelin factory, and had a trove of artifacts and souvenirs from those days. Chris also went against the grain by writing a borderline-pornographic innuendo-laden story based on the secondary "Balloon Juice" title from the pulp cover. It was, I must admit, magnificent. I ended up reading several pages of Neal Barrett, Jr.'s story, as he couldn't make the panel (it's a corker!) as well as a little more than half a page of mine. I got lots of compliments afterward about my reading, but I found it a tad troubling that some folks hadn't realized I'd done two separate readings (Neal's and my stories both had strong 1930s German elements to them). To clear up any further confusion, here is what I read (it might help to know that Koindrindra is a 30-foot-tall ape who has just skydived along with 100 or so paratroopers into Castle Neuschwanstein):


Koindrindra had barely taken two steps toward the keep when the giant doors exploded open, propellering through the courtyard to embed themselves in the Palas wall. The very force knocked Koindrindra back. He stared at the keep, not believing his eyes. Through the smoke-filled doorway, backlit by a hundred work lights, rumbled a massive... something. Mounted on a twenty-foot armored tank chassis, a sectioned cylindrical torso rose with a black Iron Cross emblazoned across the chest. One either side of the armored cylinder extended two jointed, hydraulic arms. One ended in a vice-like clamp, the other in a still-smoking gun barrel. Mounted atop the torso, more than thirty feet high, sat what could only be described as a head, ape-like in design. The mad Fritz could not win against Koindrindra on the field of battle, so they'd build a mechanical abomination to do it for them. Panzer Affe!

Amazingly, every single story fragment read came off as solid, quality literature. Don Webb actually recited his from memory, as he'd forgotten his manuscript. Amazing. This really needs to be anthology, as the stories ranged widely in tone and theme. I'd certainly buy it. 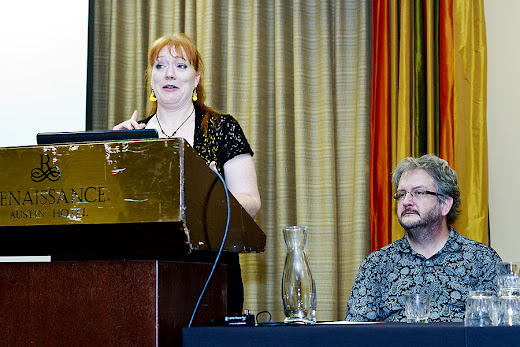 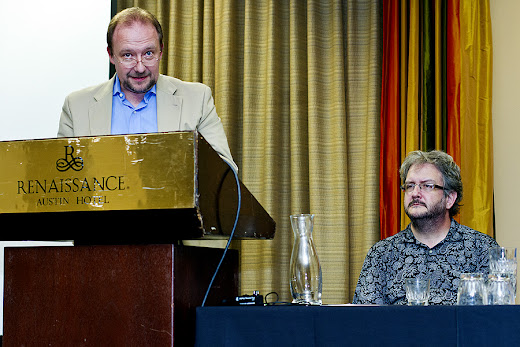 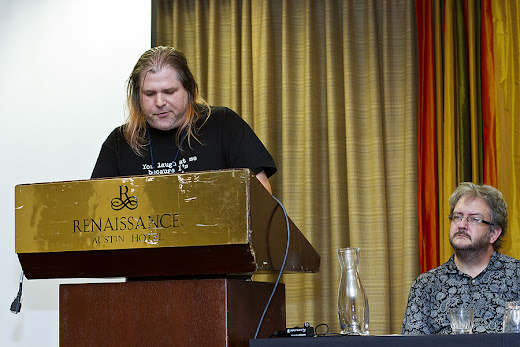 I added an image of the original cover that I had in my laptop, and corrected the name of the anthology (Cross Plains Universe rather than Lone Star Universe). Hope that's cool!

I should also remind folks of the amazing post by our colleague Jess Nevins that started this all a couple of years back: THE ZEPPELIN PULPS.

Thanks Chris. I was a little punchy when putting this together, and made the Lone Star Universe mistake several times. Good add with the pulp cover. Balloon Juice!

By the way, Jayme, I loved your Prince K story ever since I read it at Turkey City, and am really excited to see you returning to that material. You have a particular gift for this stuff. Now maybe you need to have the story where some classic pulp characters visit La Grange...

Appreciate the kind words. Prince K looks to be a trilogy before all is said and done, but alas, not a novel-length one.

And I certainly hope to find a use for the past three years' worth of research beyond the book. I've thought a period murder-mystery, ala Lansdale's THE BOTTOMS, might work well, but that's pretty far outside of my wheelhouse.

I was thinking something like the stories in Paul Di Filippo's Lost Pages collection where you mix a lowbrow and highbrow influence, like his story "The Jackdaw's Last Case" where Franz Kafka is a masked crimefighter akin to The Shadow/Batman. For some reason the specific idea that jumped into my head was Doc Savage and his crew driving across Texas (or flying in their dirigible) and need to stop (or maybe they are chasing down the Mad Oil Baron)...

Well, I've had a vague notion that Charles A. A. Dellschau and Jacob Broadbeck could pay a visit in the 1880s, but that's only a set-up. What to do with the story from there is the sticking point...