There’s a Zucker born every minute

Tumblr Flickrs out just when it's getting good. Twitter evolves into a big media cacophony filled with commercial stalkers working it for an angle.  Facebook works on cracking the human genome of product placement, helping the advertising bots infiltrate the few remaining social relationships that aren't just transactions in disguise.  How is it that we are allowing our self-expression and our friendships to be harnessed as the wageless fuel of the new platforms of our commercial exploitation—as both workers and consumers—without any real resistance? [Pic: Sergey and Larry and their adult supervision, sharing the wisdom their algorithms derived from your shopping habits.]

Contemporary American culture venerates the entrepreneurs who create the new corporate commons in which we now spend most of our work and leisure time—the mall inside our screens. The Founders who make it all the way to an exit—whether the kind of exit investment bankers talk about, where you get liquidity in your founder’s stock through an IPO or sale at some stratospheric valuation that defies rational valuation metrics, or the kind they talked about at Steve Jobs’ funeral—receive a kind of beatification into a peculiar category of neo-capitalist celebrity beyond reproach.

[Pic: The Founder, shortly before the moment of his canonization.]

Now matter how saintly the founders seem, the development of these new arenas of network life as for-profit ventures is inherently conflicted and corrupted. A “community” founded on the fiduciary duty to maximize the financial self-interest of its owners is not a community. It is a business that has tricked its labor force and suppliers into thinking they are its customers. Why does the future need to follow the robber baron model of organization? Do our new communities in the clouds really need to be structured as business corporations, which have the pyramidical governance structure of military warlord bands? Why can’t they be structured as cooperatives, in which the users are also the owners, and the governors? Or maybe an entirely new model founded on a socio-economic contract compatible with the operating system of the network and the diverse interests of its participants?

There appear to be a few folks trying to explore this idea, but none that’s really nailed it. We need to think about social media platforms as incipient polities instead of capitalist cults. As we digest the mass media supplication to David Karp’s personal redemption through the accumulation of $200 million of fuck you money selling this beautiful platform he built to the barons of Silicon Valley, we should be looking for alternative paradigms to the hypercapitalist founder cult. Rockefeller, Vanderbilt, Carnegie, Gates, Dell, Musk, Brin/Page aren’t the only models, no matter how much cool stuff they are funding with their fortunes. One place to start is the mostly abandoned thread that followed the thinking of people like Robert Owen.

The antebellum cooperatives were experiments in utopian socialism, and mostly ended up in the graveyards of other failed American utopias. But there are surviving models that seem very healthy—enterprises like REI, Amana (before it ultimately went corporate), and the housing coops of NYC. If the movements of the Arab Spring could overthrow their governments without charismatic leaders or figureheads, why can’t the online multitude experiment with collective ownership of the realms where we incubate our own 21st century identities? Surely it’s at least worth trying to develop some user-controlled alternatives, letting them compete with the corporates, and see how things play it.

[Pic: New Harmony, a real manifestation of an alternate Indiana.]

Or we could just resign ourselves to live in a world that looks like an endless wander through the corporate-branded hallways of LinkedIn—the kind of world where we all wear clothing with the logos of our corporate employers when we’re out with our families. Zo long, Zuckers! 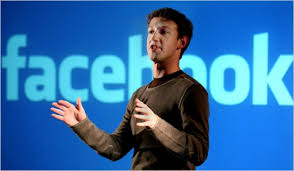 Recommended reading: MacKenzie Wark in The Guardian, May 22: Who dares to dodge Google's information tax? In exchange for giving up our personal data, we get to watch each other's cat videos, while Google becomes the new state.

Posted by Christopher Brown at 9:34 AM