Attack of the Feral Hogs 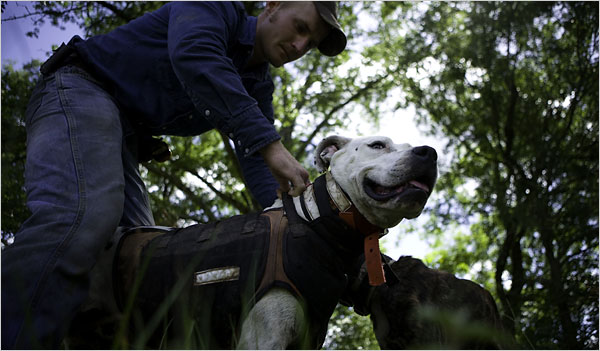 Further evidence that Joe Lansdale is now reporting for the NY Times from East Texas, under a pen name: today's front page features an article about good old boys hunting feral hogs from golf courses on the far side of Houston.

The preferred method for Clint and Dusty, the hard-working dudes featured in the article, requires an ATV, a knife, a Marlin .30-30, a good buddy, your daddy, your buddy's daddy, and seven pit bulls wrapped in Kevlar. 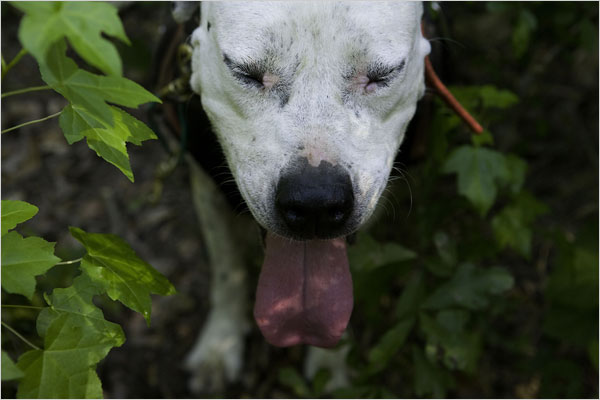 These are dark, bristled creatures with sharp tusks, long snouts and fleet hooves. They descended from the unholy union of swine introduced to Florida by conquistadors, domestic pigs escaped from farms and Eurasian wild boars released by hunters. They can grow to three feet high and weigh as much as 400 pounds.

Capable of breaking through fences, the hogs dig up the earth rooting for grub worms. They run pickup trucks off the road. They prey on young livestock and woodland creatures. They carry disease. They gestate in four months and deliver litters of a half dozen.

But a landowner’s menace can be a sportsman’s delight. Even to old hands, wild hogs have proved hard to kill and harder to catch. They recognize traps. They move at night. They run quickly over short distances. They evade hunters in the thick brush. When pursued, they lead dogs into the water to drown. Failing that, they back up against a rock or a tree to fight. 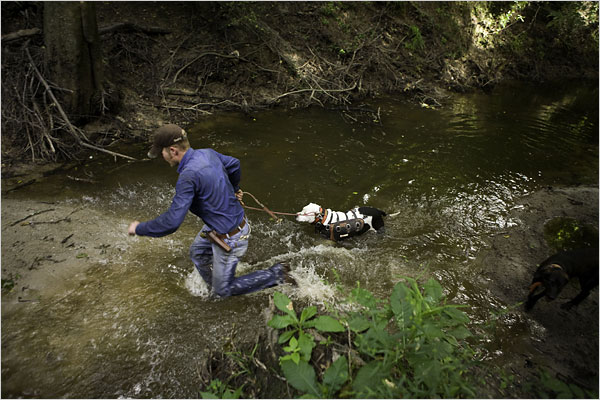 Casting about for a more methodical approach [to eliminating wild hogs from his property], [Blaketree National Golf Course manager Scott] Cory was referred to [Clint] Watson, 33, a bulldozer operator who culled hogs from nearby ranches in his spare time. Mr. Watson had been building traps with [Dusty] Kennedy, 25, a student of construction management who had married into his family. They charged landowners $200 for the traps, keeping the right to sell their catch at slaughter for 25 to 30 cents a pound.

For this more sporting endeavor, Mr. Kennedy and Mr. Watson reached somewhat casual terms with their clients. The golf course, for example, provided free food and tee times, and the use of a cottage for their services.

Mr. Watson and Mr. Kennedy are quiet, reserved young men who carried knives on their belts and wore brown caps with references to a Bible verse: “God said unto them, Be fruitful, and multiply, and replenish the earth, and subdue it, and have dominion over the fish of the sea, and over the fowl of the air, and over every living thing that moveth upon the earth.”

On a morning with a forecast calling for nearly 100 degrees, Mr. Kennedy ate a breakfast of fried pork chops, put on jeans and long sleeves to protect against the brush, and set out around 3 a.m. At a shuttered filling station, he joined Mr. Watson. Their fathers, Bill Kennedy and Billy Watson, were along for backup.

Hauling coolers, ATVs and cages, their convoy rolled up Highway 90 in the starless blackness.

“When we first started, we went a long time without catching a hog,” Kennedy said. “I didn’t think we were ever going to catch one.”

Though a Marlin .30-30 rested by his knee, Mr. Kennedy had no intention of firing a shot. Cornering a hog was the job of the bay dogs, Toby and Buck, the bitch Fire and the pups, Whopper and Nub. Then the hunters would release the catch dogs, Josie and Roadie, to hold down their prey. Next it would fall to Mr. Kennedy and Mr. Watson to restrain the hounds and tie the hog. If all that failed, if a hog broke loose and went careering toward the road, the older men would make the kill with the rifles.

Not far from the town of Bedias, the caravan crossed a cattle guard onto a ranch owned by friends of Mr. Watson. The men fitted the bulldogs with layered vests of Kevlar and the bay dogs with four-inch nylon collars to protect their jugular veins. The hounds stood and tested the air, their yelps mixing with the croak of tree frogs in the yaupons.

“Oh, they know it’s fixing to be on,” Bill Kennedy said.

In the gray dawn, the hunters made their way through a thicket of greenbriers, wild lemon trees and bloodweeds. Nearby, the dogs began to yelp. The men gave chase, then waited as the sound died. Around them the trunks of small trees were marked with mud rubbed from the backs of wild hogs.

In time the men came to a clearing, paused for a dip of snuff and checked an electronic monitor for the whereabouts of Fire and Nub. Though their short sharp yelps were resounding, indicating they had bayed a hog, Fire and Nub had failed to summon the other dogs. The hounds seemed to believe this was a false alarm owed to Nub’s youthful enthusiasm.

Mr. Kennedy took the lead with the dogs. Mr. Watson stayed behind, listening. In the distance, the measured barking ended with an awkward yelp.

Through a walkie-talkie, Mr. Watson called for a report. “They was working on something, Whopper and Nub, but they ain’t got it bayed yet,” Mr. Kennedy responded. “I’m thinking about going in there, but I want to get more bay dogs in there.”

Mr. Watson moved toward the sound, then stopped. “Hey Dusty,” he radioed, “I smell a big old boar hog.”

The barking sounded again, and Mr. Watson charged through underbrush worthy of machetes.

Presently, Mr. Watson came upon Mr. Kennedy, red-faced and sweaty, covered in mud, bleeding from a cut that ran halfway across his cheek. Whatever his dogs had been chasing seemed to have gotten away. Mr. Watson called in the others.

The dogs emerged with no cuts or scratches. “No proof of a hog, anyway,” Mr. Watson said, kneeling to pat them.

It was 8 a.m. The older men were worried about the dogs in the sun. Mr. Watson proposed a search around the perimeter of the property. For hours, the hunters stomped through thickets and along creek beds. Following a riverside trail, they found a blue heron, a copperhead and a family of alligators.

“There just ain’t no hogs out here,” Mr. Watson said.

I bet they're laughing in Manhattan over that one. And I bet Clint and Dusty are having more fun.

Enjoy a lazy Saturday on that. 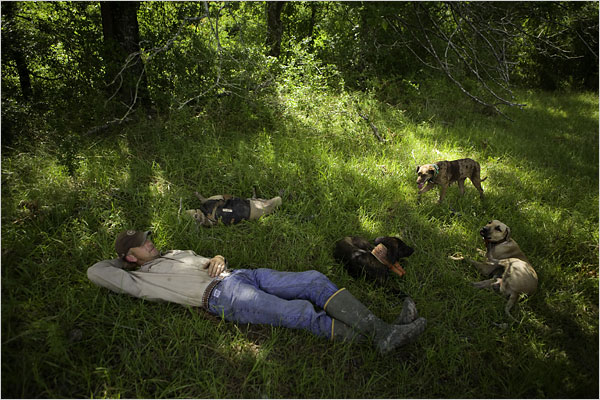 Posted by Christopher Brown at 8:52 AM