Happy Texas Independence Day. When you live in Texas, the only state that has its own revolutionary creation myth (as well as its own music, cuisine, attire, and even vehicle), you can't help but get the sense that, 175-plus years later, the descendants would do it all over again. The mythology is deeply internalized in a state where all schoolchildren get a full year of Texas history every other year from grade school through middle school. Believe me, they have the guns and the off-road vehicles and the fuel and the attitude all covered.

And when you follow the events just across the Rio Grande, you can't help but wonder if some other Mexican states aren't about to devolve into their own quasi-independence, if more along the lines of 21st-century rogue states than a 19th-century exercise in imperial adverse possession. Chihuahua, Coahuila and Sinaloa all sound like they are on the brink, while on the gringo side the economic downturn takes anti-immigration hysteria to new heights (though not so much in Texas). Just take the microcosm of El Paso-Ciudad Juárez, where you have the imminent narco-city state on one side of the river and one of the largest collections of U.S. military installations on the other side, from Ft. Bliss north to White Sands and Alamogordo. It doesn't take much of a science fictional imagination to envision degeneration over the next decade into warlord mayhem with competing factions of Federales. Ejercito Mexicano, Cartel paramilitaries, West Texas sheriffs, U.S. Army, and citizen militia from both sides fighting it out for territory and order.

In otherwords, imagine some mutant melange of Black Hawk Down, Bring Me the Head of Alfredo Garcia, El Mariachi, and RoboCop. I would totally shell out eight bucks to watch that. Even more exciting, I may get to live it.

NYT: March 1, 2009
With Force, Mexican Drug Cartels Get Their Way
By Marc Lacey

CIUDAD JUÁREZ, Mexico — Mayor José Reyes Ferriz is supposed to be the one to hire and fire the police chief in this gritty border city that is at the center of Mexico’s drug war. It turns out, though, that real life in Ciudad Juárez does not follow the municipal code.

It was drug traffickers who decided that Chief Roberto Orduña Cruz, a retired army major who had been on the job since May, should go. To make clear their insistence, they vowed to kill a police officer every 48 hours until he resigned.

They first killed Mr. Orduña’s deputy, Operations Director Sacramento Pérez Serrano, together with three of his men. Then another police officer and a prison guard turned up dead. As the body count grew, Mr. Orduña eventually did as the traffickers had demanded, resigning his post on Feb. 20 and fleeing the city.

Replacing Mr. Orduña will also fall outside the mayor’s purview, although this time the criminals will not have a say. With Ciudad Juárez and the surrounding state of Chihuahua under siege by heavily armed drug lords, the federal government last week ordered the deployment of 5,000 soldiers to take over the Juárez Police Department. With the embattled mayor’s full support, the country’s defense secretary will pick the next chief.

Chihuahua, which already has about 2,500 soldiers and federal police on patrol, had almost half the 6,000 drug-related killings in all of Mexico in 2008 and is on pace for an even bloodier 2009. Juárez’s strategic location at the busy El Paso border crossing and its large population of local drug users have prompted a fierce battle among rival cartels for control of the city.

“Day after day, there are so many horrible things taking place there,” said Howard Campbell, an anthropologist at the University of Texas at El Paso who studies Mexico’s drug war. “The cartels are trying to control everything.”

Nothing is surprising in Chihuahua anymore. Gunmen recently shot at one of three cars in Gov. José Reyes Baeza’s motorcade, killing a bodyguard and wounding two agents. The drug cartels routinely collect taxes from business owners, shooting those who refuse to pay up. As for the Juárez mayor, who has made cleaning up the notoriously corrupt police department his focal point, the cartel recently threatened to decapitate him and his family unless he backed off.

The handwritten threat that it issued went further than that. Like many people in Juárez, Mayor Reyes has homes on both sides of the border, splitting his time between El Paso and Juárez. The note threatening him made it clear that the assassins going after him would have no qualms about crossing into the United States to finish off the mayor and his family.

“We took the threat seriously,” said Chris Mears, a spokesman for the El Paso Police Department. “I’m not going to tell you what actions were taken, but we’ve taken actions.”

In an interview in his wood-paneled office overlooking the United States, Mr. Reyes, 46, whose father was mayor in the early 1980s, said he was not going to allow criminals to run the city, despite the inroads they are making. He said he initially opposed his police chief’s decision to resign because he did not want the outlaws to feel empowered. He acceded only as a life-saving gesture, he said.

“I’m not going to give in,” he vowed in an interview, welcoming the arrival of soldiers so that the traffickers will feel the heat even more.

Right now, the Juárez police are no match for the outlaws. Last year, the senior uniformed officer was killed, one of 45 local police officers killed since January 2007, and a former police chief pleaded guilty to charges of smuggling a ton of marijuana from Juárez to El Paso. Mr. Orduña, who lived at the police station to avoid being killed, had replaced another chief who fled to El Paso after receiving threats last year. If the army had not come in, the mayor would no doubt have had a difficult time finding somebody to head the department.

Introducing a nationwide police recruitment campaign, the mayor has raised salaries and benefits enough that he is attracting new recruits to replace the many officers being fired for their links to organized crime.

“I know the dangers and I accept them,” said José Martín Jáuregui López, one of the 289 cadets now being trained at Juárez’s police academy. “There are a lot of people afraid for me: my mom, my relatives. But this is what I want to do.”

As a sign to the traffickers that he was not running from them, Mr. Reyes appeared Friday to be like any other mayor, giving a speech at the opening of a shopping center, signing a memorandum of understanding with a developer, reassuring residents that he would keep loiterers from gathering in front of their homes.

But the bodyguards holding assault rifles who clung close to him made it clear that Juárez remained a city under siege.

“There’s no square inch of the city that has been untouched by the violence,” said Lucinda Vargas, an economist who works by day to remake the city as executive director of Juárez Strategic Plan, but retreats to El Paso at night. “There’s a lot of evidence that Juárez, in a micro sense, is becoming a failed state. But I still think we haven’t failed yet and that we could still rescue ourselves.” 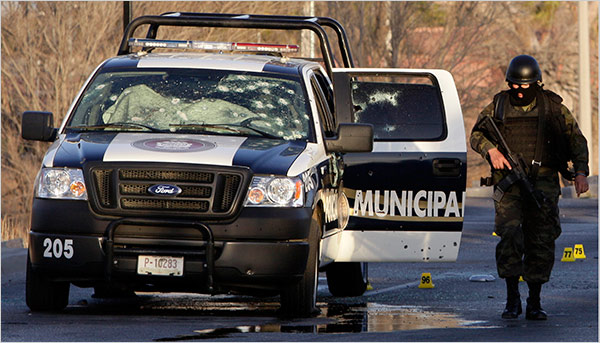 Posted by Christopher Brown at 8:09 AM