The old style of movies

There's something particularly satisfying about a modern film shot in an anachronistic style. Canadian filmmaker Guy Maddin has made a career of it. One of his recent films, a travelogue "documentary" about Winnipeg, is no different. It's a surreal black and white exploration of the sort of impressionist filmmaking that went out of style with the talkies.

"My Winnipeg" particularly resonated with me, because it's about feeling trapped in a provincial town that is almost by definition dull, yet trying to find the hidden wonder in something that is small and everyday and very, very familiar. Guy Maddin talks about the ghost Winnipeg, the city that lies beneath the real city and has been there since the time of the Indians and the fur trappers. I had a similar notion about Madison when I lived there, that there was a counter-Madison that intersected the real Madison in out of the way corners of certain parks late at night.

But even in the dullest of towns, amazing things happen from time to time.


My Winnipeg has extensive digressions into the nuances of Canadian hockey, but it's a watchable film nonetheless. I'm just waiting for Guy Maddin to make a sci-fi epic like the 1936 Things to Come or this movie, The Fabulous World of Jules Verne:

This was another tip from the inestimable Lawrence Person , who mentioned it on the 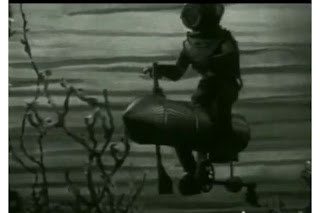 steampunk panel we did together. It's a Czech movie, because nobody makes weird animation quite like the Czech. The titles claim it was filmed in "Mysti-Vision". Which means that despite being filmed in the 1950s, it looks like a nineteenth century print plate come to life.

It's based on the Jules Verne novel Facing the Flag that most people haven't heard of, because it seems like a rip-off of 20,000 Leagues Under the Sea, and it's apparently quite jingoistic. 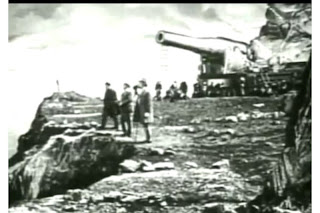 I found a youtube channel that has the whole film posted, which doesn't give the images the sort of resolution they deserve, but it gives a hint of how amazing they are.
Posted by Matthew Bey at 11:57 AM

You failed to mention the review Howard and I did:

Shoot. I keep forgetting to google "Lawrence Person (name of subject)" before writing any article.