The Groupthink of Snails 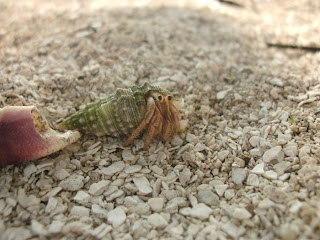 I spent last week in Belize, and while messing with the hermit crabs on the beach, I had a series of John Muir style observations. It started with the realization that hermit crabs are asymmetric. They have a definite lean to them. Their legs and claws are shaped in such a way that when they snap into the shell they’ve chosen as their personal armor, their body completes the spiral of the shell. You can see this fairly clearly in the picture I took of the cutest hermit crab ever, which should be easy enough to distinguish from the picture of the biggest and ugliest hermit crab in the world, which I was also lucky enough to find.

Which raised the next question, if hermit crabs fit tightly into a spiral shell, what happens when the threads are reversed? Can hermit crabs only screw into clockwise-coiled shells, or are there right-handed and left-handed hermit crabs? 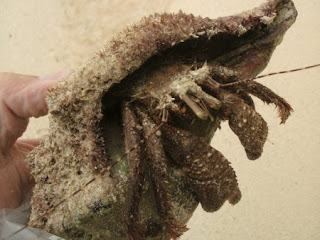 I scoured the beach and I only found clockwise-coiled shells, and whenever I raised the question with anyone, the only answer I got was a facetious “They only turn clockwise in the Northern Hemisphere.”

While I may be a genius in the style of John Muir, I was not the first to notice all the clockwise shells. Once I got back to civilization I asked the internet. The answer is 90% of all snail shells coil clockwise. The term is “dextral” or right-handed. “Sinistral” or left-handed shells are common in a few species, but nearly all gastropods have a dextral coil with rare sinistral mutants who produce a counter-clockwise coil that are highly valued by avid shell collectors (of course there’s a sub-culture of avid shell collectors, why wouldn’t there be?).

Few snails turn left-handed because a counter-spin to the shell makes it essentially impossible for their genitalia to fit with others of their species. Left-handed mutants don’t produce many offspring. From this simple mechanical limitation to snail sex comes the correlated adaption of hermit crabs. There are also snail predators with asymmetric jaws to make it easier to extract their escargot snack.

But this hasn’t always been a world of right-handed snails. In the fossil record there are periods when most snail species have the sinistral spiral. I couldn’t find an explanation for why species that have no genetic interchange would keep their left-right handedness in sync. Considering that the dextral-sinistral gene influences the process of speciation, by all rights there should be a near random spread of left-right spiraling throughout the gastropod family. 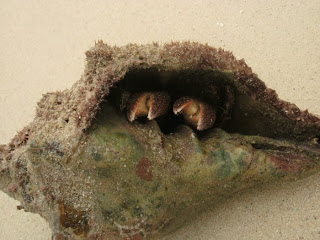 I can only conclude that there is an external influence that causes pan-species right-handedness, an influence that could just as easily extend as far up the evolutionary ladder as humanity. Perhaps there will come a day when the snails coil the opposite direction and our children are born left-handed, their livers sitting in the wrong side of their body.

It’s a world that will look much the same, but with a sinister twist.
Posted by Matthew Bey at 4:35 PM