People Who Deserve the Campbell More Than Me 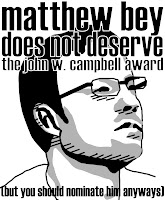 As those of you who are members of Worldcon know, the nominations for the Hugo and the Campbell award are now open, and the greatest responsibility in fandom now rests on your shoulders.

This is my first year of eligibility for the John W. Campbell Award for Best New Writer, and as I have vociferously proven, there's no way that I deserve it.

Which is why you will get such a cathartic rush by nominating me. Go ahead and try it. Nominating me for the Campbell is as thrilling as driving 50mph through a school zone.

Essentially everyone on the Campbell eligibility page is more deserving than me, but I would like to take a moment to highlight those folks who are particularly more deserving. 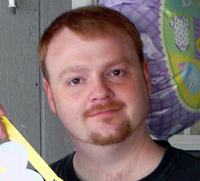 I worked with S. Boyd Taylor recently as we got his story "A Distant Sound of Hammer" produced for The Drabblecast. One of the most original zombie stories that's come along in a while, it elegantly capturing a sense of brutality and desperation. Norm posted my story "Snuggle the Dead" at the same time on the B-side feed because he thought it was a less gruesome counterpoint to Taylor's story, which has got to tell you how willing Taylor is to let it all hang out. 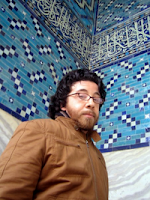 I've not actually read anything by Saladin Ahmed, but I have the feeling that he's going to take the Campbell award home, so I want to suck up now. He published in Beneath Ceaseless Skies twice to my once, so already you know he's more deserving.

J.C. Hutchins' profile declares that he's a "successful New Media storytelling pioneer" and he's not kidding. His 7th Son series put podcast novels on the map. For those of us who have long since devoured all the sci-fi books on tape in our local library system he's a life saver.

Nicky Drayden is exactly what the Campbell award means to celebrate: she's a new writer who has hit the scene with shocking force. She only started writing a couple of years ago, but her list of publications is already arm-length and growing longer. If you haven't seen Drayden's particular blend of style and humanity, then you should check out her dramatic visuals-enhanced reading of "You Had Me at Rarrrgg." 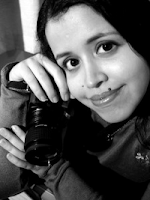 Silvia Moreno-Garcia is the brilliant mind behind Innsmouth Free Press, a thriving, throbbing, amorphous polypous publication of everything Lovecraftian. Aside from a rare misstep where she published my story Beneath the Red City, the quality of the site has been consistently high. 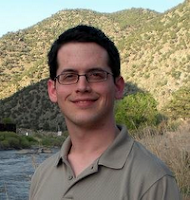 You need to keep your eye on David Steffen. He is an engaging and sophisticated writer with big things written all over him. His name keeps coming up and I'm sure that will only continue into the future.

So if you're a Worldcon member, please vote your heart, and by that I mean vote against common sense and nominate me for the Campbell. And while you're at it, you should consider jotting down RevolutionSF.com for best fanzine, and The Drabblecast and Space Squid for best semiprozine.

Oh, and if you have any suggestions for what I should put down in all those lesser categories, I haven't filled out my nomination form yet and I just realized I haven't read any new novels this year.
Posted by Matthew Bey at 1:53 PM

These writers are all gifted at their craft. But are they truly LIVING OUT an alternative reality? Try this to see how it is done: http://www.youtube.com/watch?v=um6q_j40Pl0