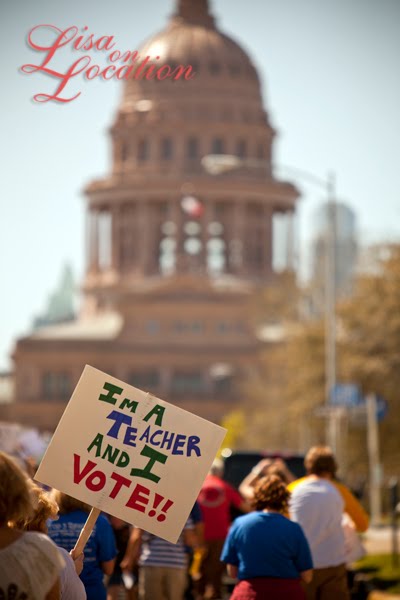 Why should Wisconsin have all the fun? Texas isn't known for its protest rallies. Folks around here generally aren't the radical types--even back in the days when the state was Yellow Dog Democrat, the population tended to have a conservative, don't-rock-the-boat outlook on society. So if you can get 10,000 Texans of all political stripe to turn out for a cause on a Saturday afternoon that doesn't involve high school or college football, well friends and neighbors, you know something's up.

The Wife and I packed up the kids this morning and made the trip up to Austin to participate in the Save Texas Schools rally. In case you've been living under a rock, Governor Rick Perry, in his infinite wisdom, has proposed a budget that cuts $10 billion from public education (and this doesn't even count the cuts to higher education, which is another issue entirely), which will result in nearly one third of teachers in Texas being laid off, and class rooms going from 22 students per to 40-50(!). The reason for these staggering cuts are simple: Texas schools are funded almost entirely by property taxes, and in 2006, Perry pushed through massive property tax cuts. Trouble is, he neglected to adequately compensate for those cuts with alternate funding sources, so Texas schools are facing a catastrophe of Perry's creation, and our dear governor is disavowing any responsibility. He's refusing to consider any new revenue sources, any new taxes, or tapping the state's $9 billion "Rainy Day Fund" to plug the shortfall until legislators can come up with a solution.

Fed up with Perry's stubborn refusal to deal with the problem in a constructive manner, not to mention the legislature's dithering, we--along with 10,000 of our closest friends--trekked to Austin for a march and rally to let our displeasure be known. What follows are some of the interesting photos The Wife shot during the day. This is only a small sample of them, though--check out her Save Our Schools photo gallery for more (there's some great stuff there, you really should check it out). 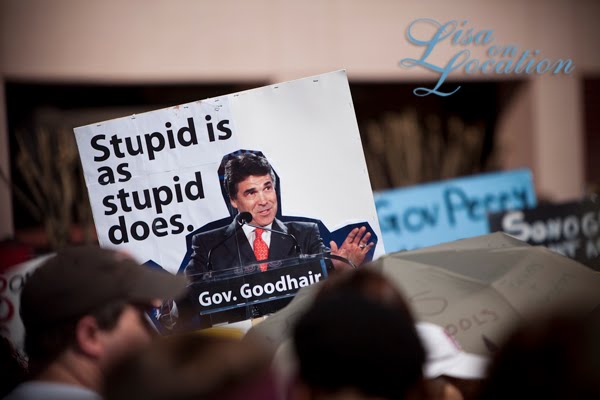 My contempt for Gov. Perry is well-documented. I was gratified to see that my feelings are shared by many. Of course, with any big rally, the signs are the most entertaining part. Texans are no less creative at this than others, and Lone Star pride was a running theme. Probably the most pervasive image was an updating of the famous "Come and Take It" flag, substituting a no. 2 classroom pencil for the original brass cannon. It didn't take long for the ubiquitous Charlie Sheen reference to make its way through the crowd, leaving a trail of laughter in its wake. 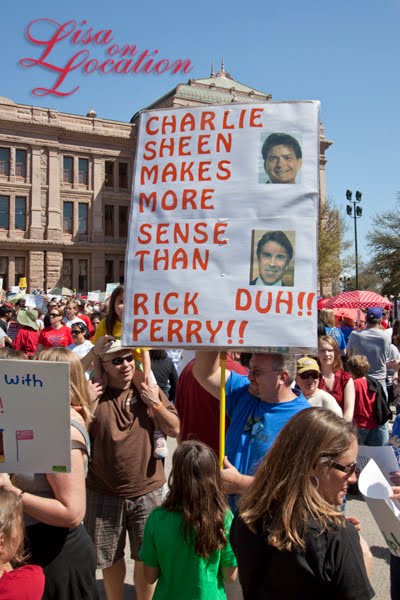 On thing I've seen online that troubles me is a dismissal of the rally, and by extension, all "Save Texas Schools" activity, as nothing more than greedy teachers union agitation. Why is this troubling? Because there are no teachers unions in Texas. At least not by any substantive measure. Texas is a right-to-work state, meaning unions here--as throughout the south--are impotent and mostly irrelevant. There is no collective bargaining, so Texas school funding deficit can't be blamed on any convenient union scapegoat (that's not to say certain parties haven't tried, though). 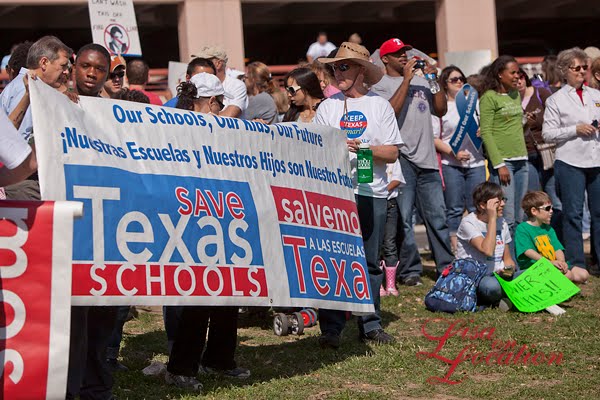 I've recently endured some unpleasant insults--both oblique and direct--regarding my stand on public schools in Texas. That public schools are a waste of money, home schooling and private schools are better, and public school teachers are essentially worthless. I tend to react strongly to this. I come from a teacher family. My father taught high school for 22 years, and after that served on the school board for the better part of a decade. For all his faults, he was dedicated to teaching. He educated students who didn't cotton to no learnin' and went out of his way to help out the less fortunate, giving summer jobs to the less fortunate and always managing to "accidentally" over-pay them while boosting their sense of self-worth. My wife comes from a teaching family, too, and my father-in-law was as passionate about science in the classroom as he was about giving his best to the track team he coached although they were hampered by woefully inadequate facilities. He then spent years working as an assistant principal, trying to ensure a solid education for all while dealing with transfers into his school of students who'd departed Austin ISD because of "discipline problems" who had no interest in education of any sort. 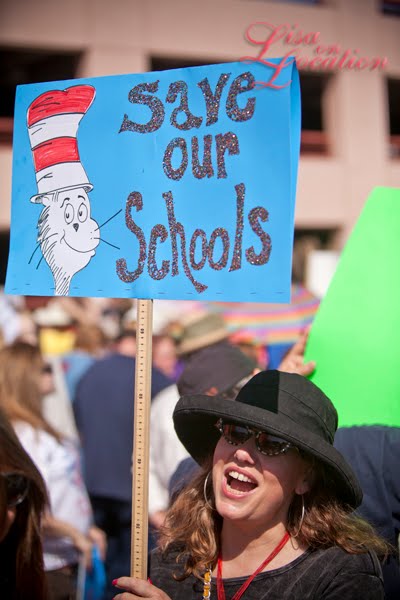 We have friends who are teachers--pretty much every teach who has ever had our children in class, going out of their way to engage and stimulate our daughters, giving them personal attention when they need it most. These same teachers thank us profusely when we send an extra box of tissue to school, since they're out in the classroom during cold season and there's no money in the budget to buy any more. Teacher who pay out of pocket for books to stock the classroom library, because, again, there's no money otherwise. Teachers don't go into teaching because of the glory, or the massive paychecks, or the cush working conditions. Teaching is a calling. That's something legislators and anti-public schooling types don't seem to grasp. So is it any wonder I take it personally when public school teachers are denigrated, and respond--forcefully--in kind? This is my stand, and I make no apologies for it. 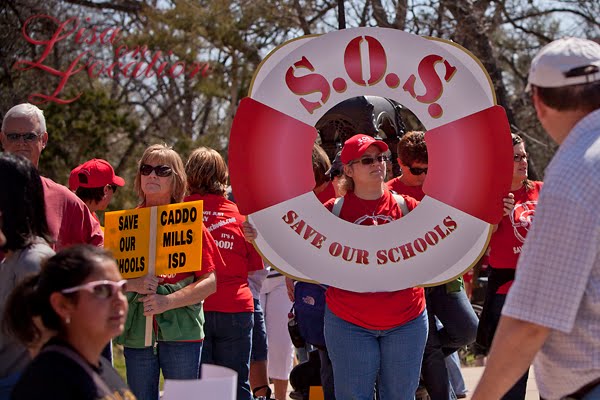 There was a time, no too long ago, when Texas Republicans and Democrats generally agreed on the importance of public education. That a strong public education system was the most valuable public good in the state, that and educated population meant a valuable population, attracting well-paying jobs and elevating business, the economy and ultimately social services. Somehow, somewhere, this went off the rails. Texas now ranks around 36th nationally for education spending per student, a ranking that would fall to 50th out of 50 states if Perry's budget plan passes. Texas students currently rank around 42nd nationally in the classroom, which prompts jokes about the Arkansas and Mississippi state legislatures passing resolutions that "Thank God for Texas!" 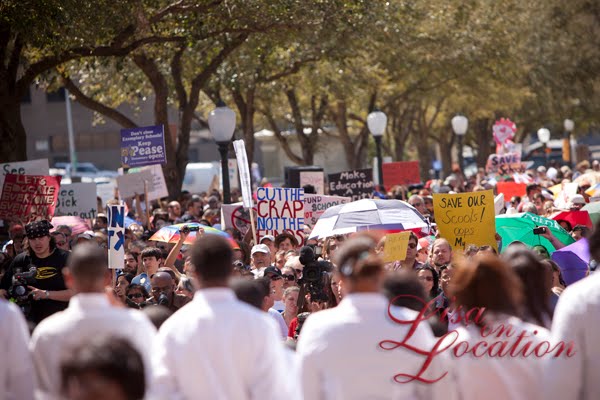 As I said earlier, around 10,000 people from across the state turned out for the rally. The kick-off march stretched seven blocks. There were buses everywhere. There were people from Houston, Austin, San Antonio, Fort Worth. One bunch drove all the way in from El Paso. There were teachers, parents, children, college students, grandparents, black, white, Hispanic... it was as pure a sampling of Texas' demographic as anyone could want. Everyone coming together for one purpose, to keep short-sighted politics from devastating Texas education for years to come. 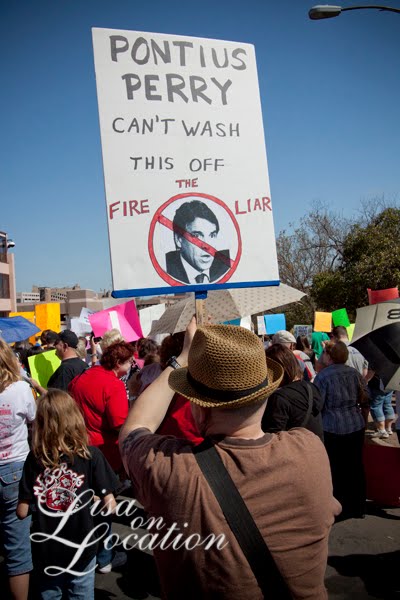 Earlier this week, Perry dismissed the coming rally, saying (with disingenuous flair), "The lieutenant governor, the speaker and their colleagues aren’t going to hire or fire one teacher, as best I can tell. That is a local decision that will be made at the local districts." That smarmy, condescending comment immediately brought to mind Pontius Pilate famously washing his hands. A little melodramatic, of course, but the imagery is vivid nonetheless. 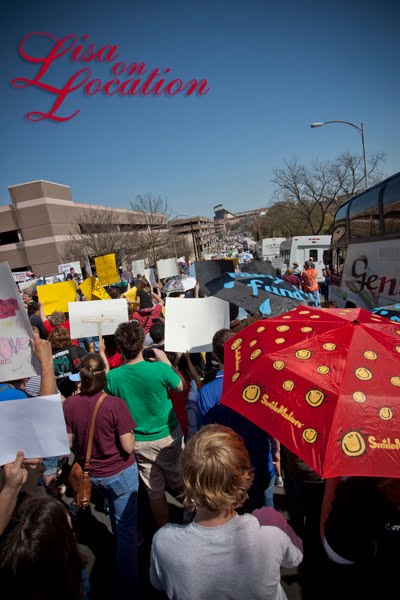 Umbrellas were out in full force, symbolizing the demand that the legislature tap the state's $9 billion rainy day fund. Were the great Stevie Ray Vaughan still alive, he'd surely be singing "It's Flooding Down in Texas." What wasn't out in force was the Tea Party types. Online chatter had them staging a counter-rally to praise Perry for his hard line against, well, I suppose teachers and those darn pesky student who want to learn. Although The Wife and I looked for them, we never saw any. We saw a few "Don't Tread on Me" flags, but these were usually paired with "Come and Take It" flags, so I don't think they counted. 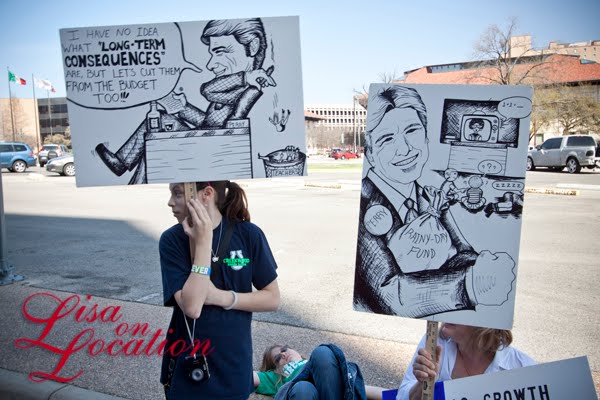 All in all, it was inspiring to see so many Texans, from all walks of life, turn out to show they care about education. The United States is great because of education--the G.I. Bill following World War II produced the single most educated population in history, an advantage that took 60 years for the rest of the world to catch up to. Home schooling works for some, private school for others, but as a state, as a nation, these are not solutions that will render us competitive on a global state. Public education is the key to the future success of America, and we've got to strengthen our schools and reverse the appalling dropout rates rather than eviscerate the education budget and vilify our teachers. I'm teaching my children the value of education, and how to be a part of the solution, not part of the problem. The rally today was a tiny step in that direction. 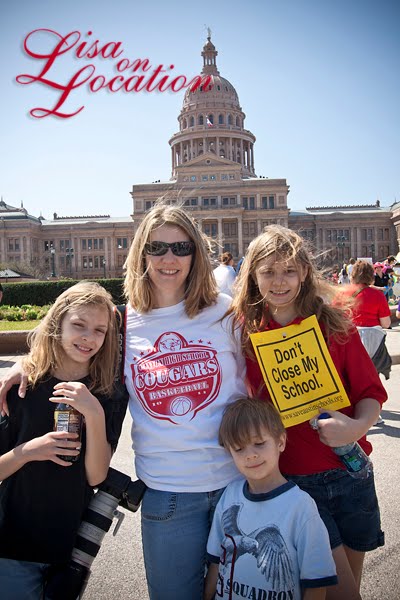 Sec. 1. SUPPORT AND MAINTENANCE OF SYSTEM OF PUBLIC FREE SCHOOLS. A general diffusion of knowledge being essential to the preservation of the liberties and rights of the people, it shall be the duty of the Legislature of the State to establish and make suitable provision for the support and maintenance of an efficient system of public free schools.

Let me close with a portion of Perrin-Whitt CISD Superintendent John Kuhn's amazing speech on the importance of public education. Kuhn is he of the eloquent open letter on behalf of all public education, which should stir the heart of any true Texas.

Where's Sam Houston when you need him?