I was struck the other day, upon reading this opinion piece within the peachy electronic pages of the Financial Times from UBS senior staffer George Magnus, by what an unusual clarion it was to find within the four corners of a business newspaper:

Financial bust bequeathes a crisis of capitalism
By George Magnus

Financial markets have had a torrid summer of breaking news about slowing global growth, fears over a new western economic contraction and the unresolved bond market and banking crisis in the eurozone.

But these sources of angst have triggered turbulence before, and will continue to do so. Our economic predicament is not a temporary or traditional condition.

Put simply, the economic model that drove the long boom from the 1980s to 2008, has broken down.

Considering the scale of the bust, and the system malfunctions in advanced economies that have been exposed, I would argue that the 2008/09 financial crisis has bequeathed a once-in-a-generation crisis of capitalism, the footprints of which can be found in widespread challenges to the political order, and not just in developed economies.

Markets may actually have twigged this, with equity indices volatile but unable to attain pre-crisis peaks, and bond markets turning very Japanese. But it is not fashionable to say so, not least in policy circles.

The basic theme is not that unusual—plenty of economic doom scenarios can be found throughout the mainstream media these days. What is so unusual is the way the diagnosis is expressed in Marxist terms—"crisis of capitalism" being part of the core lexicon of Capital, a term whose use reveals training in those texts as part of one's toolkit for understanding the contemporary world. To openly state that we are experiencing a "once-in-a-generation crisis of capitalism" is to summon all the Hegelian world historical eschatology of Marx—the idea that there are underlying forces in tension, that will ultimately lead to an endpoint of the current period, and some (hopefully better) period on the other side of the long apocalyptic night.

I find the use of this lexicon very refreshing. Not just because of the gravity it invokes, but also because it reveals a healthy intellectual diversity that is largely unknown in the U.S. While anyone who studied economics or politics in the UK (at least before 1990) would have learned a healthy dose of Marx, you would be unlikely to easily find it in any American curriculum other than perhaps European intellectual history, or a dismissive sidebar in your introduction to classical microeconomics.

We just talk about "business." Frequent use of the term "capitalism" to describe our political economic system would suggest, heretically, that there might be an alternative system. [Pic courtesy of the amazing site of The Wanderer.]

Our culture is founded on religious freedom, as we see evidenced every day in the reality-confounding faith-based factual pronouncements of political leaders from both the Coke and Pepsi factions of our two-party system. But there really is no ideological freedom outside of the religious community. We have all the Utopias you can eat, and tolerate them with smiles—so long as they keep their fresh-baked modes of thinking and living confined to the congregation (which may be a secular variation, like the hippie communes of the 60s, or theologically science fictional but culturally successful religious movements like Mormonism). But we do not have an alternative political economy to capitalist Constitutionalism. The Federalist Papers are the real American Talmud, and there is no alternative to the seven Articles of the Founders.

American culture was extremely effective in the twentieth century in suppressing any authentic alternatives, violently excising any European-style revolutionary fervor beginning around the time of World War I. Who knew the first car bomb was a horse-drawn wagon detonated on Wall Street by an Italian-American anarchist who managed to leave a crater at the corner of Wall and Broad in protest of the imprisonment and deportation of other alienated immigrant anarchists? (See Buda's Wagon: A Brief History of the Car Bomb, by Mike Davis.) Socialist thought was appropriated by FDR to navigate the culture through the Depression, but mainly to empower the state to create the military industrial war machine born in WWII that is the core engine of 21st century American capitalism. By the end of the Clinton administration, ideological difference was largely illusory, and the end of the End of History with 9/11 really did nothing to change that. So the only place you are likely to find the world "capitalist" in the American mainstream is in a winking necktie from Forbes magazine.

This weekend, while Austin amps up the somatic consumerist revel of ACL Fest, in which our teens are taught to express the illusion of ideological diversity through their choice of bands, the folks from Adbusters are trying to occupy Wall Street. Of course, they do not have an actual ideological agenda—they want an American Tahrir movement, but they seem to barely know what they are protesting (beautifully presented but politically impotent grievances with the soul-crushing ennui of our advertising-based mental environment), let alone what the end goal is, as evidenced by their email to the multitude last night revealing that they can't even decide on their one demand. At least they're trying to break out of the haze.

What they may not perceive is the extent to which the network technologies incubated by the military-industrial complex are now bulldozing the monolithic institutions of the post-Westphalian world in a way no revolutionary cadre could ever imagine. The future is looking to be one of network-based polities and mass-customization, in which the advertising is derived from what's already in your head. These are some very real Hegelian world historical forces rolling over the political economic landscape, and we don't even yet have an "ism" to locate them in our cultural taxonomy. 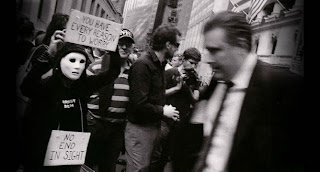 Posted by Christopher Brown at 7:22 AM

I've been mulling some ideas Paco Nathan planted in my head years back. It may seen the height of dilettante pseudo-philosophizing, but the only way I can quite express my conclusions is in Lockian terms.

If people have natural rights (life, liberty & property), they also have natural liabilities (physical, mental & spiritual frailties, ranging from social pressure to death). Corporations, under US law, have all the same rights, limited legal liability, and inherently no real natural liability. I have come to conclude Paco was dead on in his analysis of the contradiction between individualist philosophy & corporate capitalism.

I remain a libertarian, but doubt the legitimacy of corporations.

Dave— The issue of the corporate person is one I have been thinking about as well, and also one I talked with Paco about back in the day. More to come on that...