Michele Bachmann is a Mexican? 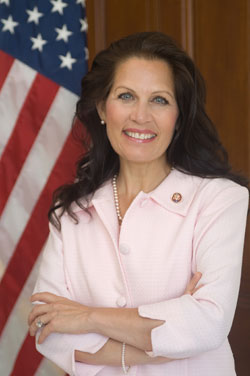 Today's Washington Post reports from the campaign trail that the people of New Hampshire, Minnesota, and other wintry climes are going totally loco about immigration, hounding the candidates at every stop for not being tough enough on the issue. And no, they are not talking about the border those states actually share, with Canada.

The piece notes how the issue is posing challenges for our Texas Gov. Rick Perry, who, like his predecessor, has a record on the issue that confounds the Midwestern xenophobes that might be drawn to his otherwise opportunistically jingoistic politics—having called the idea of a border fence "idiocy," and promoted paths for the children of "illegal immigrants" to get great public educations. It is a peculiar politico-cultural moment when Ann Coulter can complain, however coded, that Rick Perry isn't white enough.

Michele Bachmann has no such problem:

Bachmann promised to build a fence along “every mile, every yard, every foot, every inch” of the nation’s southern border, to “have the back” of enforcement agents, and to put an end to the provision of federal benefits to illegal immigrants.

But she really got her audience going with a series of lamentations about the border that places her to the right of her opponents.

“On the southern border, we are dealing with a narco-terrorist state today in Mexico,” Bachmann said. “Because 70 percent of narcotics are coming to the United States are coming from Mexico. Mexico is in a very different place right now. We are seeing criminals, felons, drugs, we’re seeing contagious diseases coming into our country. What is wrong with our government that it isn’t stopping this from coming into the nation?”

Contagious diseases? Michele Bachmann really is scarier than Sarah Palin, because she encodes a much more powerful American archetype than Palin's frontier mama who fields strips her own elk—Bachmann echoes the Mad Men-era white housewife, practitioner of hygiene as the domestic theology that distinguishes the people of the sanitized linoleum from people who get dirty.

June Cleaver was a white supremacist. And Charlton Heston is a Mexican.

Watching "Inspector Vargas" and his gringa wife Janet Leigh walk across the border in Orson Welles' long opening tracking shot from Touch of Evil, you see the essence of border angst shown, not told—anxiety about miscegenation and menace crossing freely through our trusting and essentially insecure borders, ready to explode.

Like the contagious diseases Nurse Bachmann would protect us from, the real threats represented by the idea of the southern border are invisible. As noted earlier on this blog, you can see the architecture of our anxieties clearly reflected in the research procurement program of HSARPA, the Homeland Security version of DARPA, which is trying to develop the technological components of a "virtual" border fence that sounds more like a sci-fi forcefield than a castle wall—a "barrier" comprised of speculative fields of surveillance and electronic interdiction.

An imaginary barrier, constructed with semiotics designed to sustain the belief that it exists, is the perfect way to maintain the fictions that sustain our political economy—like the idea that there really is a viable distinct sovereignty called the United States of America, rather than a networked world of blurred borders hurtling inevitably and chaotically towards new global systems, or the idea that there really is such a thing as "white people," rather than a single species of naked apes playing out in infinite permutations.

How do you sustain the idea that there is such a thing as *an American*, and *a Mexican*, and that you are supposed to be able to, you know, tell the difference? By the social construction of the idea that such a distinction exists. And the more illusory the idea of the difference is revealed to be, the more its proponents struggle to represent it with real world fortifications. The Jeffersonian tree of liberty has a mythic potency. How sad to watch the culture ramp up for a political season in which that idea of the right of revolt is appropriated to express the narcissistic frustrations of the children from Gilligan's Island—the American lumpenproles who find themselves disenfranchised by the productivity-sucking forces of global capital, subjugated into the gray collar class of The Matrix. One can only hope that the lunatic anachronisms of Bachmann's race-based demagoguery and demonization of the phantom Mexican Other will prove itself ultimately unsuccessful in a twenty-first century milieu. 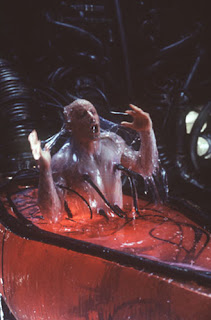 The antidote? Maybe go catch a Labor Day Weekend screening of "Saving Private Perez" (Salvando al Soldado Perez), the recent Mexican hit film satire of Saving Private Ryan, in which a narco and his band of hermanos travel to Iraq to rescue his American soldier brother from his jihadi kidnappers. That sounds a lot more like the 21st century than the Tea Party's hate-based Pleasantville. And the real contagion Michele Bachmann needs to be worried about is that her June Cleaver version of reality is under full assault when indigenous Mexican humor and perceptions of American identity start getting relayed via Hollywood into the minds of the mall rats of Wayzata.

Posted by Christopher Brown at 8:11 AM