Web-@nywhere: A look at the near future of the recent past 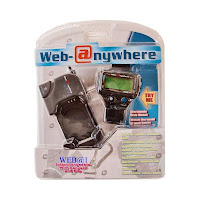 About a month ago, a coworker bought a number of archaic digital watches for everyone in the office. He found them in the bargain bin of a thrift store in Waxahachie, and since they cost about a buck each, he thought they would be a fun gag gift. With replacement batteries I ordered online for $1.50 each, we managed to get the watches working again. 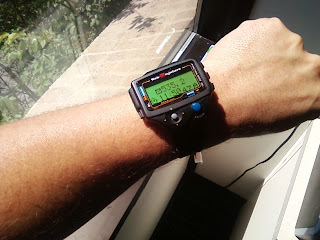 But these are no ordinary wrist-watches. These are Web-@nywhere personal computation devices, a conceptual waypoint between the calculator watch of the 80s and the first smart phones of the mid-noughts. It has an LCD graphic display with a resolution of literally dozens of pixels, but its big selling point is the ability to surf the web. It interfaces with a PC through the serial port and a bulky proprietary clasp that fits around the entire watch. With the help of an installation diskette (compatible with Windows 95/98), you can establish a data link with your PC, and then browse the web from the two-inch display on your wrist.
Like most modern consumers of the internet, you are probably thinking to yourself right now: "Why would I browse the web on my watch, if it's already connected to my PC?" But for the consumer of the turn of the millenium, this was the first foray into an exciting new realm of mobile computing.
Archeological web searching uncovers tantalizing hints about the history of this gadget. The original website for the Web-@nywhere company is long abandoned, the domain snatched up and re-cycled as a trashy SEO spam blog (the ultimate fate of all web properties who don't have owners who love them). But there are still third-party references to the product, disused auction listings and dusty forum posts, which we can piece together to form a narrative of a product that burst onto the scene and then faded away. 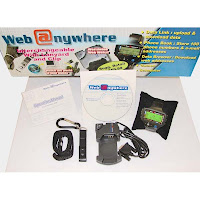 We first see mention of the Web-@nywhere watch in early 2001. America is still reeling from the bursting tech bubble and the realization that an illiterate buffoon has cheated his way into the White House. We are a nation that is newly cynical of the future. We want our gadgets and our "information superhighway," but we want them wrapped in the vestiments of a more familiar era. On March 9, 2001, the Web-@nywhere earns a brief but gushy mention on the Entertainment Weekly website. The retail price is $85, which in turn of the millenium dollars could pay for a household's restaurant budget for two months or more. It appears to have been listed in the SkyMall catalog, along with other seemingly-advanced yet useless gadgets like the spider-vacuum and the inflatable car passenger. In 2002 a verbose review of the Web-@nywhere by a consumer highlights its many design and software flaws, and admits that the core design feature of the watch, the ability to download 128k of text-only web content for later reading, is not terribly useful.
By the end of 2002, the cost of the Web-@nywhere has collapsed to $55, and then $20. By 2003 the first smartphone Blackberries take to the market and the Web-@nywhere disappears from the digital record like the Anasazi.
The consumer of 2001 must have been dazzled by the Web-@nywhere's technological promise. The front face is dominated by two main interface features. One is a four-directional rubber knob reminiscent of a joystick or early laptop control nubs. The other is a large button that functions a little like an enter key and a little like a left-click button.
The buttons along the sides of the watch are design holdovers from the age of digital wrist watches.The buttons on the right are mainly selectors. By pressing them repeatedly you scroll through lists of features and menu options. The interface is neither intuitive nor efficient. In the coming years, improved GUIs will make watch-style buttons like these redundant.
The most fascinating anachronism on the watch is the button on the lower left side. It wasn't until I had actually pressed the "backlight" button, and admired its under-stated green glow, that I realized I hadn't seen a backlight button in a very long time. In our modern age, although we still employ LCD interfaces in our mobile devices, their design aspects are much different than the late-twentieth-century watch backlight. We don't have a dedicated button for backlights because a color LCD screen is essentially invisible unless lit. Any attempt to interface with the modern mobile device will trigger a luminescence to rival the flashlights of my childhood. The power for this light comes from the fantastic improvements in lithium ion batteries we've seen in the last decade. The batteries power a long-range microwave transmitter, so there's more than enough juice to spare for mere display purposes. The poor Web-@nywhere watch has only a modest 3-volt power source, what popular vernacular had once designated a "watch battery." However, the Web-@nywhere display has one advantage over most modern devices in that it's perfectly readable in normal light and only needs a backlight when in a darkened room.


Sadly, the Web-@nywhere serial port connector and the proprietary software are lost to time. We may never know what games could be downloaded into the 128k memory. We will never have the joy of reading text-only web content from a two-inch screen. Nor will we be able to store our contacts and phone numbers on our wrist.
The only functioning taste of 2001's future is a series of pre-programmed animations, and the option to change our local time to Paris. 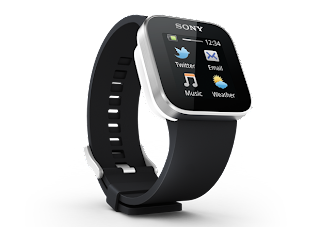 I wanted to end this article with the declaration: The Web-@nywhere is the last holdover from the Dick Tracy vision of the future. How do you make a gadget more hightech and convenient? You mount it on your wrist of course.
But then I found out this morning that Sony is releasing a "smart watch." Like the Web-@nwhere it does not have its own internet connection, but has to be tethered to a device that does, like your smartphone, which almost certainly has a much larger and more convenient interface.
So in ten years, are we going to be looking back at the Sony SmartWatch and marveling at its weirdly useless design concept?
Yep.