You sunk my littoral combat trimaran! 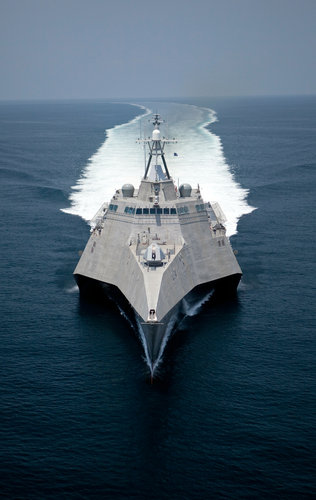 The front page of this morning's New York Times has a stroke piece about the Navy's new combat vessels that reads like a page from the technical manual of Gerry Anderson's Thunderbirds!. It even includes a cross section in the style of a Silver Age comic, with a sidebar explaining how different modules can be installed onboard for different missions. Sure, the story goes through the motions of presenting some kernels of serious political analysis, noting the debate about how many $700 million littoral interceptors we might really need, and the annoying questions about whether the things actually do what they are supposed to. But the lead paragraph is pretty clear where the Times comes down—on the side of: Dude, that is fucking cool!

"The Navy’s newest ship is designed to battle Iranian attack boats, clear mines from the Strait of Hormuz, chase down Somali pirates and keep watch on China’s warships. The ones built here even look menacing, like Darth Vader on the sea."

No wonder, as the story makes clear, both the President and his Republican buddy Jo Bonner from Mobile want more. They are so cool we are going to name one after Gaby Giffords! Because, you know, it will represent the spirit of frontier vengeance against tyrants...

Do you suppose it's a coincidence that this story appears at the same time as the military-entertainment complex launches its marketing campaign for Battleship—a movie based on the Milton-Bradley boys war game, brought to you by the post-9/11 joint venture of Hasbro, Universal Studios, and the United States Navy? Starring Taylor Kitsch as the prodigal SEAL, Liam Neeson as stone-faced Admiral Shane, and introducing Rihanna as the Esther Williams of deck gunners, the movie appears to be a brainless summer live action video game devoted to the semiotic fetishization of deep sea techno-leviathans. General Dynamics has the best product placement, and they don't even have to pay for it.

You know the globalist masterminds are behind this youthful propaganda when you see that the film features a Tora! Tora! Tora!'s worth of subtitled multinational naval officers united under a single command—blue helmets versus aliens who want to steal our oil! Bring the boys home, and instead get back to projecting our power with video game consoles attached to gigantic naval robots. The only people we'll kill with Rihanna's deck guns are alien others, and you can't even see them on the screen. How much do you want to bet Barry Obama played the game as a kid in Hawaii, after seeing it during commercial breaks of Voyage to the Bottom of the Sea?

"A tour at the Mobile yard of a ship that is nearly complete, the Coronado, shows a bridge with consoles of video screens that allow the captain to drive with a joystick or from a laptop. The 400-foot ships can go faster than 40 knots, or nearly 50 miles an hour (the ones built in Mobile have aluminum trimaran hulls — creating less drag in the water and more speed), and are able to operate in 20 feet of water. They have relatively small crews of 75, decks for helicopters and a variety of equipment modules that can be swapped for different missions, like mine-hunting, submarine warfare or special operations."

You can't help but wonder the extent to which our 21st century geopolitics is influenced by the science fictional imaginations of a whole bunch of inner 11-year-olds with good lobbyists (and better publicists).

Is it too obscenely heretical to suggest the deep psychology of our escalating drone wars, of the ultimate Virilian combat system that replaces The Right Stuff with the stuff of first person shooters, is more Jared Loughner than U.S.S. Gaby Giffords?

Two points. First, I'm totally guilty of joining in the futuristic corvette-class warship gee-whiz fanclub, and I have the military-SF publication to prove it:
http://apodispublishing.com/fusion/pages/17_gyre.htm

Second, there are currently no battleships in service anywhere on the planet. They were all replaced by the aircraft carrier and destroyer escort modality. So every time I see the Battleship trailer I cringe. Might as well make a movie where we fight Saddam with battle-locomotives.

To be fair, the last battleships were retired because of operational costs rather than lack of use. The Iowa Class battleships that participated in the original Desert Storm and combat patrols off the coast of Lebanon were extremely effective in demolishing shoreline defenses and launching absurd numbers of Tomahawk cruise missiles at inland targets. Their WWII era armor also made them practically invulnerable to Exocet and Silkworm missiles that posed such a threat to smaller ships. That said, operational costs ultimately won out over such narrow mission specs.

To be perfectly clear, I also cringe when I see the Battleship trailer. I mean, I've gone through it frame-by-frame and see absolutely no indication they've got a cake large enough to fit Erika Eleniak anywhere...

Coming soon! info on the return of the big gun ship .... see Rail Gun - more bang for the buck than any carrier in the close fight!