The Day the Narrative Died 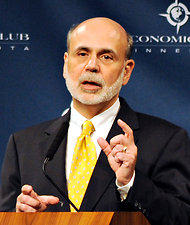 On the front page of this morning's business section, cranky Bernanke (one wonders what he's measuring between thumb and forefinger in that photo) has a message for American consumers: lighten the f up!

WASHINGTON — Ben S. Bernanke, the Federal Reserve chairman, offered a new twist on a familiar subject Thursday, revisiting the question of why growth continues to fall short of hopes and expectations.

Mr. Bernanke, speaking at a luncheon in Minneapolis, offered the standard explanations, including the absence of home construction and the deep and lingering pain inflicted by financial crises. He warned again that reductions in government spending amount to reductions in short-term growth.

Then he said something new: Consumers are depressed beyond reason or expectation.

Oh, sure, there are reasons to be depressed, and the Fed chairman rattled them off: “The persistently high level of unemployment, slow gains in wages for those who remain employed, falling house prices, and debt burdens that remain high.”

However, Mr. Bernanke continued, “Even taking into account the many financial pressures that they face, households seem exceptionally cautious.”

Consumers, in other words, are behaving as if the economy is even worse than it actually is. 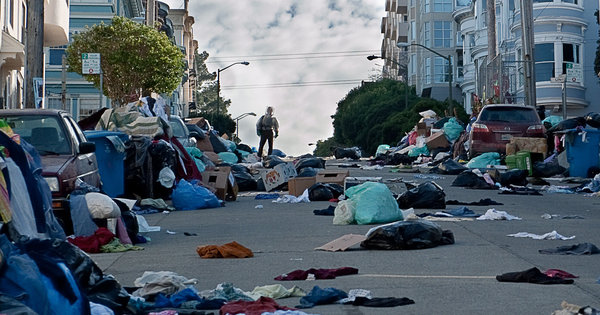 Who can blame them? The psychology of the American Zeitgeist has been shattered by the failure of all of our national narratives. No wonder the hot new movie out this weekend is Steven Soderbergh's appropriation of the paranoid 70s don't trust the Man thriller, updated for the Tea Party age. Bernanke's mystifying multitude can see what he perhaps cannot: that the inability of the plotline of the nation to reel out in accordance with the oft-repeated master plan signals changes far more profound than we can really yet fathom.

Consider what those consumers have witnessed in the past decade:

- The crushing destruction of the blissful utopian prosperity (at least for the class of Americans Bernanke is talking about—the ones who spent extra money on stuff they don't need) of the technology-induced Long Boom, and the end of the End of History.

- A presidential election that no one won, until the power factory made up a reason to break the statistical tie. Between two candidates, it should be noted, who were members of the (un)American aristocracy: politicians who are electable because they inherited the title.

- A Charlton Heston and George Kennedy disaster movie scenario played out with a reality Orson Welles could never imagine on the Tuesday morning news, complete with exploding skyscrapers and heroic men in uniform, in which the basic everyday technologies of our commercial lives were employed by medieval necromancers hiding in caves in exotic locations to begin the destruction of our meta-narrative. The new era was ushered in by investment bankers learning to fly.

- A framing of the response to this event with the all-American Western movie paradigm of hunting down the bad guy. This narrative played out perfectly for the first three months, with grainy telephoto images of ass-kicking Grizzly Adams Special Forces dudes outfitted with the Full Metal Apache version of the Outside Magazine gear of year catalog, riding horseback with the good Indians across the Afghan plain. We had the big denouement on the snowy approach to the Blofeld hideaway of the bad guy (see below). And then? Ten years without an ending.

[Matt Bors gets it dead-on pretty much every time.]

- Instead of the tidy ending that would end the movie with the cowboy riding off into the sunset, we got Apocalypse Forever. A decade of grim governance through geopolitical fear, personified by the cyborg Veep, and all the well-mannered lawyers clinically constructing extra-Constitutional space where no one can hear you scream. You had to work hard to find the real images of the pain that our war machine unleashed on the globe, but you could see it seeping out all over the pop cultural glaze of our ubiquitous screens, as dissected in our 2007 post on "The Warporn Eucharist."

[For an unhealthy survey of the GWOT Zeitgeist, check out these morale patches at MilSpecMonkey: "Pork Easting Crusader"? "What Would Jesus Shoot?" "What Would Jack Bauer Do?" (via Bruce "Gothic High Tech" Sterling)]

- And let's not forget about the unsolved mystery of the anthrax in the mail.

- Because the Taliban Toyota cowboy movie lost reel wasn't enough, we repeated pretty much the same paradigm in Iraq, as neocon War College scenarios turned out to be a lot bloodier, and resistant to definitive ends, when they were in the real world.

- In The Big Uneasy, the disaster movie paradigm really failed, as the guys with the ladders and the helicopters and the megaphones managed only to watch a complete Hobbesian meltdown that exposed all of the unhealed cultural lesions of American race and class. (Yes, they did just convict those cops for wrongfully shooting the people on the bridge.)

- The beginning of the end of privacy, in which all secrets—corporate, government, and personal—are live on the network, ushering in a panopticon society in which we are all conducting surveillance on each other all the time.

- A diminishing of the relevance of the sovereign nation state, revealed in the insecure efforts to reinforce its very existence with the fantasy of border walls, the inability of governments large and small to service their own debt, and the dubious viability of governance by a monolithic "sovereign" in a world that is really run by networks.

- The diminishing viability of the long-term employment contract, a destabilizing force that is probably one of the main cultural factors behind the Tea Party movement—networked Capital's transformation of the American middle class into a mass of disenfranchised grey collar lumpenproles.

- A global economic meltdown far worse than the bubble burst that began the decade, one where you can see the raw fear in the confounded eyes of the Masters of the Universe, as scenarios play out that violate the Talmudic laws of neoclassical economics, crisis scenarios only Karl Marx could have imagined. The American narrative really doesn't work when you take away the theme at the heart of it all: growth.

What Bernanke's really complaining about? Americans got the message of the past decade, and they don't believe the movie anymore. They no longer buy into the basic narrative that growth should be generated by borrowing against future income. It's the Great Deleveraging. Is that really such a bad narrative to abandon? Wasn't Rocky Balboa a lot more likable when he stopped working for the payday lenders?

It is no accident that this decade in which our narratives failed us began with the confluence of the *real* end of the long war of the twentieth century, and the dissemination of networked computing into every fabric of society. The network is the common thread in the mass destabilization of the past decade, the tool that is disassembling the reality we inherited.

What did we really lose in the past decade? The Future. Our narratives failed because network culture does not tolerate the orderly linearity of "narratives."

The end of the Future doesn't mean The End. It means an anarchist's dream of liberated territory, waiting to be explored, spelunked, and recreated in the image of the emerging world. It won't be easy, but it will definitely be interesting, and it should be fun. And you can bet that it won't have a lot to do with Ben Bernanke. 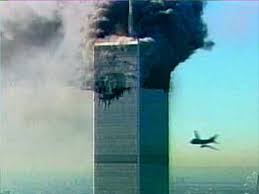 I've been reading a lot of Americana lately (the last year or so), early wars of the republic, settlement west of the Alleghenies, Texana, that sort of thing.

I think you are right about the narrative. Early Americans had even greater shocks, collapse of royal authority, Reconstruction, bloodshed between labor & capitol, etc.

Yet American society always seems to come out the same, they've got their kinfolk, their race, God & country. Then something happened about 90 years ago. Maybe it was just the shift from rural to urban, but suddenly people could start asking questions about gender roles, races, patriotism, religion & family. The process accelerates from the Depression through WWII into the social upheaval of the '60s. So much of modern culture seems to be a reaction to established attitudes & the challenge raised to the status quo on ultra-fundamental levels.

Not that the process was bad, even if you could, who wants to go back to 19th century attitudes.

But maybe the price of breaking down that 19th century (or is 18th? or older?) worldview is surrendering the certainty it had.

Dave—I think you are right about a shift in the twentieth century. And I think it can be traced to World War II, and the subjugation of the conventional American personal/national narrative to something much more imperial—the appropriation of the frontier narrative to serve the maintenance and extension of the global hegemony of a newly empowered nation state. Specifically, its military-industrial (and military-entertainment) complex. Conan as puppet sponsor of Aquilonia?

Conan vs the Antediluvian Arbenz administration? If it had been some Hyborian banana republic, it would have been ho-hum. Practically another day at the office for Thulsa Doom & the United Fruit Company. REH's genius was to turn it up to 11 and put the revolt at the heart of empire.

Conan owes a bit to William Walker I think, the "king by his own hand" element anyway. Alex Cox is about the only pop-culture saboteur to take Walker seriously. Walker & his filibustering antics are quaint, yet so up to date. Regime change has been with us since before the seas drank Atlantis.

WWII looms large. It's practically the story of my family. My parents grew up in rural surroundings. They left the farm to serve in the military in WWII. After that the military was their principal employer for decades.

20th century Americana is strange stuff. One decade's science fiction is the next decade's daily life.

BTW Chris, it's posts like this that make me love reading NFotF. Brief, to the point, and with enough subversive food-for-thought to stock an underground bunker for a decade.