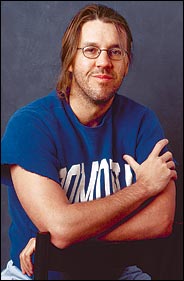 The ultimate refutation of irony? How very fucking sad.

CLAREMONT, Calif. (AP) -- David Foster Wallace, the author best known for his 1996 novel ''Infinite Jest,'' was found dead in his home, according to police. He was 46.

Wallace's wife found her husband had hanged himself when she returned home about 9:30 p.m. Friday, said Jackie Morales, a records clerk with the Claremont Police Department.

Wallace taught creative writing and English at nearby Pomona College.

''He cared deeply for his students and transformed the lives of many young people,'' said Dean Gary Kates. ''It's a great loss to our teaching faculty.''

Wallace's first novel, ''The Broom of the System,'' gained national attention in 1987 for its ambition and offbeat humor. The New York Times said the 24-year-old author ''attempts to give us a portrait, through a combination of Joycean word games, literary parody and zany picaresque adventure, of a contemporary America run amok.''

Published in 1996, ''Infinite Jest'' cemented Wallace's reputation as a major American literary figure. The 1,000-plus-page tome, praised for its complexity and dark wit, topped many best-of lists. Time Magazine named ''Infinite Jest'' in its issue of the ''100 Best English-language Novels from 1923 to 2005.''

Wallace received a ''genius grant'' from the MacArthur Foundation in 1997.

In 2002, Wallace was hired to teach at Pomona in a tenured English Department position endowed by Roy E. Disney. Kates said when the school began searching for the ideal candidate, Wallace was the first person considered.

''The committee said, 'we need a person like David Foster Wallace.' They said that in the abstract,'' Kates said. ''When he was approached and accepted, they were heads over heels. He was really the ideal person for the position.''

Wallace's short fiction was published in Esquire, GQ, Harper's, The New Yorker and the Paris Review. Collections of his short stories were published as ''Girl With Curious Hair'' and ''Brief Interviews With Hideous Men.''

He wrote nonfiction for several publications, including an essay on the U.S. Open for Tennis magazine and a profile of the director David Lynch for Premiere.

Born in Ithaca, N.Y., Wallace attended Amherst College and the University of Arizona.


"Everything is Green, from Girl With Curious Hair, republished in Harper's, September 1989

Q: Are you trying to find similar meanings in the pop culture material you use? That sort of thing can be seen as merely clever, or shallow.

A: I've always thought of myself as a realist. I can remember fighting with my professors about it in grad school. The world that I live in consists of 250 advertisements a day and any number of unbelievably entertaining options, most of which are subsidized by corporations that want to sell me things. The whole way that the world acts on my nerve endings is bound up with stuff that the guys with leather patches on their elbows would consider pop or trivial or ephemeral. I use a fair amount of pop stuff in my fiction, but what I mean by it is nothing different than what other people mean in writing about trees and parks and having to walk to the river to get water a 100 years ago. It's just the texture of the world I live in.
Posted by Christopher Brown at 10:53 PM