The Color Purple (as rendered in black newspaper ink)

In Sunday's installment of The Phantom (which for decades preserved the old school tradition of separate, and sometimes conflicting, daily and Sunday storylines — the only thing better than a never-ending non-sequitur narrative that has been running since 1934 is *two* parallel versions featuring the same character, you know, the kind of thing that caused DC comics to kill off a bunch of characters just to try to tidy it up a little bit), a newly introduced character poses a question one of the Phantom's Bandar pygmy deputies should have asked a long time ago: Note the Ghost Who Walks' Man Friday Guran leering at the interloper from the lower left hand corner of the above panel. Move in for a close-up. Wouldn't you be wearing a similarly self-loathing face if you had been living out your "existence" for 70-some years drawn as a chubby pygmy with a lampshade on his head, serving the arrogant whims of a white man in purple tights, gun belt and a bunch of giant skull bling? Not much of a surprise when you learn that part of the current Phantom's backstory was his youthful education in Mississippi. To which you might say, hey, just be glad you're not one of the Phantom's vintage female characters, like these sisters trapped by African cannibals and then by Arab slavers in a vintage Sunday storyline that has been going on since sometime this past spring. (One wonders if Falk, famous for his repeated use of a secret band of female air pirates who like to lounge in 1930s bikinis on their private atoll, hung out with Wonder Woman creator William Marston, who spent his life as the apex of a polyamorous triangle.)

What a weird experience to continue to wander through the technicolor pulp pre-WWII imagination of the Phantom's creator, Lee Falk, a kid from St. Louis who changed his own surname and concocted his own elaborate personal mythology when setting out to make his mark as a comics pro, styling himself as a world traveler who had studied with Eastern mystics when the farthest he'd been was Illinois. A bold lesson in inventing your own reality, and making the juvenile imaginary into a tangible simulation of the Real:

Falk died of heart failure in 1999. He lived the last years of his life in New York, in an apartment with a panoramic view of the New York skyline and Central Park; he spent his summers in a house on Cape Cod. He literally wrote his comic strips from 1934 to the last days of his life, when in hospital he tore off his oxygen mask to dictate his stories. However, his two characters, Mandrake and, in particular, The Phantom, are still active and popular, both in comic books (the newest addition to the Phantom coming from Moonstone Books) and comic strips.

Meanwhile, in the 21st century update of Upper Manhattan racial attitudes for the age of Obama department, the Sunday Times' glossy magazine cover story by one of its star journalists about her own experience hiring a surrogate to gestate her child features this astonishing photo of the reporter, her baby, and the baby's "nurse" (standing before some Hudson Valley miniature simulation of an antebellum plantation, I guess)... 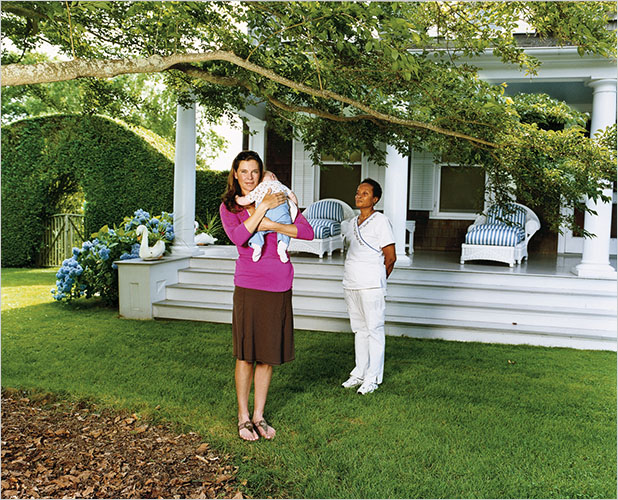 ...and if you flip the page, a photo of the barefoot working class surrogate that carried the reporter's child to term, lounging on her Appalachian porch: 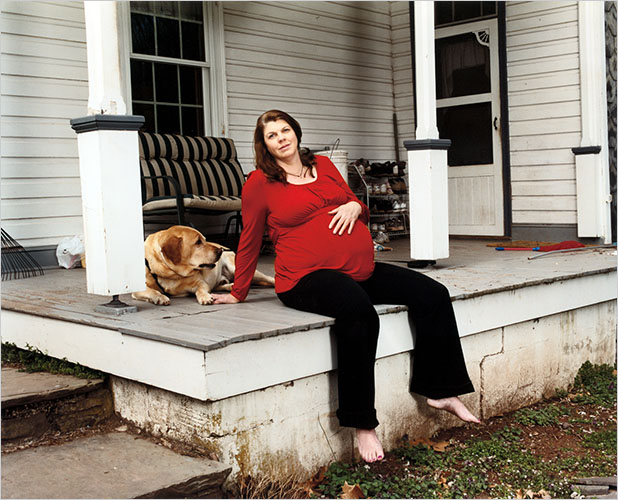 The Phantom's pygmy personal assistants will be glad to see that the surrogate was allowed to keep her bow and arrow* with her on the porch.

According to the story, the gestational surrogate was located through a lawyer who places ads on diner placemats, total price $30,000-$60,000 (legal fees included, medical expenses not included).

And you thought The Handmaid's Tale was a dystopian fiction designed to prevent such a future from occurring. The difference is, the real-world variation is much more benevolent, governance by The New Mandarins of the Baby Boom, whose exercise of class and race power is okay because they are so rational and loving. And with such outstanding academic pedigrees.

Institutionally self-revelatory media pieces like these (the memoir pieces by big-time journalists are always a tell) provide rich subtextual insight into the old currents stirring beneath the utopian veneer of the current politico-cultural climate. Does the President-Elect realize that the portion of his constituency that's writing all the biggest checks love him the way they loved David Hampton? (You know, he goes to Harvard with the kids' friends, his father is Sidney Poitier?) That the 21st century remix of The Manchurian Candidate is not the Denzel Washington post-cyberpunk version, but rather a cathode ray stadium rally remake of Six Degrees of Separation for the consuming masses? Roll over, Richard Condon, tell George Orwell the news.

Can we arrange for the smart-assed gang kid from the Phantom's section of the comics page to wander uninvited into the Sunday Times Magazine? And when he's done there, spray some graffiti on the walls of the editorial page? Please? Maybe Huey**?

*Darn, inspection of the larger image in the print version reveals that the object in the lower-right-hand corner of the picture is not a toy bow and arrow, but a Swifter duster and a piece a pipe. Oh, well, I think the comparison of the photos still speaks for itself. Do the editors not realize what they are saying about themselves with this piece?

**Ten-year old radical from erstwhile daily strip (and now Adult Swim cartoon) Boondocks, who was frequently evicted from the comics page for being too uppity.
Posted by Christopher Brown at 7:02 AM