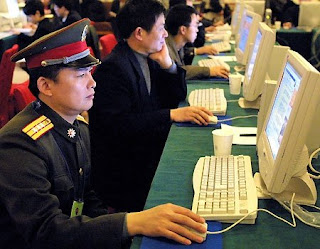 Prof. Nevin's upcoming paper on the deployment of post-Pentecostal Strategic Level Spiritual Warfare is well-timed, announced the same day as the Secret Service and the FBI revealed that they spent a large chunk of the summer fighting off foreign intelligence hacks of the internal computer systems of both major presidential campaigns. ArtVoice synthesizes:

Over the summer, the FBI had its hands full with simultaneous cyber crime investigations: the hacking of the Obama campaign computer system(s), and the hacking of the McCain campaign computer system(s). While the intrusions have been acknowledged, little else has been released or confirmed yet. At this point, it’s known for sure that the FBI was involved, that “a large number of files” were stolen from the Obama side, and that the attacks came from a “foreign entity” and definitely did not come from the opposing sides. The McCain campaign systems were intruded on in a similar fashion as the Obama systems, but the extent of the compromise on their side was unmentioned. The rest is speculation of course: security experts have suggested the attacks likely came from China or Russia, and anyone’s best guess is that the goal of such an intrusion was to gain an inside line on procedures and policies used by the campaigns for a leg up in future dealings with the to-be president.

This followed a report earlier in the week about successful hacks of the White House systems. From the Financial Times:

Chinese hackers have penetrated the White House computer network on multiple occasions, and obtained e-mails between government officials, a senior US official told the FT.

The cyber attackers managed to penetrate the White House system for brief periods that allowed them to steal information before US government experts each time patched the system.

US government cyber experts suspect the attacks were sponsored by the Chinese government, although they cannot say for definite.

“We are getting very targeted Chinese attacks so its stretches credulity that these are not directed by government-related organisations,” said the official.

The National Cyber Investigative Joint Task Force, a unit established in 2007 to tackle security, detected the attacks. The official stressed the hackers had accessed only the unclassified computer network, and not the more secure classified network.

“For a short period of time, they successfully breach a wall, and then you rebuild the wall . . . it is not as if they have continued access,” said the official. “It is constant cat and mouse on this stuff.” 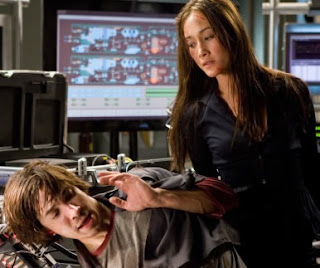 Fortunately, it was also announced on election day that Jack Bauer will still be around to locate, detain and torture any Chinese hackers found infiltrating the White House of President Palmer, I mean Obama.

Not sure, though, what Jack and the rest of the California windbreaker warriors of CTU will do with the opportunistic wave of Obama-McCain spam. From NZ IT Brief:

Cyber crims have wasted no time in attempting to capitalise on world events with IT security and control firm Sophos warning about a new spam campaign that claims Barack Obama and John McCain have died.

Dude, who wouldn't click on the Cindy McCain video link? No doubt like a cross between Ilsa She-Wolf of the SS and Chuck Norris' Missing in Action.

I anxiously await the arrival of her avatar in my in-box, dancing like some kind of warporn variation of the Leela virus from the opening of Hari Kunzru's brilliant Transmission:

It was a simple message.

Hi. I saw this and thought of you.

Maybe you got a copy in your in-box, sent from an address you didn’t recognize; an innocuous two-line e-mail with an attachment.

Maybe you obeyed the instruction to

and there she was; Leela Zahir, dancing in jerky QuickTime in a pop-up window on your screen. Even at that size you could see she was beautiful, this little pixelated dancer, smiling as the subject line promised, a radiant twenty-one-year-old smile

That smile. The start of all your problems.

But there were others. How many did she infect? Thousands? Tens, hundreds of thousands? Impossible to count. Experts have estimated her damage to global business at almost $50 billion, mostly in human and machine downtime, but financial calculation doesn’t capture the chaos of those days. During Leela’s brief period of misrule, normality was completely overturned. Lines of idle brokers chewed their nails in front of frozen screens. Network nodes winked out of existence like so many extinguished stars. For a few weeks she danced her way around the world, and disaster, like an overweight suburbanite in front of a workout video, followed every step.

Of course the whole thing made her famous, beyond even her mother’s wildest imaginings. Leela was already a rising star, India’s new dream girl, shinning up the greasy lingam of the Mumbai film world like the child in the conjurer’s rope trick. But while Leela’s mother had thought through most eventualities, she hadn’t factored the march of technology into her daughter’s career plan. Mrs. Zahir was decidedly not a technical person.

And so Leela found herself bewitched, the girl with the red shoes, cursed to dance on until her feet bled or the screen froze in messy blooms of ASCII text. Yet despite what her mother may have thought, she was a surface effect. The real action was taking place in the guts of the code: a cascade of operations, of iterations and deletions, an invisible contagion of ones and zeroes. Leela played holi, and her clinging sari diverted attention from the machinery at work under her skin.

A chain of cause and effect? Nothing so simple in Leela’s summer. It was a time of topological curiosities, loops and knots, never-ending strips of action and inside-out bottles of reaction so thoroughly confused that identifying a point of origin becomes almost impossible.

A cinema crowd watches a tear roll down a giant face.