When Mom went into Assisted Living, she gave me her car—a 2006 Chevrolet Impala, silver with leather seats. It was not the right car for me. But still a rather nice car. Odd, how catastrophe brings markedly mixed outcomes. Mom getting Alzheimer's was catastrophic for both of us. Yet the dark clouds turned out to have, if not sterling silver linings, at least glints of silver in the gloom.

The Alzheimer's has knocked out some of Mom's brain circuits. That's why she had to stop living alone. On the other hand, some of the affected circuitry seemed to control neurotic inhibitions, and maybe even self-absorption. In the past three years my mother has expressed more appreciation for my character, capability, and career than she expressed in the previous three decades. Then there was the end of our last phone call, a couple of days ago. She said, "Good night, Honey." Normal, right? Well, the norm for thirty years was an emotionally neutral, tentative signoff more appropriate for concluding a chat with a near stranger: "Good night...?" I treasure that unexpected, nice, normal "Good night, Honey."

And there's the silver Impala. It came in handy when I returned to Houston from Columbus, Georgia with most of what I inherited from Mom's house. The Impala effortlessly hauled a huge trove of childhood stuff plus heirlooms including furniture.

Six weeks later, I took the Impala on a 4,000-mile road trip out West, from Houston to Oklahoma then Colorado. For part of the trip I had a co-pilot. The car absorbed her luggage and mine and my plentiful emergency supplies with room to spare. One afternoon in Denver, I emptied out the car in order to transport pretty much all of the supplies for a publisher's party—Pyr's Brazil-themed bash at the World Science Fiction Convention, orchestrated by editor Lou Anders. Lou needed wheels to schlep the supplies to the party hotel. Enter the Impala. Into the Impala went lots of bottles of Brazilian booze, a hundred limes and other groceries, enough plastic cups and plates for a horde of partygoers, and several large boxes of Pyr-logo souvenir glasses shipped from New York. Booze and all was safely delivered to the party hotel in the capacious car previously belonging to my mother, the teetotaling Southern Baptist. After WorldCon my copilot and I drove on to Salt Lake City. When we unloaded our luggage, I found a lime skulking in the Impala's vast trunk. A couple of days later I took a long day trip out into the Uinta Basin, east of Salt Lake City, to do some novel research. Finally I returned to Texas via scenic routes in Utah and New Mexico. I had a safe, cool and comfortable ride day and night, rain and shine.

No way could I have made a trip like that in my 1996 Toyota Celica. And it was high time for me to move up to a more spacious car with newer safety features, even though I loved the Celi dearly. She was a sweet, fun-driving automobile that I named Sierra Tango—as in Celica ST, as distinct from the more souped-up but mechanically iffier Celica GT. At the tail end of September, I drove the Celica back to Georgia to handle more of my Mom's finances, and to sell the Celi to my third cousin.

That left me owning one car. The Impala. Unfortunately it still wasn't the right car for me. On top of that, with the potential failure of General Motors splashed all over the news, this did not seem like a good time to hang onto a GM car for too long. Much less a GM car purchased from and still under warranty from Bill Heard Chevrolet, which spectacularly went bankrupt just before I returned to Columbus in the Celica. Columbus was buzzing about it, since Bill Heard originated in Columbus and had rated as one of the top local points of entrepreneurial pride.

Returning to Houston via AirTran, I soon went shopping at the CarMax on the Gulf Freeway. After pleasant dealings with CarMax, including asking for delivery of a car from Austin because it was just the make, model and color I wanted, I bought that car. It's a 2005 Honda Accord. Yes, I dropped back a year—but despite being one year older than the Impala, the Accord drives much more nimbly and has fewer rattles. There are reasons why GM is not in the best of corporate shape. In any event, if you ask around for reliable, highly safe cars that have great fit and finish inside and hold value against depreciation, the brand names Toyota and Honda inevitably enter the conversation. Most other auto brand names exit stage right.

CarMax gave me a good trade-in price for the Impala. I'm sure its new owner will drive away happy. I certainly did. The Accord is exactly the right car for me. It's an elegantly styled coupe with an understated spoiler and a moon roof and it's the most wonderful, sparkle-saturated shade of blue. The sparkles in the high-tech paint reflect sunlight to keep the car cool. The interior is dark gray with leather and chrome accents. And there are more better storage arrangements than any car I've ever seen. These include a special little compartment above the rear view mirror for sunglasses; a lidded niche under the instrument panel for I don't know what, but I'm using it for tiny souvenirs of my travels with the Impala; and under the CD changer there is a compartment specifically sized for a stack of CD's. That's perfect, since I check out numerous CD's from the music collection at the Rice University Library.

I named my new car Victor Six. For one thing, it has a V-6 engine. For another thing, that's a way to declare victory over two years of problems. There was my mother's Alzheimer's with so many problematic repercussions. There was my first published novel being released into a bad time for the publishing industry and for science fiction sales. Hurricane Ike blew through Houston, and every place it didn't wreck outright it laded with negative energy. Now Hurricane Bad Economy is churning across the U.S. and world. None of these problems are over and done with. It's a good time to declare victory anyway. Victory can be at least as much frame of mind as fact on the ground. 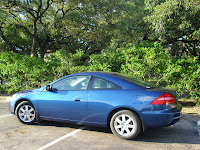