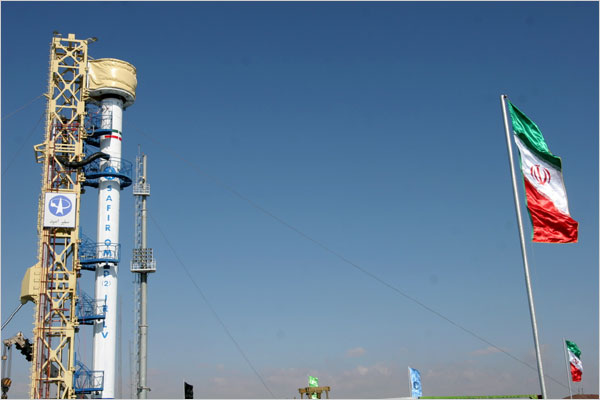 Blocked on coming up with scenarios for that near-future postcyberpunk space opera you've been wanting to work on? Well, Mahmoud Ahmadinejad has you covered, with the launching of the first Iranian satellite yesterday from an undisclosed location in the secret heart of Persia. Take your 300 Spartans (last stand of the valiant Westerners against invading Persians, with extreme body-piercing)...

Borrow some tricks from Ken Follett's On Wings of Eagles (the true story of Ross Perot recruiting ex-military guys to rescue a bunch of EDS employees trapped in revolutionary Tehran)...

Put them all on some kind of Sinbad-remixed Freeside (the degenerate space station home of the Teshier-Ashpool clan and the Wintermute AI from Neuromancer)...


And see what happens.

Am I going to have to pull your c-word license? The orbital station is Freeside ... Wintermute's one of the AIs. This comment brought to you by the year 1985.

Thank you for recalling Ross Perot's hostage rescue of EDS employees in 1979. However, a correction is in order. All of the rescuers, with the exception of Arthur "Bull" Simons, were EDS employees with military backgrounds. They were not paid for undertaking the mission; they volunteered. Colonel Simons was not paid. When the team arrived at DFW Airport and reunited with their families, Colonel Simons turned to Ross and said, "I just got paid."

Inspired by Mel Brooks' History of the World Part I...
Ayatollahs
In space!
We're flyin' along
Protectin' the Persian race!
Rockets
From EEEE-ran!
Powered by
Holy KEEEEE-ran!

OK, I admit that was in bad taste, but I can't resist a musical.

Thanks to all for the corrections (and Dave for the, uh, show tune). All has been corrected...

And Richard, we could use more corrections from the year 1985. Do you maintain a direct channel?