When I was a kid, there was a period when I really wanted to get a pet monkey. My parents resisted, so I did a lot of research on the subject and made a series of compelling arguments as to how it could work. They still resisted, and in the end I was placated with a new dog.

I think the idea may have been subtly inspired by my viewing of a matinee showing of The Golden Voyage of Sinbad, in which a ship-borne necromancer creates his own homunculus, a groovy little Harryhausen gargoyle that carries the film. The monkey as pet is the ultimate anthropomorphic self-indulgence, a highly intelligent mini-human complete with opposable thumbs, an action figure with a beating heart, a cartoon mirror that enables a peculiarly eccentric and authentic simulation of whimsical self-expression. 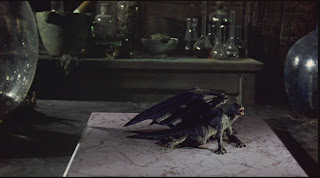 I remember reading, many years later, a putatively "straight" biography of Michael Jackson, who at the time I considered an iconic postmodern figure who occupied some weird nexus of the '60s Motown pop star and David Bowie as the raceless and sexless alien Man Who Fell to Earth (for more on that strange theme, see my story "Immaculate Perception" in the hard-to-find Argosy 3, the last issue of that venture edited by Lou Anders before he moved on to bigger and better things at Pyr). Among the most compelling scenes in that bio was the image of Michael Jackson crying hysterically in his private apartment at Neverland Ranch after his sweet pet chimp Bubbles beat the crap out of him. Which reminded me of my pre-teen research, and the oft-repeated lesson in the exotic pet trade that nothing is quite so mean as a mature chimp held captive by nutjob humans who should know better.

So when I see Drudge's latest tabloid purple involves an overfed Xanax-fueled chimp in Stamford going postal, with a bit of Morgan Fairchild thrown in for for that extra little frisson of avant-pop WTF?, I can't help but wonder how many little downscale Michael Jacksons are out there in suburbia, spending the long quanta of their leisure time inventing increasingly mutant variations on their imperceptible selves, complete with homunculi rebelling against their twisted, misguided, velvet confinement.

The chilling screams of a crazed chimp mauling a Connecticut woman were captured on a 911 tape - along with the animal's owner begging, "Send police with guns!"

The 15-minute recording captures the bizarre horror of Monday's attack, which left a 55-year-old woman critically injured and the 200-pound ape dead in a hail of police gunfire.

"Hurry, please! He ripped her face off," the ape's frantic owner, Sandy Herold, 70, is heard telling the dispatcher on the tapes released Tuesday night.

"Listen to me, you have to shoot him."

The terrifying screeches of Travis the chimpanzee are heard as he mercilessly pounces on Herold's pal, Charla Nash.

"He killed her!" Herold told the dispatcher. "He ripped her apart. He tried attacking me. How fast can you get here?"

The dispatcher sounds incredulous as Herold describes how she had to stab the burly ape and only aggravated him.

"He's eating her," Herold screamed. "Please have them go faster."

When cops arrived at Herold's Stamford home, she can be heard yelling for them to "Shoot him!"

Nash was so disfigured that a cop on the scene mistook her for a man, telling the dispatcher, "He's got no face."

Fighting back tears Tuesday, Herold mourned the death of her beloved chimp and expressed concern for her friend.

"He was all I had," Herold said outside her home.

She painfully recounted how she stabbed her 15-year-old chimp with a butcher's knife, trying to stop the attack.

Cops shot and killed the rampaging primate when he cornered them in a squad car.

"To do what I did, it was the worst thing in the world," said Herold, a widow whose only daughter died in a car accident.

"He was my kid ... I never left the house without kissing him goodbye."


Herold revealed her heartbreak moments before she headed to Stamford Hospital to visit Nash, who underwent surgery Monday night.

What triggered the normally docile chimp's brutal attack remained unclear. Herold suggested that Travis, who appeared in TV commercials and delighted in sipping wine and surfing the Internet, pounced on Nash because he didn't recognize her.

"She always wore her hair long and brown," Herold said. "Friday she had her hair done. She cut it blond and fluffy. And she was in a different car."

Herold added: "He was very protective of me."

Travis' violence may be linked to a recent bout with Lyme disease, a tick-borne infection that can cause paranoia and mood swings in people, said Stamford police Capt. Richard Conklin.

Cops say that before Travis went berserk, Herold gave him the anti-anxiety drug Xanax because he was acting up. Herold said he never took the drug.

Either way, Travis escaped the house and was running around the lawn when Nash arrived with a stuffed Elmo doll to help coax him back inside. Travis set upon her immediately.

When cops arrived, Travis tore off a police cruiser's side mirror and opened the door, prompting a cornered cop to open fire on the burly ape.

The bleeding chimp staggered back into the house and died.

"I don't blame the cop for what he did," Herold said. "It's a tragedy on both sides."

The attack stunned Herold's friends and neighbors - and even left actress Morgan Fairchild, who once appeared alongside Travis in an Old Navy ad, devastated.

"This is not at all the personality I worked with," Fairchild told the Daily News. "It was like having a very bright child on the set that wanted to be a part of everything. He was just an amiable little guy, friendly and just loved to be the center of attention."

If I were to suggest I'm on the chimp's side, would you say I am even crazier than the "owner" who created this situation? Crazier than Michael Jackson dressing up his simian alter ego in matching gold epaulets, and surprised when the familiar lashes back like Charlton Heston in Planet of the Apes? I am sure you are right.

Recommended viewing: Conquest of the Planet of the Apes (1972), the fourth in the series, featuring a dystopian near-future (1991!) in which apes, having been domesticated as pets and servants by humans following a plague that kills all the cats and dogs, revolt and overthrow their human masters under the leadership of a chimpanzee from the future. Worth it for the soundtrack alone, to say nothing of the back-to-back Roddy McDowell and Richardo Montalban, and now seeming more prescient than I ever would have imagined. Now re-released in a director's cut (!) reviewed here.

Posted by Christopher Brown at 10:06 PM

Doug Moench's rather free adaptation of Beneath PotA was superb & even more creepily dystopian than the film.

I think most people are on the chimp's side. Though equally I feel that most will concede that when one is confronted with a 200lb wild animal with seven times the strength of a human a craving to bite one's face off, one's best friends are Smith & Wesson. Regrettable, but that's what you get when irresponsible fools treat a wild animal as a pet.

Frankly, a shark is a better pet. They are at least predictable. They swim & eat. Chimps are a lot like humans, sympathetic, curious, emotional, & cruel (Jane Goodall's revelations still give me the heebie-jeebies). That ups the danger level quite a bit, though of course humans are by far the greatest danger possible.

The striking thing about this pop-culture chain reaction is how quickly Obama, politics & race got dragged in.

Astute comments, Dave. Do you have a shark? Have you been to the club on 4th Street that supposedly has a shark in a glass tank under the floor?

I never had a shark nor saw a domestic one besides those 2" long ones in the fish section of the pet store. I guess I don't go to clubs b/c I am old.

When I was a lad, I DID have Siamese Fighting Fish. Alas, despite the fearsome name, they are relatively ineffective as bodyguards/assassins.

Another thought, Ancient Egyptian police used to patrol the streets with attack baboons. I used that in an as-yet unpublished Sword & Sorcery tale.