How many hours for the interrogation badge? 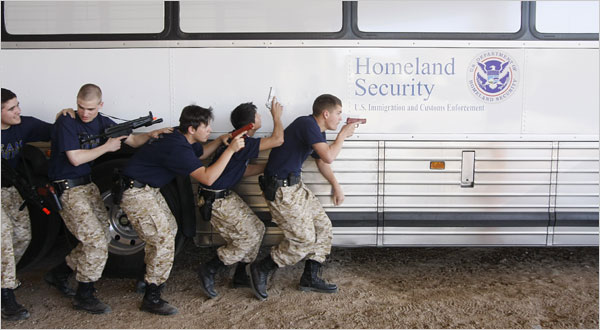 At today's NYT, the Homeland Security Boy Scouts, taking American capacity for earnest unintentional self-parody. I imagine Cheney in exile will have a coterie of attractive teen body guards.

IMPERIAL, Calif. — Ten minutes into arrant mayhem in this town near the Mexican border, and the gunman, a disgruntled Iraq war veteran, has already taken out two people, one slumped in his desk, the other covered in blood on the floor.

“United States Border Patrol! Put your hands up!” screams one in a voice cracking with adolescent determination as the suspect is subdued.

It is all quite a step up from the square knot.

The Explorers program, a coeducational affiliate of the Boy Scouts of America that began 60 years ago, is training thousands of young people in skills used to confront terrorism, illegal immigration and escalating border violence — an intense ratcheting up of one of the group’s longtime missions to prepare youths for more traditional jobs as police officers and firefighters.

“This is about being a true-blooded American guy and girl,” said A. J. Lowenthal, a sheriff’s deputy here in Imperial County, whose life clock, he says, is set around the Explorers events he helps run. “It fits right in with the honor and bravery of the Boy Scouts.”

The training, which leaders say is not intended to be applied outside the simulated Explorer setting, can involve chasing down illegal border crossers as well as more dangerous situations that include facing down terrorists and taking out “active shooters,” like those who bring gunfire and death to college campuses. In a simulation here of a raid on a marijuana field, several Explorers were instructed on how to quiet an obstreperous lookout.

“Put him on his face and put a knee in his back,” a Border Patrol agent explained. “I guarantee that he’ll shut up.”

One participant, Felix Arce, 16, said he liked “the discipline of the program,” which was something he said his life was lacking. “I want to be a lawyer, and this teaches you about how crimes are committed,” he said.

Cathy Noriego, also 16, said she was attracted by the guns. The group uses compressed-air guns — known as airsoft guns, which fire tiny plastic pellets — in the training exercises, and sometimes they shoot real guns on a closed range. 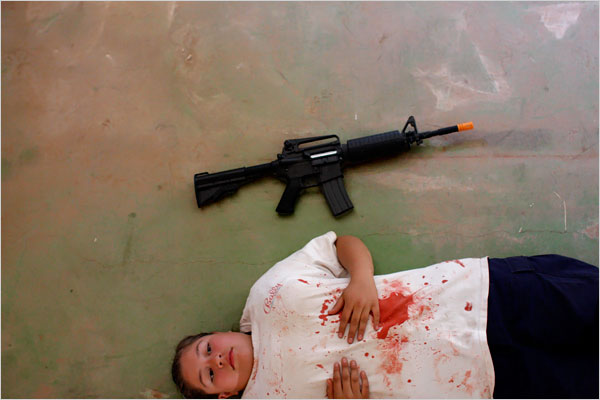 Posted by Christopher Brown at 8:00 AM

All fun and games until one of those uber trained scouts grows up and gets indiscriminately shooty.

In context Baden Powell came up for the idea of the Scouting movement while using young boys as runners to help him fight off the Boers.