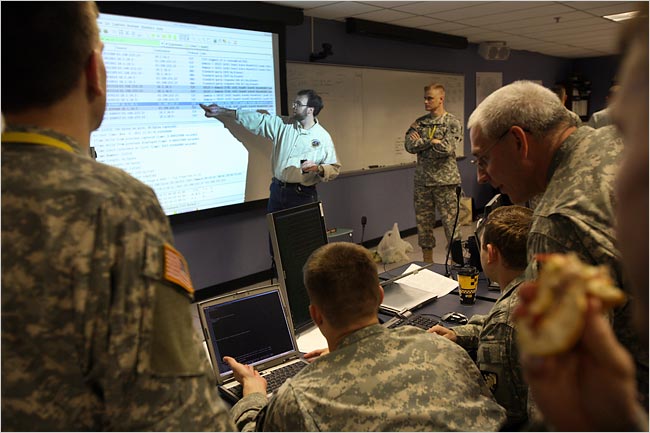 Great NYT piece this morning on cyberwar training at West Point. Yes, there really is a "57th Information Aggressor Squadron," and the US Army is a Linux shop.

In the desert outside Las Vegas, in a series of inconspicuous trailers, some of the most highly motivated hackers in the United States spend their days and nights probing the military’s vast computer networks for weaknesses to exploit.

These hackers — many of whom got their start as teenagers devoted to computer screens in their basements — have access to the latest in attack software. Some of it was developed by cryptologists at the N.S.A., the nation’s largest intelligence agency, where most of the government’s talent for breaking and making computer codes resides.

The hackers have an official name — the 57th Information Aggressor Squadron — and a real home, Nellis Air Force Base.

(See Trevor Paglen's amazing book of secret military patches, I COULD TELL YOU BUT THEN YOU WOULD HAVE TO BE DESTROYED BY ME.)

Posted by Christopher Brown at 8:11 AM