The Nebula Awards® are voted on, and presented by, active members of SFWA. The awards were announced at the Nebula Awards® Banquet held at the Hilton Cocoa Beach Oceanfront the evening of May 15.

Additional Honors
During the ceremonies, Joe Haldeman was honored as the next Damon Knight Grand Master, while Neal Barrett, Jr., was honored as Author Emeritus. Vonda N. McIntyre and Keith Stokes were honored with SFWA Service Awards while the SFWA Solstice Award, bestowed upon individuals who have made a significant impact on the science fiction or fantasy landscape, was presented to Tom Doherty, Terri Windling and the late Donald A. Wollheim.

About SFWA
Founded in 1965 by the late Damon Knight, Science Fiction and Fantasy Writers of America brings together the most successful and daring writers of speculative fiction throughout the world.

Since its inception, SFWA® has grown in numbers and influence until it is now widely recognized as one of the most effective non-profit writers' organizations in existence, boasting a membership of approximately 1,500 science fiction and fantasy writers as well as artists, editors and allied professionals. Each year the organization presents the prestigious Nebula Awards® for the year’s best literary and dramatic works of speculative fiction.
Posted by Jayme Lynn Blaschke at 10:01 PM No comments:

Recently I had lunch with my writer friend Bridget and we got onto the topic of BP’s broken oil well bleeding into the ocean. I mentioned that of the major oil companies, BP is the one that insiders say has a history of putting profits ahead of safety. I heard that from somebody who retired from Exxon-Mobil management.

Bridget retorted, “Say Exxon, and people think Valdez!” She went on to say, “Every time the subject of government regulation comes up, the big oil companies say they can regulate themselves and it works better if it’s voluntary. Well, then, they ought to volunteer right out into the Gulf of Mexico and not just leave it to BP. They have thousands of smart engineers and billions of dollars. Let every one of those oil companies get out there and help do something about that oil spill. That’s the only way they’ll come out of this with any credibility left.”

She’s got a point. This one looks so bad. And so unnecessary. The newspaper’s had plenty of reporting about blowout preventers having failed before, just not catastrophically. This one is public knowledge to an incredible degree, too. My boss’ two-year-old grandson in Seattle asked his mom if he was too young to go help clean the birds and beaches!
Posted by Alexis Glynn Latner at 6:46 PM No comments: 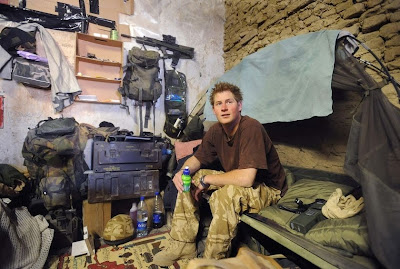 As the media erupts in celebration of the terrorist next door meme, telephotos the latest love trusts of the photogenic Wales boys, and hides M.I.A.'s revolutionary new video, the fine fellows at Futurismic have just posted a new story I was fortunate enough to co-author with Bruce Sterling. Bruce and I hatched the idea while hanging out in Mexico City last for the Mundos Paralelos symposium at the Festival de Mexico: I was admiring the combat ready bodyguard's son in the gossipy pages of Hola! magazine, Bruce was pondering Terry Schiavo and her Italian analog as the world's first posthumans; add street corner machine guns and large quantities of Tequila, and the result is Blackwater Prince Harry. An excerpt:

Popular celebrations break the general darkness for the 100th birthday of the world’s first posthuman monarch. Queen Elizabeth II is not alive, nor is she dead. Suspended under glass in icy limbo, she awaits the inevitable. Heretics who question the Queen’s ‘divine right to persist’ swing from the surveillance lamps over the burning cars.

Five long years since our Queen fell and could not rise. Elizabeth has joined the ranks of prominent women deemed too important to die. Britain has never come to proper terms with life-extension.

Our elite zombies have become the obverse of our working-class suicide cults. The flesh of young women explodes among us daily while centenarians dream on ice.

The last functional segment of Government is the propaganda wing of the Royal Household — now run mostly by Americans.

The only viable tactical path is ‘direct action’ — to exorcise the royal ghost from her Westminster crypt. Yes, that means ‘assassination’ — in some strictly technical sense.

We forecast a techno-regicide. At Janes, it is our unpleasant business to assess the military odds of success.

The Archbishop of Canterbury and the Emir of Dubai make unlikely allies. But since someone’s hand must pull the royal plug, why not some helpful, understanding pagan? They can pay, and they can pardon.

The radical wing of Plaid Cymru killed the Prince of Wales when Charles was eighty. The Welsh separatists also bombed the Imperial College, where the Queen was once stored. But after the terrible vengeance of ‘Windsor Executive Solutions’ — which made Cardiff a crater and called that ‘peace’ — Plaid Cymru is urban legend.

Our NATO alliance with the United States offers us airstrikes on demand. Brussels offers us mussels and Tintin cartoons. The United Nations is beyond any use to anyone. And Prince William, after his doomed attempt to live like a human being, suffered a complete mental breakdown.

So Windsor Executive Solutions are — we must conclude — the final solution.

The Black Prince will strike, because his people demand it. His global guerrilla army is the only entity capable of mounting a coup. ‘Blackwater Prince Harry’ must annihilate his frozen grandmother and resuscitate the failed state.

Harry’s press spokesman is ‘Lord Falstaff’: an exiled American — fat, boozy, bizarrely charismatic, carousing across the ruins of the Middle East. Falstaff’s drawling provocations crackle over pirate feeds at every cornershop. Each time the Prince’s acolytes shoot an elected official, Falstaff immortalizes it.

‘Public opinion,’ the artifact of a vanished public order, has ceased to exist. There are no reporters, and there are no chattering classes. Falstaff hunts and kills the lonely bloggers hunched over their laptops.

Blinded by the light of fiber optics, we descended into darkness. By the time we realized the depth of the abyss, we were too low and weak to escape.

Harry’s drunken bandits are modern cult heroes, worship-figures. The pogroms of the Blackwater Prince go unquestioned by anyone. In today’s Internetherworld, ‘fact,’ reality,’ and the ‘official story,’ have vanished in a cabinet of monstrosities. Beset on all sides by collapse, bereft of the mass consent once engineered by mass media, we breathe legends, rumors, folk-tales, pop-songs, and terror.

We at Janes therefore conclude that Windsor Executive Solutions, inevitably mutating from multinational corporation, to Praetorian Guard, to a hungry mob, must devour the frozen flesh of Queen Elizabeth.


Check it out.
Posted by Christopher Brown at 1:55 PM 1 comment: