Or, flying submarine theater, at least. I spent most of yesterday over at Aquarena Center, riding herd on the media gathered to watch an unusual sight--the removal of the 400-plus-ton Submarine Theater from Spring Lake, the headwaters of the San Marcos River. 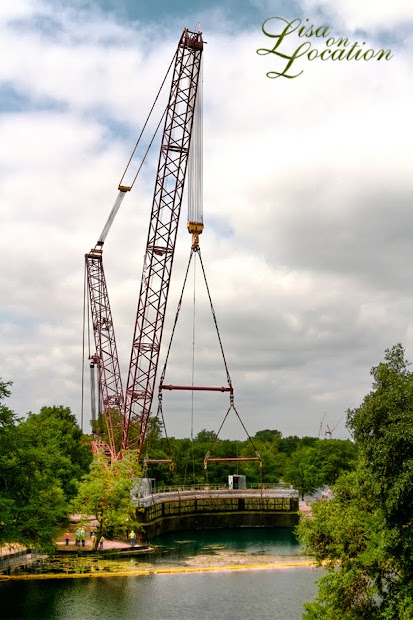 For those of you keeping score at home, the university, in conjunction with the Corps of Engineers, attempted to remove the old theater back in February using an assortment of heavy-duty construction cranes, the largest being a 500-tonner. They failed to lift the Submarine Theater after several days of trying. The pause button was hit and the situation re-evaluated. The Theater, it seems, was heavier than originally estimated, and the angle the cranes had to work at was too low for effective liftage. 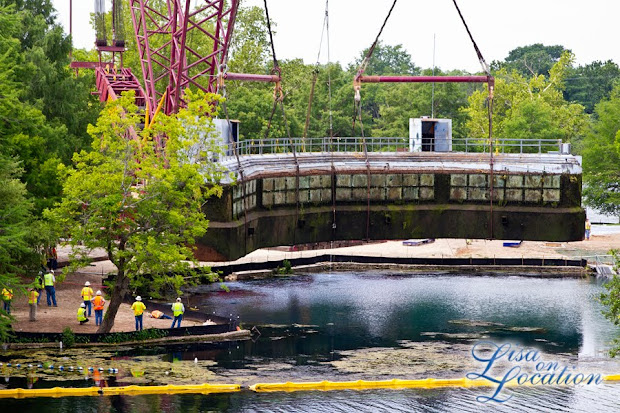 Not so this time. Using one of the largest industrial cranes in the U.S. with an 1,800-ton lifting capacity (it took 100 semi trucks to bring it in and assemble in place), the massive underwater theater came out with nary a ripple. That's not an exaggeration--the crane lifted the huge bulk very slowly to guard against any accidents (lifting straps snapped on one attempted lift back in February, sending the Submarine Theater crashing back into the lake) but also to avoid stirring up sediments and polluting the river and lake. The lifting began around 9:30 a.m., paused around 10:15 for more counter-weights to be added, and by 11:30 the entire Submarine Theater had successfully moved to dry land. The slow pace also allowed an estimated 100 tons of lake water to drain from the enormous ballast tanks. 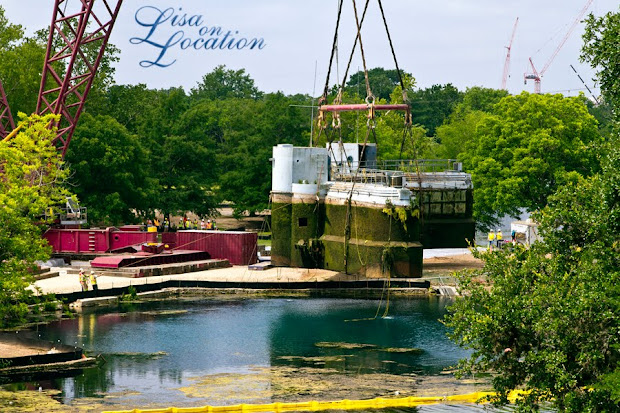 The old theater was once the centerpiece of the Aquarena Springs amusement park, and would submerge to treat audiences to "mermaid" shows in the crystal clear waters. By the time Texas State bought the park in the early '90s, competition from other entertainment destinations had nearly driven the park to bankruptcy. In 1996 the university closed Aquarena Springs for good and began the restoration project, converting it to Aquarena Center for the study of water science and the preservation of quite a few endangered species that live in the waters. The decaying theater needed to be removed because of its potential to contaminate the lake and river. Not to mention the fact that it'd become a dangerous eyesore. It will now be cut up and dismantled on shore, and trucked off for recycling. The glass windows may be removed and incorporated into an art project for a planned visitor's center at Aquarena, but not much else is salvageable. Personally, I think they should relocate it to Bobcat Stadium and renovate it into luxury suites. It'd be unique, if nothing else! 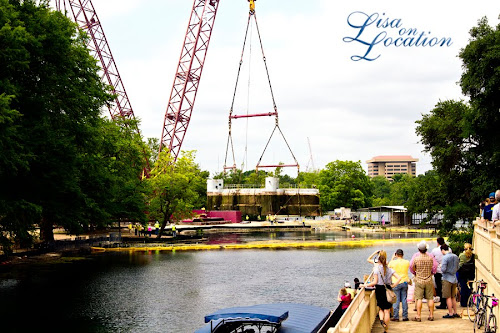 Me being me, I couldn't resist shooting a few images in infrared. The clouds drove me nuts by changing the light quality constantly, passing over the sun as they did, but ultimately I got a few images with some decent contrast. I never get tired of that white, infrared foliage on the trees! 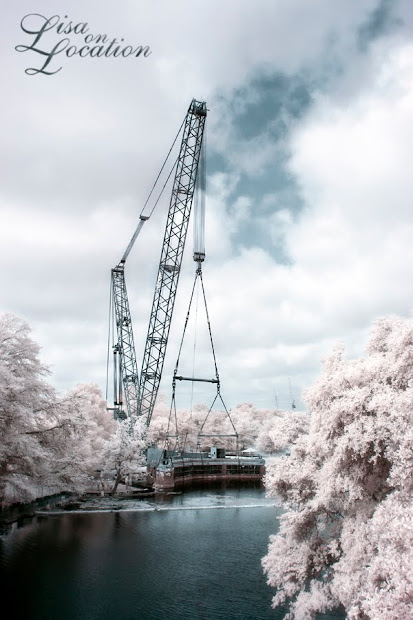 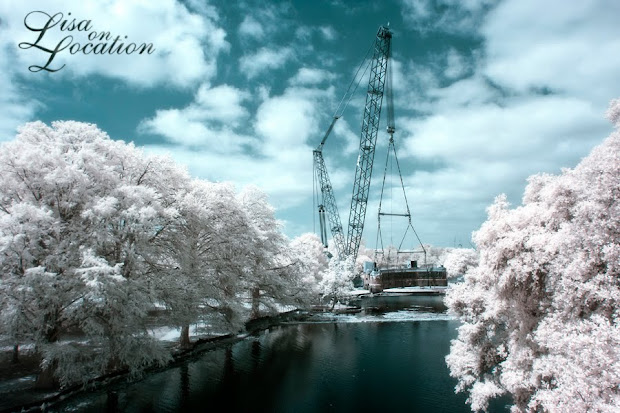 Posted by Jayme Lynn Blaschke at 1:58 PM No comments:

Email ThisBlogThis!Share to TwitterShare to FacebookShare to Pinterest
Labels: Aquarena

Science Fiction in the Edgelands

My essay "Science Fiction in the Edgelands" is up—online and in the April print issue—at The New York Review of Science Fiction. NYRSF is one of my very favorite publications. Editor David Hartwell has been using it as a forum for the very best sf criticism for the past 24 years (with immense help from his colleagues Kevin Maroney, Alex Donald, Kris Dikeman, Avram Grumer, and Samuel R. Delany). NYRSF was pretty much exclusively print until they ran into printer problems last year, leading the very exciting result that they are transitioning to electronic publication. As part of this effort, they are adding more content to their website, including putting featured articles online for non-subscribers to enjoy. I am delighted that my piece is the featured article for the April issue.

My piece is a report from last year's science fictional interventions at the Tijuana border crossing organized by Pepe Rojo and his colleagues, and an essay about borders and the future based on the remarks I gave at that conference. By way of a teaser, here's a video of las Bio(Mecánicas)—cyborg dancers visiting the border crossing from the future:

If you value quality sf criticism, and think it's important to have a well-curated outlet for longer essays about topics of genre interest, please consider subscribing to NYRSF, and pipe in on their new Facebook page—all of which is right here.

Posted by Christopher Brown at 7:03 AM No comments:

In the past couple of months, a new billboard has appeared around Austin advertising Indio Beer, a new entrant to the US market. An Aztec warrior emerges from the jungle: "COMING PRONTO." (See above pic from Lamar Boulevard, courtesy of The Marcos Kirsch Experience.) Since I don't really watch television, I have to rely on billboards as one of my principal commercial cultural barometers. Billboards during the bust have become heavily focused on selling capitalism's cheapest and most proletarian anesthetic—beer (along with healthy doses of tequila and spirits with a Caribbean theme, often actually named after a pirate). And you can't help but notice how much of the advertising is devoted to peddling the beers of Mexico.


The core semiotic cues are all the same: beach, sand, surf, beauty, lime, sun, the Pacific, and lots of skin, perhaps with some lucha libre masks thrown in for ironic good measure. Ever notice how our Mexican beer ads rarely feature an actual Mexican? Even when they are self-evidently set in an unspecified Mexican fantasy location? That's because the beaches those dudes are visiting (sometimes with their hot but somewhat stuck-up Greek style girlfriends) are not actually set in Mexico. They are set in a dream world where we escape from the alienating cubicle grind of our lives as servants of 21st century Capital. You will never see a computer in a Mexican beer commercial, unless you count the Blackberry that vacationing investment banker tosses into el Pacifico in the above Corona ad. The idea of "Mexico" in contemporary American culture expresses our yearning for a place we can actually travel to where you don't have to live like *this*—and the beers (and tequilas and Margaritaville rums) provide us an actual means to simulate that escape, by lubricating our inner Benjamin Franklins into Dionysian liberation, in a mode that generates plenty of dinero for the Man.

Every year during the first week of May the media fills with arch features explaining what a ridiculous holiday we celebrate with Cinco de Mayo. The stories typically try to demythologize the idea of the holiday as Mexican Independence Day, explaining that it commemorates the 1862 Battle of Puebla against French forces of Napoleon III, in the struggle that ultimately resulted in the imposition of Maximilian I as dictator—a regional holiday celebrated in Puebla that has become, the stories always note, an excuse to sell Mexican beer. This Huff Post piece is more helpful, explaining Cinco de Mayo as a Latino-American identity celebration. But that still doesn't explain why the gringos are having so much fun, does it?

There's a Puritan subtext in all those mainstream media stories purporting to debunk the idea of Cinco de Mayo as a "real" holiday. No surprise, when you read a little more, and realize that the infiltration of Mexican beer into American culture really happened during Prohibition, when Californians and Texans would drive over a hot desert border to drink cold beer and recover their right to party. And now we get to drink their beer right here. Cinco de Mayo, gringo style, *is* Mexican Independence Day—specifically, the day on which we celebrate the idea of Mexico as the semiotic cue we use to liberate ourselves from the well-wired dominion of the Protestant ethic and the spirit of Capitalism (si, claro, in a way that also pays sacrifice to that spirit). Squeeze a lime in that, Max Weber!

There's another important subtext lurking in all this, as well, I think. You can see it in Indio's Aztec warrior emerging from the jungles into our frontage roads. You can see it in the very un-American (and subtly threatening) masculinity of Dos Equis's "The Most Interesting Man in the World." And you can see it in the Mexican beer ads targeted at Mexicans living in the US, with their expressions of Mexican nationalism (and even in the *American* beer ads targeting the Latino population—like the BudLight ads with Pitbull). Mexican beers are probably the leading Mexican export to the US that's actually Mexican (as opposed to the electronic and automotive components we pay Mexican labor to produce for us at the other end of the Nafta express—digest this statistical analysis of Mexico-US import-export activity for some mind-blowing revelation). Their successful infiltration of American culture on its own terms represents a powerful articulation of that unspoken dream of reclamation, a vanguard for the demographic reclamation in process.

Maybe, in this symbiosis, there's another dream—one of real cultural integration, and the end of borders.


In the meantime, as you mourn the death of MCA, and examine your inner Prohibitionist that needs to be put in a time out, consider whether the silliest anthem of the 80s didn't have a point: ¡Es verdad que tienes que luchar por tu derecho a enfiestarte!

Posted by Christopher Brown at 9:26 AM 4 comments: