Just a quick heads-up on a LoneStarCon 3 media announcement I just sent out today. A good deal if you've got a geeky significant other you need to find a stocking stuffer for!

LoneStarCon 3 offers limited time membership special November 19, 2012 SAN ANTONIO, Texas – LoneStarCon 3, the 71st World Science Fiction Convention, has announced a special two-week membership sale running Nov. 19-Dec. 2. Attending memberships will be available for the reduced rate of $170 until midnight, Dec. 2. In addition to full access to the convention, attending memberships entitle the holder to make nominations for the Hugo Awards, receive pre-convention publications and advance information featured guests, exhibits and special events such as the LoneStarCon 3 International Film Festival. "The committee saw this as an opportunity to say 'Thank you' to the fan communities who've given LoneStarCon 3 so much encouragement and support," said Laura Domitz, convention co-chair. "Think of it as getting a jump on the end-of-year holiday spirit." Regular convention membership rates are scheduled to increase Dec. 31. LoneStarCon 3 will be held Aug. 29-Sept. 2, 2013, at the Henry B. Gonzalez Convention Center in San Antonio, Texas. The Mariott Rivercenter and Mariott Riverwalk will serve as the host hotels. This marks the first time since 1997 that the Alamo City has hosted a Worldcon, when LoneStarCon 2 drew thousands to the downtown convention center. The guests of honor list for LoneStarCon 3 includes Ellen Datlow, James Gunn, Norman Spinrad and Willie Siros, with Paul Cornell serving as toastmaster and featuring special guests Leslie Fish and Joe R. Lansdale. Artist guest of honor Darrell K. Sweet tragically passed away Dec. 5, 2011. MEMBERSHIPS Attending membership rates for LoneStarCon 3 are normally $180 for adults, $110 for young adult (17-21 years old), $75 for children (16 and under) and $480 for family memberships. The listed membership rates are good through December 31, 2012. The sale only lowers the rate for adult attending memberships ($170) and family memberships ($460). LoneStarCon 3 is also offering a military discount rate of $110, which is not subject to future increases. ABOUT THE WORLD SCIENCE FICTION CONVENTION Founded in 1939, the World Science Fiction Convention is one of the largest international gatherings of authors, artists, editors, publishers and fans of science fiction and fantasy entertainment. The annual Hugo Awards, the leading award for excellence in the field of science fiction and fantasy, are voted on by Worldcon membership and presented during the convention. LoneStarCon 3 is sponsored by ALAMO, Inc., (Alamo Literary Arts Maintenance Organization), a 501(c)3 organization. For more information about LoneStarCon 3, memberships or hotel information, visit www.LoneStarCon3.org.

Posted by Jayme Lynn Blaschke at 10:34 AM No comments:

Email ThisBlogThis!Share to TwitterShare to FacebookShare to Pinterest
Labels: worldcon

Meanwhile, in an undisclosed secret location beneath Democracy Plaza 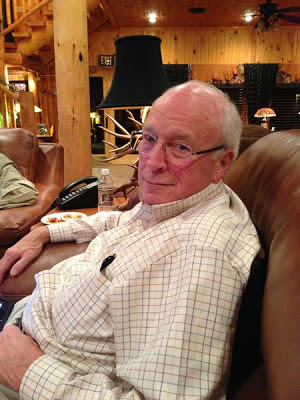 [Pic: Our secret cyborg overlord pictured watching the returns in the man cave of his Wyoming Eagle's Nest, while "interviews" using enhanced interrogation techniques are livestreamed to the iPad in his lap. Picture from Mary Cheney's Instagram feed, via Bruce Sterling.]

This was the first US presidential election I have watched without a television in my home. When I moved last year, I realized I had not watched television at home in more than a year, and decided it was finally time to live without it. So now I get my news from the web, the radio, and my anachronistic daily delivery of the print newspaper.

When there are breaking news events of the sort that make me want to see live video from major networks, I am limited to what I can get over the Web. So last night we watched the returns with a late model laptop, an 1990s-style software salesman's projector purchased at the CompUSA going out of business sale, a 1960s Da-Lite movie screen purchased on EBay, and a high wattage analog English stereo system best suited for blasting old vinyl. It's a bit of work to set up, and that's a good thing.

Watching the network returns on the Net provided a glimpse of the big three broadcasting networks trying to figure out how to evolve their journalistic business models to keep up with contemporary media. How do they attract the eyeballs and ears and minds of people like me, for whom a television connected to broadcast or cable networks is as anachronistic as a land line telephone? And how do they make money from it once they do that?

CBS was the only one of the big three that provided the full broadcast content online, complete with Scott Pelley as the post-Cronkite voice of calm authority and Bob Schieffer commenting live from the middle of the twentieth century. During the broadcast commercial breaks, the CBS Net stream switched over to CBS Radio's live coverage. Using voice content to fill downtime during a network stream (or other time-consuming computer process) is a great idea.

NBC online reported with deadpan self-parody "Live from Democracy Plaza" with Brian Williams anchoring and David Gregory and Savannah Guthrie at the table with him. But except when it was time for the gnomes to put another color sheet over the giant map of the states embedded in the ice rink (!), the online coverage was a clone cast provided by the NBC News Teen Titans, most of whom seemed like they were unsuccessfully trying to channel the news anchors they had grown up watching. There was no discussion in either stream of the irony in the fact that "Democracy Plaza" is the courtyard of a corporate office park, the true name of which is that of the Gilded Age robber barons that built it.

ABC News had a complete alternate network for its online coverage: ABCNews.Com • Yahoo! News. Diane Sawyer and George Stephanopolous only appeared after the election had been called for Obama, and the commercials had stopped pending the victory speech. There was no clear indication that you were getting an alternate version of ABC News. The set had all the same signifiers, the people were dressed the same, and the content architecture was essentially identical. But you quickly figured out this was ABC News with the interns in charge. ABC is using its online channel as a farm league to develop its new talent, and to provide a place to use old talent that no longer cuts it in prime time. The anchor desk was filled with three thirtysomething newcomers (anchor Dan Harris, Political Director Amy Walter, and Yahoo! News analyst Olivier Knox) and old timers Jeff Greenfield and Walter Shapiro.

And of course there was C-SPAN online at the ready with all the unprocessed political content you could eat.

A few observations from an evening devouring this content produced by a mass media driving with fog lights toward a new information architecture that has not yet been designed:

- The Net has a way of stripping the cultivated institutional authority away from the bid media networks, whether it's the evening news anchors struggling to keep our attention on them amidst the surrounding social media feeds, or the tendency towards amateur night fourth wall violations—as when ABC's Dan Harris cut off a colleague to proclaim "We can now tell you who won Kansas," unfurled the check box graphic, then cut himself off with "wait, we have to wait five seconds before we can show you that," and a moment later explained "sorry, the voice in my earpiece was telling me what to do."

- You can now watch network news coverage in which the anchor cuts to the reporter in the field and says "Holly, how are things going out there in the Internet?" [actual quote]

- The big networks still build their coverage on the platform of telegenic anchors and commentators, and they mostly provide no more than stock ticker-quality supplemental information in their banners. Last night we were constantly supplementing the net coverage with more detailed information available through other Web sources—just as the anchors were doing on-screen with their own laptops. When the networks use their resources to serve as clearinghouses of unprocessed information, curate the information at more intermediate stages of filtering, and use the video content and live subjective analysis as garnish, they will be closer to providing the unlimited information that 21st century news consumers really want.

- The emergence of alternate online versions of the major network news platforms has radical potential. Someday soon more innovative producers, anchors and analysts will realize the opportunity to reinvent mass media news on one of those platforms during some major event, and Dan Rather's ghost will be on a frequency you can no longer tune, Kenneth.

- What the network news personalities do on live television is a lot harder than it looks, and you can see it on the intern versions. This was especially apparent on ABC News.COM • Yahoo! News, in which it was clear all five people on camera were viciously competing to outperform each other, creating a stress lab in which the youngsters all flubbed badly—losing trains of thought mid-sentence, rambling into dead air nonsequiturs, defaulting to the pseudo-authoritative misdirection of big vocabulary (as when Olivier Knox concluded a stumbling comment by characterizing his view as "not Panglossian," eliciting the gleeful competitive ridicule of elder Jeff Greenfield).

- The business of television journalism remains fiercely competitive even as its relevance diminishes, with the on-air behavior characterized by an astonishing amount of troglodytic nonverbal gender domination cues. Just ask ABC News Political Director Amy Walter, whose first ninety minutes looked like the makings of a cathode ray hostile work environment that prevented her from projecting her normal confidence and insight until late in the night. Broadcast journalism is still dominated by preening dudes who are scared of (or at least fiercely competitive with) strong women. ((See, e.g., Ann Curry.))

- The information architecture of TV network election coverage is based on invented drama to keep you from turning the channel before the commercial, fueled by a sucker's adoration of democratic myths. In time, manufactured suspense will be replaced with parallel information streams that you can hop between. It's already happening in small doses.

- When election night broadcasts cut to unscripted speeches by candidates to their supporters live in a room, one is reminded of the potential power of pre-televisual political rhetoric. Can network culture provide a new oratorical forum unmediated by broadcaster yapping and editing?

- Does NBC really think they will inspire my confidence in our electoral system by showing me a roomful of volunteer geezers in portable chairs opening and sorting green envelopes?

- Did Nancy Pelosi really say "We're all for TEAM USA"?!

- Do you think @katiecouric writes her own Tweets?

- Who writes the music for television news themes? Why do the rites of republican democracy merit more venerable melodic loops than the fearcasts of war and disaster?

- Who picks the color coding of the political parties? Apparently it was in the 2000 elections that the common coding switched to cool blue for the left Dems and radical red for the right Repubs. I think the semiotic power of those codings is much more significant than we realize, and reflects a big shift in which party is positioned as the change agent.

- Why do I know the names of several of Mitt Romney's children, and how can I make myself forget?

- Watching the chorus of party representatives commenting across all media, it seems that 21st century political parties are like corporations where everyone works in the PR department, and is elected to their corporate office by their customers.

- Is the non-election of Mitt Romney a sign that we have put the last nail in the coffin of the Zeitgeist of the 80s?

- When can we abandon the pretense and just conduct all of our elections as viewer-decided reality TV shows ending in statistical ties resolved through prolonged litigation?

- (Howard Beale, where are you when we need you?)

- Why is Dick Cheney still smiling?

Posted by Christopher Brown at 1:46 PM No comments: