Posted by Christopher Brown at 8:04 AM No comments:

Posted by Christopher Brown at 8:48 AM No comments:

Resignation day. We finished up our resignation statements this morning, I had a meeting with Bull, Parker, Larry, and Kehrli to impress upon them the need to carry on the ongoing system just as it is until a new system was worked out and ready to put into place, and urged that they not fall into the trap of any sort of internal struggle for position. And explained the importance of their holding everything tightly together during the interim period while the P would be in very tough emotional and physical shape, and so on.

Ehrlichman and I then met with the senior staff. Shultz couldn't be there because he was testifying on the Hill, but we had Ash, and Kissinger, Timmons, and Ken Cole, and told them what our decision was, and made something of the same points. John was very emotional in that session, broke down or was on the verge of it at least, several times. Everybody, I think, was genuinely shocked, and I think we successfully impressed on them also the need to deal very carefully with this interim period.

I made a number of phone calls, talked to Billy Graham. He seemed to feel it was the right thing to do, said that he didn't believe that in government he had met two finer men than Ehrlichman and me, and that we have his full support—he feels we've been caught in a web of evil that will ultimately be defeated. He has great affection and love for me as a man, that I should count him as a friend, and that what I'm doing is going to help the P.

— H.R. Haldeman, The Haldeman Diaries: Inside the Nixon White House (1994) 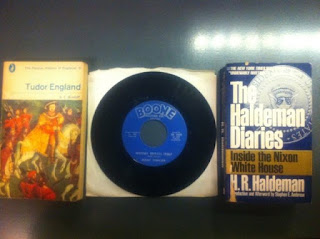 The above is the beginning of the final entry in H.R. "Bob" Haldeman's diaries of his years as Nixon's Chief of Staff, a tattered paperback copy of which I acquired recently while exploring the ruins of New Orleans. The resignation Haldeman refers to is his own—Nixon's would not come until a year later.

Perhaps I can blame the fact that I have been reading excerpts from Haldeman's diary for the Nixon flashback I had yesterday, as I glimpsed the images of the papal helicopter lifting off to deliver the Pope Emeritus to his Italian San Clemente.

I love interregnums. They represent the possibility of a world without kings. The idea of individual leaders seems deeply programmed into human culture, and there are few human socio-political institutions that don't rely on one, even if it is sometimes more titular that real. Whether it's the pope, or the President, or the CEO, when the Chief leaves without an immediate successor, and life goes on without any material difference, one can almost imagine a world in which our silverback programming could be hacked to remix our way toward a system based on something more harmonious than primate competition for power and dominion.

Interregnums induced by enigmatic resignations employed as a tactic to evade the transparency of justice are all the more interesting. Ritual exile can be a successful alternative to exposure of what really happens inside the institutions where the greatest repositories of human power are stored. You'll never know what these guys were really talking about. The past gets buried under the cathode ray snowfall of interregnum, and the need to keep the trains running.

Posted by Christopher Brown at 11:04 AM No comments: