The iceberg’s accomplice: Did the moon sink the Titanic?

Have I mentioned here how my day job can be very, very cool sometimes? Take today for instance--it's been incredibly busy with the phone ringing off the hook with reporters from BBC World Service, Chile, Australia and other destinations wanting to speak with the Texas State researchers who authored this latest paper in Sky & Telescope. Now, I didn't contribute to the research itself, but I did work closely with all involved to present it in this concise, tidy package for mass media consumption. It's the Titanic, it's science, and it's fascinating. 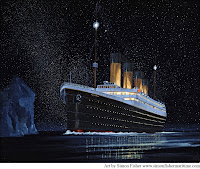 The sinking of the ocean liner Titanic 100 years ago is perhaps the most famous--and most studied--disaster of the 20th century. Countless books and movies have examined in great detail the actions, choices and mistakes that led to the Titanic colliding with an iceberg the night of April 14, 1912, and sinking within hours, with approximately 1,500 people losing their lives in the icy waters of the North Atlantic.

One question, however, has often been overlooked: Where did the killer iceberg come from, and could the moon have helped set the stage for disaster?

Now, a team of astronomers from Texas State University-San Marcos has applied its unique brand of celestial sleuthing to the disaster to examine how a rare lunar event stacked the deck against the Titanic. Their results shed new light on the hazardous sea ice conditions the ship boldly steamed into that fateful night. 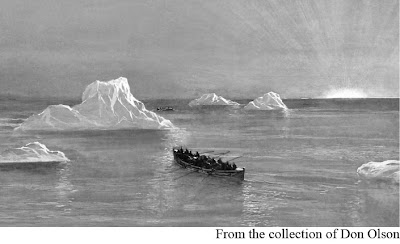 “Of course, the ultimate cause of the accident was that the ship struck an iceberg. The Titanic failed to slow down, even after having received several wireless messages warning of ice ahead,” Olson said. “They went full speed into a region with icebergs—that’s really what sank the ship, but the lunar connection may explain how an unusually large number of icebergs got into the path of the Titanic.” 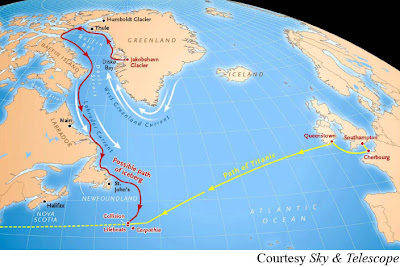 A tide for the ages

Inspired by the visionary work of the late oceanographer Fergus J. Wood of San Diego who suggested that an unusually close approach by the moon on Jan. 4, 1912, may have caused abnormally high tides, the Texas State research team investigated how pronounced this effect may have been.

What they found was that a once-in-many-lifetimes event occurred on that Jan. 4. The moon and sun had lined up in such a way their gravitational pulls enhanced each other, an effect well-known as a “spring tide.” The moon’s perigee—closest approach to Earth—proved to be its closest in 1,400 years, and came within six minutes of a full moon. On top of that, the Earth’s perihelion—closest approach to the sun—happened the day before. In astronomical terms, the odds of all these variables lining up in just the way they did were, well, astronomical. 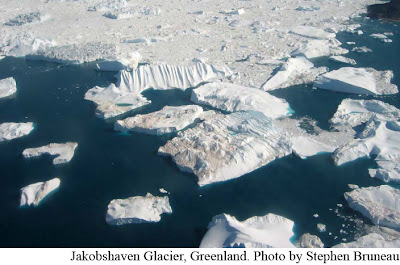 Initially, the researchers looked to see if the enhanced tides caused increased glacial calving in Greenland, where most icebergs in that part of the Atlantic originated. They quickly realized that to reach the shipping lanes by April when the Titanic sank, any icebergs breaking off the Greenland glaciers in Jan. 1912 would have to move unusually fast and against prevailing currents. But the ice field in the area the Titanic sank was so thick with icebergs responding rescue ships were forced to slow down. Icebergs were so numerous, in fact, that the shipping lanes were moved many miles to the south for the duration of the 1912 season. Where did so many icebergs come from? 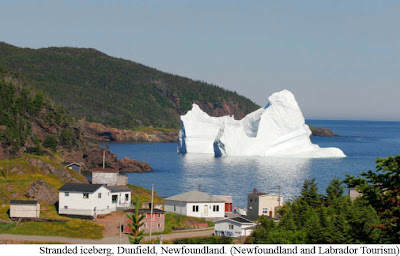 According to the Texas State group, the answer lies in grounded and stranded icebergs. As Greenland icebergs travel southward, many become stuck in the shallow waters off the coasts of Labrador and Newfoundland. Normally, icebergs remain in place and cannot resume moving southward until they’ve melted enough to refloat or a high enough tide frees them. A single iceberg can become stuck multiple times on its journey southward, a process that can take several years. But the unusually high tide in Jan. 1912 would have been enough to dislodge many of those icebergs and move them back into the southbound ocean currents, where they would have just enough time to reach the shipping lanes for that fateful encounter with the Titanic.

“As icebergs travel south, they often drift into shallow water and pause along the coasts of Labrador and Newfoundland. But an extremely high spring tide could refloat them, and the ebb tide would carry them back out into the Labrador Current where the icebergs would resume drifting southward,” Olson said. “That could explain the abundant icebergs in the spring of 1912. We don’t claim to know exactly where the Titanic iceberg was in January 1912—nobody can know that--but this is a plausible scenario intended to be scientifically reasonable.”
Posted by Jayme Lynn Blaschke at 10:01 AM No comments: