The "air pirate"--the pilot-bandit who uses his plane to rob other planes or, occasionally, ground targets--was for the most part solely a product of the imagination of pulp and radio writers. (There was the robbery of the cathedral in Barcelona, which I'll get around to describing one day, but that was a unique event).

More often, the "air pirate" of the 1920s and 1930s was something like this, which while not as exciting as the air pirate of the pulps is, from a certain perspective, plenty full of potential for writers and gamers:

It's not that I want to go back to the pulp era, exactly...

...it's just that the Now seemed so much more...entertaining and futuristic, I guess, than 2010 does. (Even granting John Scalzi's Mark Twain-esque observations about modern computers).

For example, this news article, from the Straits Times of Singapore, 23 July, 1928: 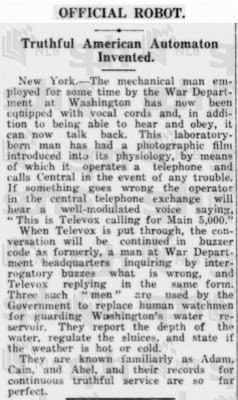 Yes, yes, new Apple trackpad and possible cures for Bubble Boy syndrome are all very nice. But...talking robots at the War Department! Tell me something inside you doesn't thrill at the thought of that.
Posted by Jess Nevins at 8:08 AM No comments:

I have no idea what's going on here.

but it involves Adam, Eve, Satan, and "Signor Gorilla."

Click on the image to open the .pdf of a 1919 article from the Winnipeg edition of the Icelandic newspaper Heimskringla.
Posted by Jess Nevins at 10:48 AM No comments:

"The Mechanical Man--He's In Laredo!"

Headline: THE MECHANICAL MAN-HE'S IN LAREDO

The mechanical man or robot was released from a huge box in front of the Laredo Times office on Monday evening at 6 o'clock and soon thereafter made his first public appearance at the Bohemian Club in Nuevo Laredo. In both instances numerous curious folks were on hand to see what they could see and decide for themselves whether it was robot or man.

Those who got an eyeful of the figure Monday evening were puzzled. Every movement of the figure was that joint-jerking action of the mechanical robot. His walk, handshakes and nods had all the laborious grace of a doll made of toothpicks. But the figure was firm and rounded and the wax face is so perfect that it is almost human.

But "Robot" drives an automobile with the same ease and precision of a regular driver, which again puzzles the observer as each movement is carefully watched. During the week "Robot" will drive a Ford and a Chevrolet on alternate days and will appear at the Gateway Chevrolet Co., Laredo Auto Sales Co., Bohemian Club, Labella Jardinera, Stowers Furniture Co., Franklin Bros. Department Store, Lion Music and Jewelry Co., Southern Plumbing C. and the R. and R. Royal Theatre.

[this is Laredo, Texas, of course. I leave it to you to imagine Laredo, Texas, in 1929, confronting a car-driving robot]
Posted by Jess Nevins at 9:35 AM No comments:

Arrr, mateys, that be trayf!


Edward Kritzler’s Jewish Pirates of the Caribbean is a fun read—well-documented but not scholarly, fast-moving and well-told. Yes, some of the pirates were Chosen, and some of these Chosen…well, let’s take a look at Samuel Palache, shall we?

To quote Kritzler, “he was a giant—merchant, pirate, conspirator, rabbi, ambassador, and founder of Amsterdam’s Jewish community.” No friend of Spain (for reasons obvious if you know anything of the history of Spain and the Jews), he took great pleasure in taking their ships. Palache regularly ran guns and munitions to the corsairs in Morocco in exchange for Spanish booty. In the spring of 1614, when Palache was in his sixties, he borrowed five thousand florins from the Dutch government (with a surety from Palache’s personal friend, Maurice of Nassau, the Prince of Orange) and equipped two ships, crewed almost entirely by former pirates.

Palache sailed to Morocco and got a privateer’s license. (Sidan, the ruler of Morocco, had been forced to kill his brother, who led a Spain-backed rebellion of radical Muslims, so Sidan had no love for Spain). Palache raised the black flag and set sail. Again quoting Kritzler, “carved on the bow of his ship was a phoenix, a mythical bird that lives a thousand years, is consumed by fire, and rises afresh from the ashes. It was his way of saying that Inquisition flames might burn individual Jews, but could not destroy their ancestral faith.” Naturally, Palache, as a Rabbi, took care to make sure his ship followed Halakhah, and employed a Jewish chef to prepare kosher meals.

Palache—remember, in his sixties—captured a Portuguese caravel and a Spanish galleon. Complaints to the Dutch government were met with the bland demurral that Palache, as a Moroccan-sponsored privateer, was a foreign pirate, and, hey, despite his living in Amsterdam and having founded the Jewish community there, he had nothing to do with the Dutch.

That fall a storm forced Palache to land at Plymouth. The Spanish ambassador, Count Gondomar, immediately asked the Privy Council to arrest Palache for piracy. Palache was arrested and charged, but Prince Maurice wrote a letter in support of Palache, King James had Palache put up in the home of the Lord Mayor of London, and Londoners, who loved Palache, made life difficult for Gondomar. At one point Gondomar’s carriage actually collided with Palache’s. Gondomar was stranded, and (quoting a broadsheet) “the passersby considerably enjoyed themselves at the Ambassador’s expense.” The Privy Council dismissed the case against Palache. Quoting Kritzler, “When Gondomar complained that it seemed the English favored Jews over fellow Christians, Caron [the Dutch ambassador] replied there was a reason for this, as the Spaniards did not differentiate between Englishmen and Jews but burned both equally.”

Palache needs to be used by writers, obviously. So, too, Don Manuel Pimental, a.k.a. Isaac Ibn Jakar. Pimental was a friend of Palache and was the wealthiest member of Amsterdam’s Jewish community. The reason? He was a cardsharp, and a really good one. Pimental spent years at the court of King Henry IV of France, relieving the royals (including the King) of their money. After one particularly costly evening, Henry told Pimental, “I am the king of France, but you are the king of gamblers.”
Posted by Jess Nevins at 8:44 AM No comments:

The Walruses of Complacency

In a recent article in the Green Living Tips newsletter, Michael Bloch reflects on the notorious flaws in BP’s emergency response plan for the ruptured oil well in the Gulf of Mexico. Apparently the plan was more of a cut-paste-and-print job than robust contingency planning. Nobody reviewed it well enough to catch the part about oil spill impact on walruses. “While these walruses would certainly be a wonderful tourist attraction, you probably haven’t heard of their presence in the region as it appears they haven’t been in the Gulf of Mexico for 3 million years,” Bloch writes. Evidently material was cribbed from a similar document for a different part of the world. The plan also included the emergency contact number of a marine biologist who died five years ago.

BP has a lot to answer for, but there’s plenty of fault to go around. The document in question had much in common (including the walruses and the deceased scientist) with several other oil companies’ Gulf of Mexico emergency response plans. Neither these companies nor the government’s oversight agency, the MMS, took the possibility of a catastrophic oil spill seriously. The insatiable American appetite for resources and wealth is implicated too. Bloch concludes, “BP’s mess in some ways is an oil spattered reflection of us all.”
Posted by Alexis Glynn Latner at 4:24 PM No comments: