The Sport of Sports 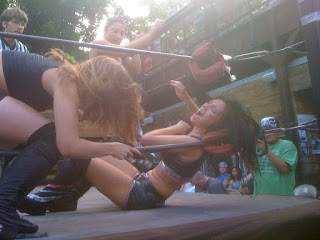 So. Professional wrestling. . . . Last night I went to a indy show, pro wrestling being one of those things you can be surprised still exists except to the subgroup that really loves it. But a show about 10 minutes away from my house? Sure, why not?

Anyway, a local downtown venue, the Mohawk, for this Anarchy Championship Wrestling tilt. Set outside, probably 200 people there all told and I got the feeling that lots of them had some tie either to the organization or were friends of the grapplers. $15 got me a ringside seat, which gives you an idea of the semi-pro nature of the exercise. But they had heart and took some way over the top bumps. Call me a mark (aka a dork who believes what he sees in the ring), but in one early women's match, one of the wrestlers got dropped right on her head and was laying still in the ring getting looked at while the announcers directed the crowd's attention elsewhere. When she got up, she was moving slowly and keeping her neck really still.

Up that close, what became evident--to put a namby-pamby thought on it--is that what you've got in each match is two or more people in the ring m 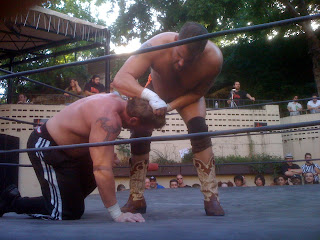 aking up a story together. (This would be the point where we mention pro wrestling isn't really on the up and up). Especially clear when in mid-match you could see the wrestlers whispering directions to one another.

("Remember?" I caught this jobber in a cowboy get-up muttering to his opponent, who gave a little nod as he spun him into the ropes.)

So the matches were one story and I could follow them, but in pro wrestling there are always overarching stories leading up to the next main event and I had no idea about that stuff. I could tell good guy/bad guy but that was about it. 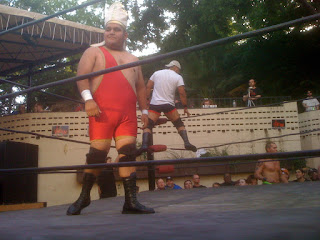 I mean, why is this dude wearing a pope hat? There was something there, and I'm sure everybody else knew what was going on. 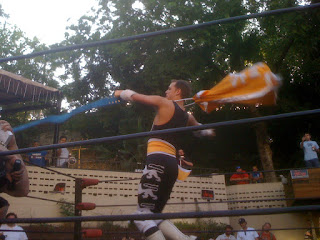 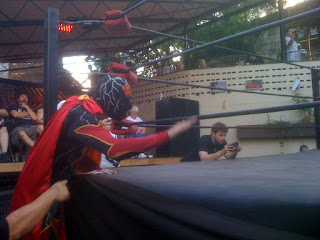 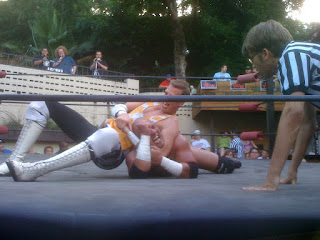 e under 30 champion, claimed to have time traveled from 1985. Wait, what? But they were chanting his name (Robert. Evans. clap clap clap clap clap) the second he came out from backstage.

And he had a mysterious luchador sidekick, which of course, is nothing but awesome. . .


And his opponent's name, to throw a strawberry on top of the 80s nostalgia goodness? Jake Plissken. No wonder the "Starcade '85" chant started halfway during their match--the only chant I joined in the entire time I was there. (Basically every single other chant? "U. R. Gay!" That shit was as constant as the World Cup vuvuzelas.)
Posted by Paul Miles at 7:35 PM 1 comment:

Possible origin for the mad scientist.

The phrase and perhaps the concept, although images of stupid and errant scientists go back well into the 17th century.

Christopher Smart (1722-1771), English poet, wrote a lot of religious verse but was primarily known in his lifetime for his satirical work. In his "Temple of Dullness" (1745) he wrote the following (keep in mind that "Mathesis" is Greek for "science"):

Next to her, mad Mathesis; her feet all bare,
Ungirt, untrimm'd, with loose neglected hair;
No foreign object can her thoughts disjoint;
Reclin'd she sits, and ponders o'er a point
Before her, lo! inscrib'd upon the ground
Strange diagrams th'astonish'd sight confound,
Right lines and curves, with figures square and round.
With these the monster, arrogant and vain,
Boasts that she can all mysteries explain,
And treats the sacred sisters with disdain,
She, when great Newton sought his kindred skies,
Sprung high in air, and strove with him to rise
In vain--the mathematic mob restrains
Her flight, indignant, and on earth detains;
E'er since the captive wretch her brain employs
On trifling trinkets, and on gewgaw toys.
In this poem you've got: the phrase "mad Mathesis" (i.e., "mad science"); a scientist with "loose neglected hair" (and it's de rigueur for mad scientists to have unkempt, wild hair); a scientist "arrogant and vain" (although numerous previous poems had assigned anti-religious scientists these qualities) (Smart is attacking anti-religious scientists here, not scientists as a whole--note his invocation of "great Newton"); and a scientist creating "trifling trinkets" and "gewgaw toys" (not a lot of distance from a mad scientist creating those to creating a death ray).

Not that there was a rush of mad scientist figures in poetry or prose following "The Temple of Dullness," of course, and I'm now wondering if the many French and German novels of the time had something similar to "mad Mathesis." But the phrase "mad scientist" was in use in the 1890s, well before the classic pulp mad scientist, and Smart seems as likely a source for the image and phrase as any other.
Posted by Jess Nevins at 8:34 AM 1 comment:

Another day in the petroleum disaster area

The other day I had the opportunity to to tour one of the world's leading developers of 3-D imaging display technologies. Amid the gorgeous green holograms of Sadr City and the Juarez border crossing was a representative image comprised of geophysical data: an illustration of undersea oil deposits, painted with crisp videogame color, long tendrils of safety yellow pipe weaving through the ocean, down into the sea floor, removing the life force from its subterranean catacombs without going outside the lines of the coloring book. Oil as the magical light at the heart of the island in Lost, heavenly purity of the world before we invented the idea of time.

And then a few days later, ambient CNN in a hotel: the live cam of the Deepwater gusher spewing without end. An infrequent TV watcher, I had not seen this before, this window within the screen in which we get to watch the poison flowing into our eco-system while the talking heads prattle without end about how the gushing will never end until we will have lost our capacity to give a shit, or Energy Secretary Steven Chu goes Strangelove on us and decides to use a nuclear weapon as the suppository of our cultural anus.

(The wellcam image is strangely anatomical, with its weirdly shaped, unrecognizable structures and viscous flows, as if Sanjay Gupta and Anderson Cooper had been miniaturized, sent on Isaac Asimov's Fantastic Voyage, and we were viewing the clotcam inside the President's brain.)

Every morning, my anachronistic front lawn delivery of the ink on pulp New York Times brings a new expanded drawing of the black blob on the map, the bigger outline of the likely underwater reach of the spill, and the still-bigger projection of the places it may yet reach.

And so several times a day, I get to experience that feeling you get when you break something you treasure, in a way that can never really be fixed. Like the feeling you get when you let a child experience something bad they can never forget. When you hurt yourself in a way that can't be healed. Like when the doctor shows you the X-ray with the spot on your lung.

The oil spill is The Blob. The nameless black void that is growing, and we are helpless to stop. The mysterious cloud in space that is eating every planet in its path and the Enterprise is our only hope to stop.

The psychic unsettling of the spill is about more than our lament at the ecological destruction, of animals suffocating in our shit. The spill lays bare the myths and lies of our national narrative with a reality check of undeniable nihilism, like a sitcom interrupted with an emergency broadcast klaxon followed by the grim radar image of the red blob headed your way. The script this is all supposed to follow is the one from Irwin Allen. The disaster movie, in which all our great technocratic MacGuyvers, Charlton Heston as The Architect and George Kennedy as The Engineer, apply American ingenuity and the ethos of the lone frontier hero to save the city, perhaps cleansing some of its sin in the process.

In the past decade, we have had a series of these reality checks in which the elevator pitch of the military-entertainment complex has been pranked by a dour trickster. Hurricane Katrina, in which FEMA's merchant marine Jack Bauers proved totally impotent, the city of New Orleans became a Hobbesian laboratory, and the solitary heroes were the upper middle class dudes from Uptown who could afford to load their families in the Volvo and head to a nice hotel in Houston. The hunt for Osama, now in its ninth year, an action movie that got stuck on a frame somewhere early in the second act. The wars in Iraq and Afghanistan, both mired in the infinite loop of Orwellian forever wars years after they were declared with Hollywood epilogue flourish to have ended in victory. Perhaps even, more recently, the Obama as proto-utopian reformer meme that got him elected, Mr. Smith meets Robert Redford by way of MLK mired down in the same old red team-blue team Coke versus Pepsi partisan farce.

This one takes it to another level, with the technocratic leaders scratching their heads in futility, and all of us at the mercy of the earth-busting adventurers serving the doublespeaking global corporation that owns the well. Every news update suggesting the most recent repair efforts have only compounded the problem.

The psychic impact of this endless flow for those of who live in Texas is profound. Not just because some of us like taking kids fishing in coastal places like Rockport's "Brown & Root Flats." As brilliantly explicated in last year's exhibit by the Center for Land Use Interpretation's Houston branch, Texans live in a place that evolved in the 20th century along the lines best able to support the usually invisible infrastructure of the petrochemical industry: the secret cultural pulmonary system that collects, refines, and distributes the black crack.

Last year I was fortunate to find a small piece of land that has been part of this system. An acre abutting the Lower Colorado River just below an old low water crossing from the Chisholm Trail. The land has never been developed, because it has a petroleum pipeline running through it, one that carried gasoline from Austin to San Antonio. Built in the 1940s and abandoned in the 1980s. I am going to take it out this week, and try to build a house on the property, one that preserves and bioremediates the land. The house design was blogged on Coolhunting yesterday. It uses the trench from the excavated pipeline as the site for the foundation of an earthen use designed to avoid all use of petroleum products, incorporating flora designed to clean the soil and pipes that use the earth as a green heating and cooling system. I like to think this project is a tiny prototype for strategies to rethink and repurpose our relationship with the petrochemical infrastructure in the 21st century.

If the Gulf of Mexico becomes a giant brownfield, is there a rational and holistic design approach that can cure both the environmental and psychic damage? Perhaps, in its science fictional disaster narrative, it can unpack some new cultural response that rewrites the meme.