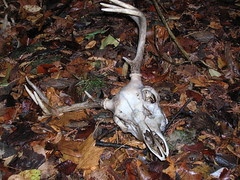 And find some resurrection.

Alexis has it right. The unexpected and incongruous appearances of nature amid the dim din of urbanity give us portals we too rarely look through.

Spring is breaking out with gusto across the Northern Hemisphere. After the long grey dormancy, green nature and frisky wildlife dance across the secret interstitia of the cityscape, providing the perfect antidote to break the postmodern haze for those who can slow down long enough to widen the aperture of their senses and take in the rich light. 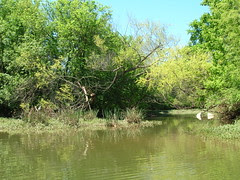 Practitioners of speculative fiction persistently imagine a post-urban future in which mankind's disregard for the environment leaves a vacant tablet of desiccated and silent nature as grey as its abandoned concrete superstructure. The most recent compelling example being Cormac McCarty's The Road, its central character a devastated landscape populated only by nature's ghosts.

Surely these kinds of speculation are just another variation of man's hubris, the anthro-centric notion that we have the power to destroy nature. I think it more likely that, if humanity receded back into the caves of abandoned tenements, nature would rapidly tear down the evidence of human hives, cracking the concrete and healing the wounds of the earth with adaptive genius. My evidence for this supposition is the wonders I see every day in the midst of my own busy metroplex. 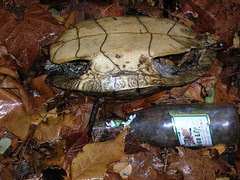 There are the myriad species that in my short life have adapted to human environments and flourished. The turkey vultures that hang glide through the thermal release of hot interstate blacktop and feast on roadkill. The peregrines and hawks that carom off the currents between the skyscrapers and fetch the tiny mammals who live off restaurant trash. The grackle who loiter at streetside cafes and scam their way into free french fries. Alexis' monk parakeets, the descendents of escaped pets who colonize the arc lights over the intramural fields north of my house. 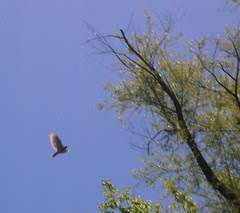 More importantly, every city harbors pockets of wild nature. Most downtowns channel pre-settlement rivers and streams under the concrete skin of the city, like Austin's Little Shoal Creek, or the Hartford River, which eccentric canoeists aquatically spelunk with headlamps, studying graffiti like Neolithic cave paintings. In Austin, covert nature is all over the place. The secret tunnel city of the voles buried in the tall grass under the Loop 1 Mopac freeway. The schools of black tadpoles in the toxin-rich creeks that drain North Austin into the Colorado River. The opossum that scavenge alley trash after dark. The screech owls that greet early-rising writers with alien hoots in the pre-dawn moonlight. And the river itself, where, below the dam, a canopy of tall virgin timber on the banks hosts a fresh array of fauna that has settled in to the latest paradigm. 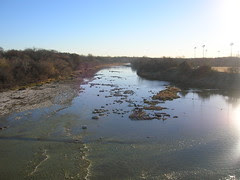 Most of the Lower Colorado, our geographic spine, has been dammed up since the 1930s, producing three riverine "lakes" within the city limits that are more landscaping features than natural environments. But on the other side of the Longhorn Dam that holds in "Town Lake," the Colorado returns to its natural channel, providing a refuge habitat for all sorts of shallow water-feeding birds and river predators. This stretch of the river is pure urban negative space — only a thin stand of trees protects it from dense industrial uses on either side — starting in the middle of the East Austin barrio, passing the mothballed Air Force base that now serves as Austin's spiffy airport, industrial pits, invisible factories, then southeast to Moorcock country. 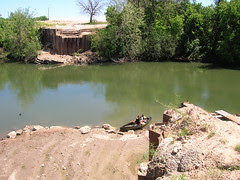 In late spring, the herons and egrets stand in the shallows beneath the dam like predatory supermodels, waiting for the bottom-draining pour-off to deliver the big bass from the cool bottom of the lake. Mexican guys from the neighborhood hang out there too, casting their rods in the deep containment tanks, occasionally producing mutant catfish. 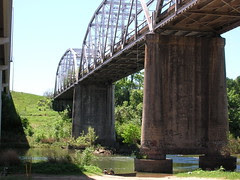 My preferred canoe put-in is under the Montopolis Bridge, a mud parking lot under the shade of transecting freeway overpasses leading to Houston, Bastrop, the Hill Country and the Airport, a popular neighborhood beer drinking, wading, and water spraying off-roading spot, where the Cub Scout finds used hypodermic syringes from time to time. At the edge of the lot there is a battered sign marking the area as the "Colorado River Preserve." 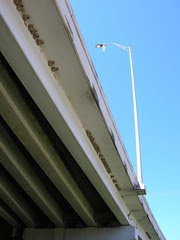 On the shaded exterior right angles of the concrete overpasses, huge colonies of cliff swallows have built their condomiums of mud and spit, feasting at dusk on the big bugs that swarm the arc lights. 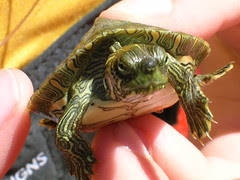 Downriver, it is a world of wild green. Secret lagoons full of turtles the size of tennis rackets, baking themselves on little islands of dumped concrete, the young displaying their fresh canvases of nature's body art. An osprey flies low, a white Stuka dappled in dark muddy browns, carrying a dripping freshkill rat in its talons. Further down, a pair of osprey work on making eggs in one of the tall trees. 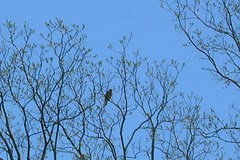 It's their world, we're just living in it.
Posted by Christopher Brown at 4:27 PM

This is something out of a J.G. Ballard novel - the ceaseless 'river of time' (of nature) which renders the temporary concrete and steel follies of humanity unto so much dust and useless memory..