Have yourself a very Banksy Christmas 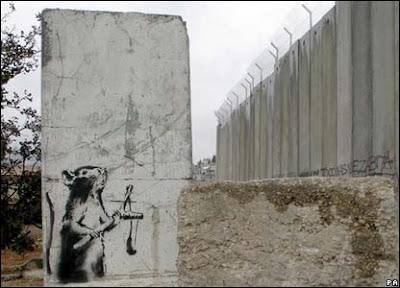 While your local city elders are busy hanging chintz over Main Street,Banksy just hit Bethlehem and spray painted The Wall for your holiday viewing enjoyment. When is he coming to Washington?

'Bethlehem banks on Banksy to boost tourism'
posted by Rob Maguire on December 3, 2007

'In a creative bid to boost Bethlehem's sagging economy, Banksy has brought his seasonal "Santa's Ghetto" exhibition to this Palestinian town that has seen few tourists in recent years.

'The infamous stencil artist joined several others in creating over a dozen works on the concrete wall surrounding the town, turning a hated symbol of Israeli occupation into an massive open air art gallery. Another dozen or so works are on display in a former chicken shop in Manger Square.

'In more peaceful years more than 100,000 tourists would pour into Bethlehem during the holidays. Last year the town saw a mere tenth of the traffic. Having visited Bethlehem in December a few years back I can personally attest to the recent drought of visitors. With over 70 percent of the workforce depending on tourism, signs of a wounded economy are everywhere.

'“You wouldn’t worry about Christmas becoming too commercial in Bethlehem – they couldn’t afford it. There’s more festive lights in the window of your local Woolworths than you’ll find in this entire town,” Banksy told The London Times. “It would do good if more people came to see the situation here for themselves. If it is safe enough for a bunch of sissy artists then it’s safe enough for anyone.”' 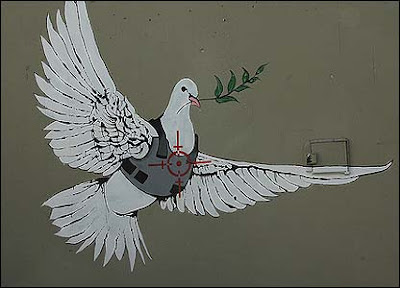 Posted by Christopher Brown at 9:03 PM

I am looking to sell some of my Banksy collection - Di-Faced Tenners.

They are in perfect condition (mint) and I have kept them in an acid free folder and my house is smoke free.

For a photo please see here :

I accept payment by PayPal or bank transfer to my UK bank.