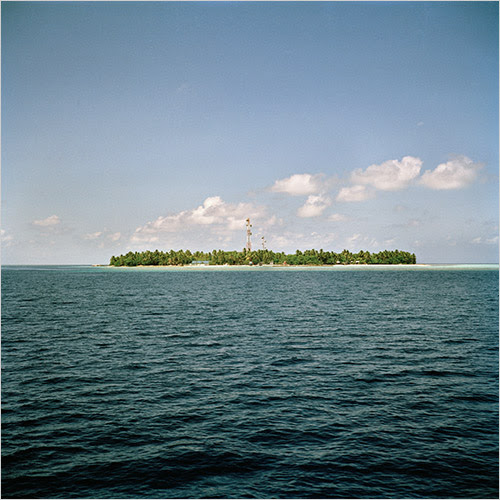 Today's NYT Sunday Magazine has an amazing piece about the efforts of the new president of the Maldives to find a place for his country to relocate in light of global warming and the imminent submergence of their archipelago:

The Maldives is an archipelago of 1,190 islands in the Indian Ocean, with an average elevation of four feet. Even a slight rise in global sea levels, which many scientists predict will occur by the end of this century, could submerge most of the Maldives. Last November, when Nasheed proposed moving all 300,000 Maldivians to safer territory, he named India, Sri Lanka and Australia as possible destinations and described a plan that would use tourism revenues from the present to establish a sovereign wealth fund with which he could buy a new country — or at least part of one — in the future. “We can do nothing to stop climate change on our own, and so we have to buy land elsewhere,” Nasheed said in November.

Downright Sterlingian. The idea of an entire island nation relocating is a fascinating 21st century possibility about which to speculate. What are some plausible scenarios?

- The Sri Lankan government moves them as resettlers into Tamil territory cleared out in the recent conflicts, trading Sunni for well-armed secessionist Hindi.

- Some Fosters-drunk Australian mayor sells off a freshly annexed part of his dusty town, funding a new city hall-cum-casino.

- An area of bankrupt coastal Iceland is repurposed for these Indian Oceaners, reforestered with aluminum palm trees like the one in JG Ballard's living room.

- Narco-torn regions of the Texas-Mexico border are ceded by both governments, to create a new kinder gentler post-Juarez fully of happy buffer people, who transform the Rio Grande slums of Juarez and Nuevo Laredo into umbrella-drink vacation destinations.

- An abandoned amusement park in a run-down American city, maybe even a section of Disneyland Anaheim, is transformed into Maldive-land.

- The first human colony on the Moon is a city of a quarter-million Maldivians, who build giant greenhouse seas stocked with transplanted game fro the Indian Ocean.

- The Maldivians, unable to secure new territory, purchase a fleet of 30 gigantic Carnival-style cruise ships, each with a capacity of 10,000 passengers, roaming the world as the ultimate 21st century neo-nomads. They fund their fuel and food costs with a series of reality sequels to The Love Boat, with run-down celebrities selling their love and attention to the visiting civilian contestants — actual cruise passengers — the viewing audience, and the occasional U.N. observer.
Posted by Christopher Brown at 10:18 PM