Courtesy of Ballardian's Simon Sellars, an amazing collection of the world's best celebrity versus paparazzi smackdowns via Oz's thevine.com.au. See THX-1138 bald Britney smash the windows of an SUV with her umbrella! See Matthew McConaughey and his Malibu surfer posse going all Jets and Sharks on the photogs! Feel the unleashed Njalster tantrum fury of Björk! This is your reality.

If that's not enough, try this speculative version of celebrity culture jamming in my story R.P.M., courtesy of the fine fellas over at Futurismic, in which near-future revolutionaries take paparazzi tactics to the next level by creating intentional accidents with movie stars and dutifully documenting the results:

Seven long seconds across the yellow line, four overpowered bald tires balanced on the edge of totally out of control.

The windshield fills with white as the Monte Carlo punctures the left drivers’ side door and rear quarter panel. Elegant forms of sheet metal assembled with attentive precision by North America’s most diligent factory robots krush, crumpled like the aluminum foil of the Gods. The busted hymen of new car virginity rended in an act of loving violation.

“To free the world, we must rape the Spectacle,” says Avineri in the Prison Blog.

Tinted windows shatter and blow, exposing Jessica as she screams, the secret sphincters of her facial muscles contorting her pampered dermis into a horrifying rictus a hundred times over, once for each of the dilating shutters excitedly popping off in her face—our half-dozen cameras and those of the true paparazzi excitedly seizing upon the sudden scene.

The best of our photos and video clips will be posted on one of 0z0’s myriad websites that bounce from host to host as the cybercrime brigades hound the ISPs. The straight paparazzi images will end up in checkout counters and dinnertime television broadcasts. Percy usually manages to sell a few of our choicest illegally procured spots to the same outlets, financing our future efforts with the fruits of our transgression. The best of the celebrity accident photos will go for a few thousand bucks; clean video can reap five figures.

“Our home invasions are legitimate, virtual, and totally commercial,” says 0z0 in his manifesto-in-progress. “We merely insert a slow-burning virus into the mediascape to hasten its self-immolation. No one makes you watch, right?”

See also: Invisible Literature for the Age of Celebrity: The Assassination Inquest of Diana, Princess of Wales Considered as an Unintentionally Ballardian Remix of the Warren Commission Report. 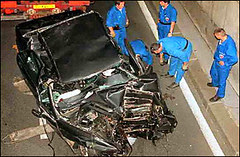 Posted by Christopher Brown at 8:57 PM