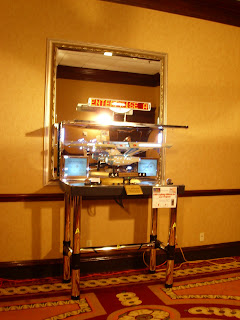 Last weekend I got lucky and was able to go to FenCon in Dallas on short notice. I had a great time: it was a well-run convention with all kinds of special stuff – some of it orchestrated and some just serendipity. During one panel I was charmed to hear the original Star Trek theme music wafting from the video room across the way. When I watched and loved Star Trek as a kid, I never imagined (a) SF conventions – they existed, but I never heard of such until I went to college, (b) Star Trek conventions – ditto, (c) recording media that let you own and show, whenever you want it for yourself (or for a convention), episodes of that show. Or (d) LED's brilliantly integrated into scale models of the USS Enterprise. In my childhood bedroom I had a painstakingly assembled model Enterprise hanging from the overhead light. Who knew there would one day be tiny, intense lights in all colors on Christmas trees and in models? A main hallway on Saturday at FenCon had this Enterprise, amazingly graced with lights, courtesy of a group called Building Ultimate Models. It was a thing of beauty and much admired by everyone who saw it.
Posted by Alexis Glynn Latner at 11:35 AM