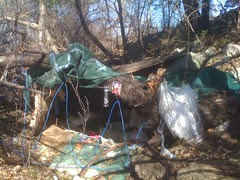 Courtesy of the awesome team at Strange Horizons, I have a new story up today about hand-knit his and hers sensory deprivation hoods, golf course detention camps, strip small suicide bombers, improvised homeless shelters, and other flotsam of the Zeitgeist bobbing around in our collective consciousness. "Nomadology" — check it out:

What a fucking awesome party. Talk about "obscene enjoyment." Who knew the mujahideen assassins would have even better reefer than those Scythian priests camped out on top of the parking garage doing their blood bowls? The whole thing was like a post-apocalyptic Cheech and Chong flick.

Osama opened up his Blofeldian mountain hideout for a house party. The place was shaking with woofed-up synthesized Fezcore running through the rebar. You were kind of spaced out, writing rhymeless poems in your bad calligraphy on the fuselages of the anti-aircraft missiles arrayed for launch. I got lost in the rave Abu Ghraib downstairs, with all the Dionysian Abercrombie POWs acting out their skankiest warporn fantasies. "Frat boys are so much better when they are on leashes," you said. I came looking for the tough-loving Lynndie England of my private midnights, and instead I found you. Who knew a latex Barbara Bush mask could be so fucking hot?

Liberian teenagers toting AK-47s haul ass down the David Addington Allée in an overloaded Lincoln Navigator with the top sawed off, dragging the bodies of a well-regarded architect and your vice president of marketing behind the car. You tell me to throw something at them, but come on, you know what a chickenshit I really am. I could lose my job.
Posted by Christopher Brown at 8:05 AM

You are in top form as always. I'm glad I read that after my afternoon walk. I don't really feel safe outside my cube now...