Arrr, mateys, that be trayf!


Edward Kritzler’s Jewish Pirates of the Caribbean is a fun read—well-documented but not scholarly, fast-moving and well-told. Yes, some of the pirates were Chosen, and some of these Chosen…well, let’s take a look at Samuel Palache, shall we?

To quote Kritzler, “he was a giant—merchant, pirate, conspirator, rabbi, ambassador, and founder of Amsterdam’s Jewish community.” No friend of Spain (for reasons obvious if you know anything of the history of Spain and the Jews), he took great pleasure in taking their ships. Palache regularly ran guns and munitions to the corsairs in Morocco in exchange for Spanish booty. In the spring of 1614, when Palache was in his sixties, he borrowed five thousand florins from the Dutch government (with a surety from Palache’s personal friend, Maurice of Nassau, the Prince of Orange) and equipped two ships, crewed almost entirely by former pirates.

Palache sailed to Morocco and got a privateer’s license. (Sidan, the ruler of Morocco, had been forced to kill his brother, who led a Spain-backed rebellion of radical Muslims, so Sidan had no love for Spain). Palache raised the black flag and set sail. Again quoting Kritzler, “carved on the bow of his ship was a phoenix, a mythical bird that lives a thousand years, is consumed by fire, and rises afresh from the ashes. It was his way of saying that Inquisition flames might burn individual Jews, but could not destroy their ancestral faith.” Naturally, Palache, as a Rabbi, took care to make sure his ship followed Halakhah, and employed a Jewish chef to prepare kosher meals. 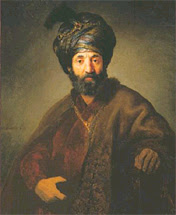 Palache—remember, in his sixties—captured a Portuguese caravel and a Spanish galleon. Complaints to the Dutch government were met with the bland demurral that Palache, as a Moroccan-sponsored privateer, was a foreign pirate, and, hey, despite his living in Amsterdam and having founded the Jewish community there, he had nothing to do with the Dutch.

That fall a storm forced Palache to land at Plymouth. The Spanish ambassador, Count Gondomar, immediately asked the Privy Council to arrest Palache for piracy. Palache was arrested and charged, but Prince Maurice wrote a letter in support of Palache, King James had Palache put up in the home of the Lord Mayor of London, and Londoners, who loved Palache, made life difficult for Gondomar. At one point Gondomar’s carriage actually collided with Palache’s. Gondomar was stranded, and (quoting a broadsheet) “the passersby considerably enjoyed themselves at the Ambassador’s expense.” The Privy Council dismissed the case against Palache. Quoting Kritzler, “When Gondomar complained that it seemed the English favored Jews over fellow Christians, Caron [the Dutch ambassador] replied there was a reason for this, as the Spaniards did not differentiate between Englishmen and Jews but burned both equally.”

Palache needs to be used by writers, obviously. So, too, Don Manuel Pimental, a.k.a. Isaac Ibn Jakar. Pimental was a friend of Palache and was the wealthiest member of Amsterdam’s Jewish community. The reason? He was a cardsharp, and a really good one. Pimental spent years at the court of King Henry IV of France, relieving the royals (including the King) of their money. After one particularly costly evening, Henry told Pimental, “I am the king of France, but you are the king of gamblers.”
Posted by Jess Nevins at 8:44 AM