In my last entry I posted an obituary of "George Boynton," a 19th century mercenary. The following isn't, strictly speaking, about a mercenary so much as an adventurer and sometime-Africa hand. But in the 19th and even early 20th century the distance between those professions wasn't as big as you might expect. Too often, the obituaries of these men are mild, if not as laudatory as the encomiums Boynton received. Depending on who is doing the writing, the obituaries might actually touch upon the sordid realities of what these people actually did. Only very occasionally will you find an obituary which is as damning as the subject truly deserves--like the following, which is probably originally from an English paper but which I found in the Singapore Straits Times of 15 November 1918:

GERMAN FILIBUSTER OF THE WORST SORT 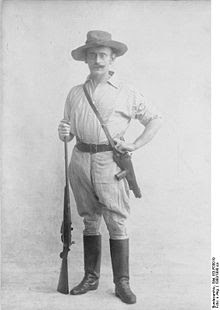 It is not too much to say that the German African colonies owed their existence to the work of Karl Peters. In East Africa he was the pioneer, the inventor of the scheme, the force which inspired its realisation. No man did so much as he to stimulate German greed for other districts of the continent, for, eminent as a filibuster, he had even greater talents for advertisement and propaganda adapted to the German temperament. It happens by an odd chance that the man's career is as it were a distillation of the qualities which have made Germany's colonial policy infamous. Be avowed, he boasted, that in dealing with African territory and its inhabitants he had no other motive than to extract the utmost possible profit. Take his own words as evidence: "The English Government," he said, "pampers the blacks to such an extent as to make the country impossible for the whites...To me the most advantageous system seems to be the one in which the negro is forced, following the example laid down by Prussian military law, to devote some twelve years of his life to working for the Government. During this time he should receive food and shelter and a wage, say, about 2s. a month, like the Prussian soldier." To obtain opportunities for this policy he employed in dealing with Europeans every artifice of treachery, and exhausted upon the native population the resources of a mind morbidly fertile in cruelty. With the evidence which later years have brought to light before us it cannot fairly be said that Peters was a more infamous scoundrel than some other German administrators in Africa, but his crimes were too disgusting for the saner section of German opinion, and following the majority of the Reichstag we may allow him a certain eminence in villainy. His character is not difficult to understand. What led him to his dubious fame was a ferocious pugnacity and driving power. He had the nature of one of the old buccaneers, complicated, so much the worse for him, by Prussian militarism, by sham philosophy, and, worst of all, by the economics of the alliance of Junker and industrial magnate which dominates modern Germany. He was a brave man and of tireless energy. He had a large endowment of cunning. But of power, of thought, foresight, or sure insight, in spite of some pretentious books and much posing, he showed no trace.

Karl Peters was born at Nauhaus, in Hanover, in 1856, the son of a Lutheran pastor. "Clever, but headstrong and unruly," was the verdict of his schoolmaster. He studied at Götingen, Tübingen, and Berlin, with some distinction, and a reputation for impetuosity. A visit to England, according to his own story, set him thinking of colonial expansion. He came back to Germany in 1884, when Kolonialsch wärmerei was the fashion. He founded the Gesellschaft fur Deutsche Kolonisation, with himself as the manager, and soon after set out for East Africa. He spent six weeks on the mainland, rushing from chieftain to chieftain, making treaties with them, and taking them under the protection of Germany. Germany, then guided by the sane statecraft of Bismarck, was not excessively grateful, but the treaties were at length ratified, and a protectorate proclaimed. Peters proceeded to organise and finance the German East Africa Company.

His next exploit was to lead an expedition for the relief of Emin Pasha, from which he promised his country, not only glory, but hard cash, in the shape of new colonies to exploit. When he arrived off the coast of East Africa Admiral Fremantle confiscated his firearms as contraband. Berlin, still Bismarckian, "refused all mediation and support." Peters got together a force of Somalis, and plunged into the interior. What he understood by exploration is explained by a statement made by Scavenius, the Danish traveler:


In the year 1894 I undertook an expedition with three boats and eighteen blacks up the River Tana. A few years before, Dr. Peters had made practically the same journey, on the occasion of his well-known expedition in search of Emin Pasha. No Europeans had in the meantime been through this desolate region. When I had rowed some 200 kilometres up-stream the population began to retire. On every side I came across traces of war. In the neighborhood of Obangi I found eleven villages that had been destroyed by fire, and everywhere skeletons of men, women, and children, those of the women and children being especially numerous. It was almost impossible for me to procure the necessary rice for my people, for as soon as we approached the whole populace fled panic-stricken. The natives were terrified at my white face, for the last white man they had seen was Dr. Peters.

By the time the expedition approached the Equatorial Province, Stanley had already relieved Emin, and therefore was subsequently vilified by Peters with every charge that a fertile invention could suggest. Peters turned off to Uganda, and tried to win it away from England, but on the news of an English expedition to arrest him he fled back to the coast. Bismarck's attitude to these adventures was never in doubt. The English, he said, might hang Peters for all he cared. But by the time Peters reached Berlin Bismarck was in retirement, and the Kaiser had taken control. Peters became his hero, to be received in special audience and imperially thanked, honoured, and entertained. In 1891 he went back to Africa as Imperial High Commissioner of the Kilimanjaro district. Soon the whole region was in revolt, some of the German garrison were killed, and a compulsory evacuation of the whole area followed. An inquiry into Peters' conduct by the Governor of the Province pronounced him "censurable but not criminal."

He came back to Germany in 1893, and posed as a martyr to political rancour. The hero of German colonisation, the champion of Pan-Germanism in action must be defended against the adherents of Bismarck, the anti-Colonial party, and the Social-Democrats. It is plain that a fight between the Pan Germans and the saner men in high places raged over the corpse of his reputation. He was given a good pension, he was offered an important post in East Africa. The wind changed and the Colonial Office held a new inquiry into his actions. But no report was published, and he saw himself again safe on the road to the highest place. Then the Centre party and the Socialists were mobilised against him, and Bebel delivered a smashing indictment before the Reichstag. The worst charges were briefly that Peters kept a harem of black women, that he hanged without trail a native boy whom he accused of intimacy with them, that he pursued women who had fled from him to their own tribes, and that one of them at least on recapture was flogged daily, put in chains, and on a second escape and recapture hanged. It is fair to say that the Reichstag was roused to clamorous indignation, but as the substance of the charges had long been known to everybody we may wonder why they were suddenly found so exciting. The result was that Peters was deprived of his commission for "misuse of official power." As it was restored to him in 1906 there is no escape from the conclusion that whatever Socialists or Catholics may think the Government of Germany regarded Karl Peters as a fit and proper person to represent its colonial policy. As usual, no one can state the case against Germany with more force than her own rulers.

Of late years Peters sought fresh fame as an exponent of the wildest dreams of Pan-Germanism, crying aloud for the defeat of England "at the Suez Canal and in Egypt, and if possible in India." To the last he was treated by all parties as a man whose opinions must be treated as significant and important, a curious commentary on the German capacity for political thought.

I had a few reactions to reading the preceding. (BTW, for a more objective treatment of Peters' life, there's a somewhat lengthy Wikipedia article). Setting aside the inevitable smugness at being Our Enlightened Selves, we can still feel loathing for Peters. Clearly, not a good person.

On the other hand...Peters died in September, 1918, and the obituary probably originally appeared in October, while World War One was still going on. In all likelihood a significant amount of the venom directed towards Peters comes from British jingoism rather than from a genuine loathing for what white colonialists did to Africans. That British colonial officers were only little better than the Germans is, we know now, a fact, but something the British of 1918 would not have believed and would not have been able to admit to themselves. Even in the 1930s British writers like Edgar Wallace could pen colonialist fantasies about moral British Africa Hands who would never dream of engaging in the sort of behavior Peters did. (I love Wallace's Sanders stories. I think they are exceptionally good for pulp adventure. But I have to hold my nose while reading them).

I'm sure someone will enlighten me as to why Germany under Bismarck would have been seen as so superior to Germany under the Kaiser. Yes, sure, he was seen as a moderate and as someone interested in a peaceful balance of power, but there was plenty of anti-German rhetoric from the Brits during Bismarck's lifetime. Perhaps it's as simple as the British of 1918 realizing how good they had it, relatively speaking, under Bismarck and knowing that they didn't know it during Bismarck's life.
Posted by Jess Nevins at 11:45 AM

I'm not sure Peters' mission to Emin Pasha was much worse than Stanley's parallel effort from the Congo. Both had the same object of advancing the ulterior motives of European powers, Stanley for Belgium & Peters for Germany.

The British liked to pose as far, far above such beastliness as the Belgians & Germans practiced. Sometimes they were, but not as far as they claimed I think.