The Untapped Potential of Hindploitation.

It's a scenario familiar from many a blaxploitation and 1970s martial arts film: the African-American dojo in New York or Los Angeles, turning out black martial artists who fight for their neighborhoods against brutal and corrupt white cops and an uncaring white society. Those of us who grew up in the 1970s or have seen a lot of the films of that era know the premise well. In its way, it's almost iconic.

And the thing to do with icons, once they've grown over-familiar, is to re-invigorate them by placing them in a new context, or change the trappings while keeping the essentials.

You may or may not know this, but the victory of Japan in the Russo-Japanese War of 1904-1905 was seen by many colonial subjects as a signal blow against the white colonial countries. It was the first decisive defeat of a European country by an Asian power and helped bring about the "moment of departure" in the thinking of colonial nationalists, as well as reversed the Orientalist stereotypes in the minds of those same men and women.

In India, the Japanese victories were widely discussed, with Nehru crediting them for filling his mind with nationalist ideas, Gandhi urging South African Indians to "emulate...the example of Japan," and Tagore crediting Japan with having "infused hope" in the East. But many Indians saw the triumph of Japan as a further indication of how low India had fallen. The Daily Hitavadi of Calcutta wrote, "Is a chained dog to imitate a lion at large? The difference between Japan and India is the difference between heaven and earth."

Some Indians decided that what India needed was to imitate Japanese ways. In 1906, in Calcutta, Sarala Devi Ghoshal opened a martial arts academy in Calcutta for the purpose of teaching Bengali youth "how to use the staff, the fist, the sword, and the gun." Her focus was on jujitsu and fencing. She taught jujitsu, and for fencing she imported Professor Murtaza, a Turkish fencing master.

Ms. Ghoshal, as it happens, was a Person Of Interest to British Intelligence in India at this time. The granddaughter of religious leader Debendranath Tagore, Ghoshal was a disciple of Shiv Narayan Swami, a fugitive from the 1857 Rebellion and an instructor of a lathi-based fighting form. One of Ghoshal's fellow disciples was M.N. Roy, a revolutionary nationalist and "political dacoit" (gods, I love that phrase) who during WW1 tried to link up with the Germans and was a Communist agent in the 1920s until he broke with Moscow in 1929 and denounced Communism in 1930. Ghoshal herself founded a school for physical culture in Calcutta in 1902--you'll recall my speech on physical culture at this time and its association with superhumans--and her martial arts academy spawned a number of imitators in Calcutta and its suburbs.

You all see the potential here, right? Think what a splendid film it would make! (Or rpg or novel, etc).

Of course, Indian cinema has never been particularly good at making martial arts films. Even things like Sultan the Warrior (see Matthew Bey's piece here) are not up to the level of American or Thai actioners, to say nothing of Chinese or Japanese films. So perhaps an Indian take on Ms. Ghoshal's martial arts academy would not be for the best. 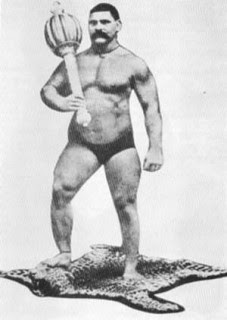 But there is one Indian subject that an Indian or Pakistani needs to film and would do an excellent job at: Ghulam Muhammad, a.k.a. The Great Gama, a.k.a. the greatest wrestler there ever was.

Gama's Wikipedia page adequately covers the basics: Punjabi, c. 1882-1953, took on all comers internationally, never lost. He was a Pehlwani wrestler, which partially explains his ability--their training regimen in Gama's lifetime was on par with Muay Thai practitioners' in its brutality. (A little more on Gama's punishing daily workout routine here.)

But the Wiki page doesn't really cover is how terrifyingly strong Gama was, how seemingly insensible to pain, and especially how excruciating his submission holds were. Contemporary accounts make him sound like a cross between Gilgamesh and a tidal wave: something to be avoided or submitted to, but certainly not resisted. Numerous big-name wrestlers--and, remember, this was a time when wrestling was a legitimate sport, not Wrasslin', a.k.a. soap opera for men--simply refused to fight him for fear of being humiliated. This was especially so of British & European wrestlers. (Interestingly, while there was some racism in their responses to Gama, for the most part their fear of him didn't spring from

Sure, an American (ugh) might be able to make an entertaining Gama film, but it'd be the usual exploitive and semi-racist garbage Hollywood usually turns out when it addresses a non-white culture in the past. For something like this, I'd rather see an Indian or Pakistani make the film. You'd get historical accuracy and a sensitivity to the subject matter. A serious treatment would be best--I'm thinking Lagaan, but with wrestling--but something that used Ms. Ghoshal's martial arts academy and had Gama, Ghoshal, and her students fighting the soldiers of the Raj in something like Once Upon A Time in China IV would be as entertaining and even more fun.

It's true, Bollywood fight choreography sucks. Only the BBC is consistently worse.

But I bet that Salman Khan has the physique to play the Great Gama. Team him up with Ram Gopal Varma and you've got yourself a sports epic.

Bollywood has turned out some decent action/suspense stuff, though I admit your mileage may vary. Check out Sholay or Sarkar.

OK, I'm an Amitabh fan. But those ARE good movies...

Dave--I like Indian action and suspense films just fine. It's their *martial arts* films, and their fight choreography in general, that are lacking in comparison to Chinese and Japanese and Thai and, sadly, even American products.

Fair enough, Jess. Sarkar wasn't an action film and Sholay was more of a shoot-'em-up than a punch-'em-out.

To be honest, I had a hard time getting past the musical numbers in Sholay. The shoot outs were pretty gripping though.

It's interesting stuff & I've only dipped my toe in the vast ocean of Bollywood.

Actually, now that I think of it, Shahrukh Khan isn't half bad at the kung fu. He picked up some wushu for the Don remake and the fight scenes from Asoka weren't bad at all, considering that it's a movie about the guy who inspired Gandhi's non-violence philosophy.
http://www.youtube.com/watch?v=86ApwObomBA