Walking Through Walls—Borders and the Future (part 1 of 2) 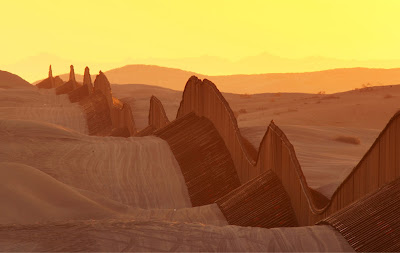 Following up on my post about my recent kidnapping by the Tijuana Liberation Front, I have been asked to release my hostage video, in the form of a transcript of the remarks I gave April 29 at the Border Crossing Lectures in Tijuana put on by the media studies faculty of the Autonomous University of Baja California and the Tijuana Cultural Center. Included are some of the slides that were visible to the lines of cars watching the talk as they crossed the border, as well as some web annotations. I plan to post the piece in two parts, today and tomorrow.

The speech preceded a screening of the Alex Rivera cyberpunk film Sleep Dealer, and tried to provide some context for thinking about the possibilities and futures revealed by that outstanding work.

In Alex Rivera’s Sleep Dealer, Jacob Vargas plays Rudy Ramirez: a Mexican-American drone pilot who protects American corporate assets in Mexico from damage by the locals. Rudy is a clever variation on an interesting archetype in the American popular narrative: the Spanish-speaking immigrant who becomes an American soldier, often recruited by the special forces as a talented double agent to infiltrate his homeland. Unlike his predecessors—like Tom Clancy’s Cartel-buster Ding Chavez, Richard Nixon’s Cuban “plumbers,” the fascist future-yuppie Argentines of Robert Heinlein’s Starship Troopers, maybe even Dick Cheney’s pet Iraqi Ahmad Chalabi—Rudy Ramirez starts to question the reality and semiotics of the border, and the power structures it represents. 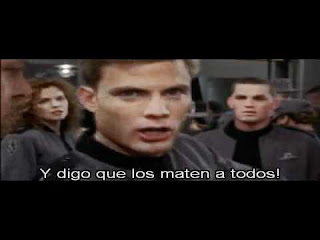 In a movie about borders, Rudy is the only character who crosses one. And he goes the wrong way! Or at least his culture tells him that, in the voice of the cyclopean robot fortification of future San Ysidro. Who leaves the shiny order of utopia for the dusty chaos of dystopia? Might there be a reason why the border wall is so much more intimidating from the US side than the Mexican side? The gate at the end of a metallic tunnel, guarded by a robotic combination surveillance camera, retinal scanner and machine gun—that plays Muzak while it decides whether or not to shoot you—conveys its true purpose very clearly, like the iron fences of a suburban gated community: to keep people *in.* The light that shines through the gate as Rudy crosses over signals that, in his search for Memo, the innocent hacker Rudy has wronged in his unthinking acceptance of his own culture’s narrative, Rudy is really seeking his *own* liberation. 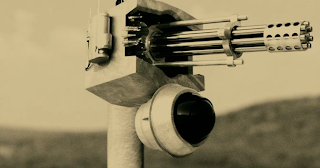 The surveillance is greatest at the border because, on the other side, there is no surveillance—at least from the culture of your origin. No surveillance by your State, no extension of the omnipresent eye of social class, no more semiotic definition by the advertising industry’s chosen cultural referents. Borders are where we go to escape the eyes of our own society. 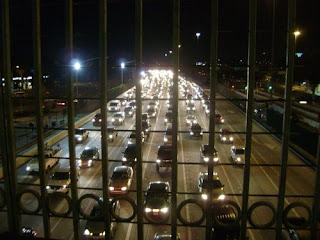 Watching Rudy Ramirez in this film, you realize that the prototypical Mexican border crosser in American genre cinema is an alien hunter: a representative of American property chasing criminals, revolutionaries, or stolen property. And that what they are really seeking is not the completion of their mission, but their desire for freedom from the alienating confines of their own society. The Texans in the Western are always chasing a killer, or Comanches, or Villa, but when they go over it is also their *own* escape to freedom—sometimes the hedonistic freedom of Prohibition-era Juarez; sometimes the freedom to fully express primitive instincts of profound violence, as in Cormac McCarthy’s Blood Meridian; sometimes even the freedom to try to create a better community. 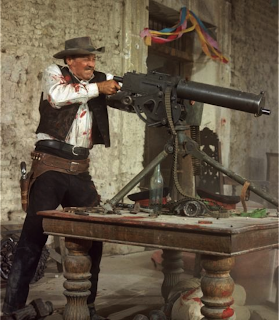 The armed Americans crossing the border are all like the Sandmen of Michael Anderson’s 1976 film Logan’s Run—the policemen inside a giant shopping mall city of the future who enforce the law of the computer that runs the society: preventing “runners” from evading the rules that sustain the society’s orderly luxury. When Sandman Logan-7 is sent outside the walls as an undercover runner, the odyssey leads him through a series of conflicts with the technology that controls him, and finally free to the green ruins of Washington, D.C., where he and his mini-skirted concubine find themselves a new Adam and Eve inheriting an entire continent of liberated territory. The American dream, renewed!

Of course, the reality of crossing over—either way—rarely works out that way. Causing one to ask: do you really need to cross the border to escape its confines? Might we find the liberated territory in our minds by more thoroughly interrogating the representational territory of the border? There are many entry points to the Interzone, and even more exits—sometimes through borders that disappear overnight. 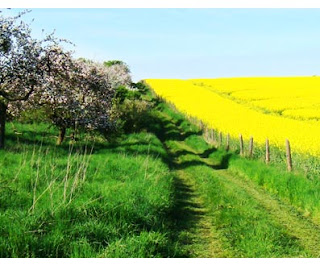 When the Soviet Union collapsed in 1989, the elaborate series of border fortifications that physically expressed the “Iron Curtain” was dismantled. The walls and fences and no man’s lands that bisected Europe from Finland to Albania, including the German wall that divided two parts of the same country in half, were torn down. Like pulling a piece of tape off a painted surface long faded, the removal of the Iron Curtain revealed a weirdly preserved zone: border wall as accidental wildlife refuge. European conservationists have since made substantial progress in transforming the zone of the Iron Curtain into the “European Green Belt,” an ecological network of parks and reserves running from the Barents to the Black Sea. 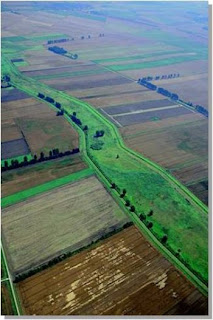 Borders like the Iron Curtain and the US-Mexico line create edgelands: the blurred spaces between different land uses and territories that can be occupied by the invisible, the accidental, and the unofficial. The English poets Paul Farley and Michael Symmons Roberts invented the term “edgelands” for their 2011 book of the same name, as a way to describe the unnamed transitional zones created where urban development meets open land. Farley and Roberts focus on the exploration of edgelands in the interior of their own country, as “England’s True Wilderness.” By giving a name to these invisible places that exist at the margins of all of our cities, they provide the rest of us a vocabulary to use to be able to *see* these places. 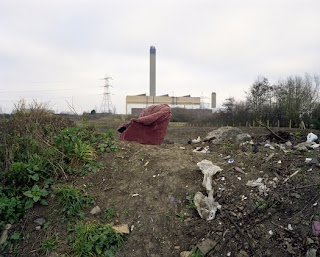 Edgelands represent the potential for liberated territory. The slivers of open land between jurisdictions and uses is often territory that cannot be occupied under the existing legal regime. Because it is environmentally delicate, or toxic, or a floodplain, or a failed business project trapped in development limbo, or quarantined paramilitary space such as the California border zone. Edgelands therefore become natural targets for habitation by edge-people—people without real property, without real legal identities. In the interior of the United States, a careful observer can find the improvised edgeland homes of the invisible people the society barely recognizes. In my town of Austin, Texas, I have found an earthen dome tent built from found materials in the shadow of a radio antenna along a busy street, a clan of Burmese fishermen living in an abandoned shack on a stretch of the Colorado River near the airport, a cave of fallen branches beside a stretch of railroad track running through downtown, protected with neon string, a plastic toy light saber, and a picture of Santa Claus. Edgelands are where we go to find refugees, favelas, commerce outside the law, and wild nature spliced in to human space. 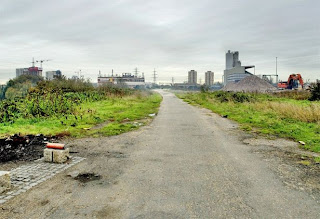 The occupation of edgelands—by people, dwellings, business—gives tangible reality to the invisible world unacknowledged by the official systems of the State. The Peruvian economist and economic development proponent Hernando de Soto argues that the key tool for accelerating economic growth in “developing countries” is the conveyance of enforceable legal title to outlaw homes and unincorporated black market businesses. De Soto’s study of Egypt noted that 80% of the public housing did not officially exist: unrecorded residents had constructed several additional floors onto most of the public apartment complexes. In Latin America, de Soto observes that most small business activity is so small and informal as to exist entirely outside of the system: the State cannot track the activity, and the business-person cannot enforce their rights as an “owner.” Perhaps even more confounding is when the invisibles occupy spaces that are owned and created by Capital, but consumed by the edge—like the unfinished 45-story skyscraper in Caracas that has been taken over by two thousand evangelical Christian squatters who haul water and wood by pulley up to high-rise flats without windows or balconies. 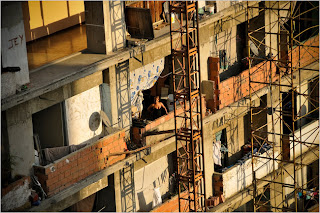 De Soto’s real complaint is that there is a world that lives outside Capital—a world of things that exist in the sense that we can observe them with our senses, but have no official existence, because their contours and coordinates have not been described in the legal ledger book of the State. Things without borders do not exist, and the borders that matter most are the virtual ones: the codes that define official reality by describing what can be sold, and at what price. 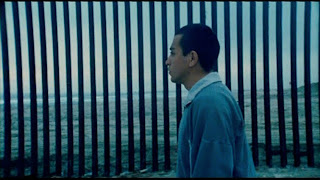 In his 2010 novel Zero History, William Gibson tells the story of a *product* that evades Capital, by breaking these same rules. The protagonists of the story search for designer denim clothing that is produced in underground ateliers, distributed through random viral networking. Because it has no brand, no name, and not even a price, it does not exist in the commodified realm of Capital. It cannot be found until you stop looking for it. And the real story of the book is that, by devising a stratagem to prevent the products of their self-expression from being co-opted by Capital, the designers chart a path to their own liberation from alienation.

Here in the edgelands, there are other paths of evasion. 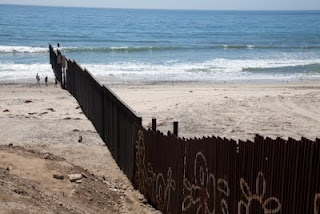 Posted by Christopher Brown at 12:27 PM

Email ThisBlogThis!Share to TwitterShare to FacebookShare to Pinterest
Labels: Tijuana, Walking through Walls