Over lunch the other day, as the latest manufactured crisis of our Coke v. Pepsi political culture reached its crescendo, a colleague and I got to talking about friends of ours who were in the business of developing new reality television programming. I wondered when the format might get used for more political material, citing the example of the BBC's recent exploration of author Terry Pratchett's advocacy for the elective suicide movement. For example, how about a reality show focused on what it is like to be poor in America? Follow our protagonist around as he desperately tries to get his power bill paid so he doesn't get disconnected…

Great idea, suggested my colleague, but serious political material would be tough to pull off when the key ingredient of a reality show is that it feature extreme examples of contemporary Narcissism. I was not persuaded that Narcissism and the political are mutually exclusive, but I did buy the idea that an earnest, 70s-style journalism-as-reform approach might have trouble permeating the genre.

How about a reality show that features an underground revolutionary cell seeking to overthrow the government? The Fox television series 24 did a wonderful alternate reality version of that, with various plot threads about well-groomed twentysomething American terror cells living in nice oceanfront apartments, looking every bit like the neighbors of the kids on Friends until they got the call from the Network and retrieved the arsenal from their closet. I suppose one could follow an existing American terror cell, like some Animal Liberation Front folks or a loco Idaho Panhandle separatist outfit, but it would be even better—more in the spirit of reality television—if the revolutionary movement were actually created by the producers to make "reality" fit the pitch. It would be cast with cosmetically enhanced all-American Narcissi who espouse no ideology other than the idea of how much the status quo sucks, and how cool it is to be a revolutionary, like Robert DeNiro's plumber in Terry Gilliam's Brazil. They'd be like the Teen Titan versions of the Tea Party, hot left-wing analogues of Palin and Bachmann and Edwards and Barry O, American Ches with Connecticut-made AK-47s, exceptional dentistry, and social media as their Granma, living among us until they get the alert from their radical smart mob. After all, isn't that what CNN has become in 2011? A reality-based narrative in which we all vicariously experience the revolutions we wish we could have.

Of course, the perfect Narcissists to star in the next generation reality show are the ones who created their own illusory documentary narrative long before Survivor and The Bachelor: the American politicians who love nothing more than to engage in on-camera histrionics designed to manipulate the emotions of the general public around a largely illusory conflict between two political parties who represent a fiction of meaningful ideological difference. The drama of the debt ceiling debate really brought that home this week—the gravity of the revelation that the debate was occurring because the economy has *stopped growing*, and the sense that the national political dialogue was becoming more like American Idol than Meet the Press.

Is it possible that the way to make American politics more effective in navigating our way through the chaotic disruption of the early 21st century is to make it operate *more* like reality TV? Watching the blowhards of the 112th Congress play national leaders on the ever-scrolling news feed, products of what J.G. Ballard observed as "politics conducted as a branch of advertising," I feel like it is fair to question whether the basic operation of our Constitutional structure has started to jump the shark.

Why can't we vote like it's 1994? Perhaps I'm the only one who remembers all the utopian excitement at the birth of the Web about the Network's potential as an instrument to realize a more authentically participatory democracy that uses the Network as a means to connect government more directly to the immediate will of the People. The Ford Foundation once had a whole group dedicated to funding experiments in that direction. All of that thinking seems to have been discarded with the hanging chads of November 2000, and the ensuing conspiratorial Luddite freakouts about the idea of software-based election fraud. But you have to wonder, in the style of a Newt Gingrich alt history counterfactual: if the Founders had the Internet, do you think they might have empowered a more distributed, popular referendum-based polity? If that scares you in the way California Constitutional referenda scare us all, how much worse could it be than being governed by our current philosopher kings: Harry Reid, Mitch McConnell, John Boehner and Nancy Pelosi? I will check back with you after the carnival sideshow that the 2012 Republican primaries promise to be. 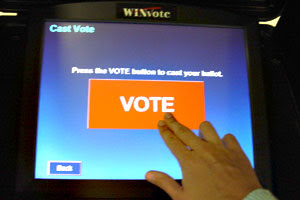 The 20th century revelation that probably had the most lasting cultural impact was Freud's—that people are governed by primitive animal natures and appetitive drives that are often more powerful than reason. Freud's insights were cynically employed on the this side of the Atlantic through his nephew Edward Bernays, the father of modern public relations, who overthrew the 19th century convention of fact-based advertising in favor of subtextual appeals to the baser natures. Consider his invention of the focus group, in which psychoanalytic group therapy is applied to the experience of a product, which led to a stunt designed to reposition cigarettes as totems of female sexual empowerment (see the BBC/Adam Curtis documentary, The Century of the Self). Reality television is all about putting the forces on display as vividly as possible, in the context of a superimposed narrative.

Doesn't the public debate about something like the debt ceiling want to be conducted like an American Idol contest, in which the myriad different possible approaches to a pressing political issue are filtered through public votes in a Network-based communal medium—politics practiced as the ultimate Facebook wall, and the ultimate decision rendered by the big vote of the millions of viewer/voters? Fox and MSNBC are already becoming the real architects of our politics. I speculate that media will evolve in the age of Network Culture to more directly marry the will of the People to the actions of our political leaders, in a form that will be more like Simon Cowell's Citizen Kane than any of us can imagine. Just ask Ed Miliband, who is trying so hard not to be a contestant. Julian Assange is a better model for the 21st century Lincoln Steffens than Bob Woodward.

The idea seems objectively horrific, because we are so well conditioned to think any sort of rule by the masses is an opportunity for their Freudian manipulation by psychotic, juvenile Narcissists acting out their issues with armies and secret police. But I think we underestimate the power of the Network to also provide the tools that police that. The Network abhors monolithic movements and media, instead providing the deepest possible markets for every idea or thing. And the Network enables the People to conduct surveillance on power, as we have seen in 2011 with regime change enabled by Wikileaks and Arabic dating sites. The 20th Century was the Century of the Self, and we know what that looked like. The Century of the Network is already manifesting new mediated iterations of community that transcend geography and even language. Can't that lead to a better politics? Surely the answer is yes, though not without plenty of crises and failures along the way.

Posted by Christopher Brown at 9:06 AM

Nice. We'll see soon enough, I believe. Strong local representation and a global mechanism for global issues may suit. Anything is possible but that is probable soon.