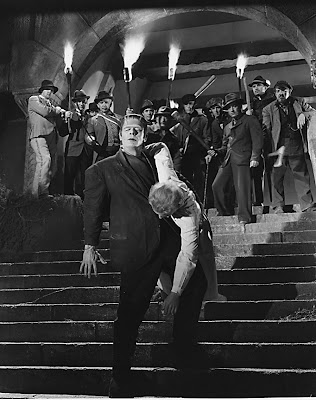 One of the cool things about my day job is that sometimes it intersects with my genre leanings in a big way. Take Frankenstein's Moon as a case in point. This is how I spent much of last week, distilling a full-blown Sky & Telescope article down to a media-release-sized writeup, balancing readability with accuracy. Not always an easy task, especially when there's a lot of research and technical nuance involved. Practice helps, though. In the past, we've worked on similar projects connecting Edvard Munch's painting The Scream with Krakatoa, settled a date conflict regarding Caesar's invasion of Britain, offered a convincing new date for the ancient battle of Marathon and solved Walt Whitman's meteor mystery, among many others. Fun stuff, that!

The current Frankenstein piece seems to be capturing popular attention as well. Already it has resulted in a nice articles in The Guardian, which as been reprinted in quite a few British newspapers. Another article written by Jim Forsythe at WOAI in San Antonio has been picked up by Reuters and shown up all over the world, including MSNBC. So yeah, we've got lots of Frankenstein to enjoy here at the end of September.

One cool bit of conflation didn't make it into the media release, but is touched upon in the full article. Allow me to slip into Jess Nevins mode for a moment (although Jess would likely scoff that this is common knowledge) to explain. During the original "ghost story" challenge mentioned below, Mary Shelley is the only participant to actually finish a written piece begun at that time. Lord Byron began one, but soon lost interest and abandoned it. John Polidori, however, took up that fragment some time later and was inspired to write The Vampyre, published in 1819. The story was an immediate success, in part, no doubt, because the publisher credited it as written by Lord Byron (Polidori and Byron fought for some years to get the attribution corrected in subsequent printings). The Vampyre was the first fiction to cast the legendary bloodsuckers as an aristocratic menace in the narrative, and spawned a popular trend of 19th century vampire fiction which culminated with Bram Stoker's enduring Dracula in 1897. Which means the two most famous horror icons of 20th century pop culture--Dracula and Frankenstein's monster--can both trace their lineage back to that 1816 gathering at Villa Diodoti overlooking Lake Geneva.

Victor Frankenstein’s infamous monster led a brief, tragic existence, blazing a trail of death and destruction that prompted mobs of angry villagers to take up torches and pitchforks against him on the silver screen. Never once during his rampage, however, did the monster question the honesty of his ultimate creator, author Mary Wollstonecraft Shelley.

That bit of horror was left to the scholars.

Now, a team of astronomers from Texas State University-San Marcos has applied its unique brand of celestial sleuthing to a long-simmering controversy surrounding the events that inspired Shelley to write her legendary novel Frankenstein. Their results shed new light on the question of whether or not Shelley’s account of the episode is merely a romantic fiction. 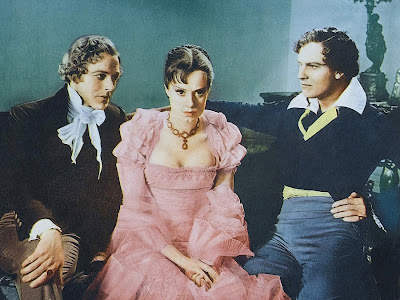 “Shelley gave a very detailed account of that summer in the introduction to an early edition of Frankenstein, but was she telling the truth?” Olson said. “Was she honest when she told her story of that summer and how she came up with the idea, and the sequence of events?”

A Dark and Stormy Night

The story begins, literally, in June 1816 at Villa Diodati overlooking Switzerland’s Lake Geneva. Here, on a dark and stormy night, Shelley—merely 18 at the time—attended a gathering with her future husband, Percy Bysshe Shelley, her stepsister Claire Clairmont, Lord Byron and John Polidori. To pass the time, the group read a volume of ghost stories aloud, at which point Byron posed a challenge in which each member of the group would attempt to write such a tale. 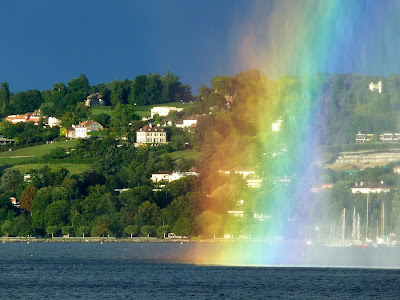 Villa Diodati sits on a steep slope overlooking Lake Geneva. Relatively clear views prevail to the west, but the view of the eastern sky is partially blocked by the hill. A rainbow greeted the Texas State researchers upon their arrival at Lake Geneva. [Photo by Russell Doescher]
“The chronology that’s in most books says Byron suggested they come up with ghost stories on June 16, and by June 17 she’s writing a scary story,” Olson said. “But Shelley has a very definite memory of several days passing where she couldn’t come up with an idea. If this chronology is correct, then she embellished and maybe fabricated her account of how it all happened.

“There’s another, different version of the chronology in which Byron makes his suggestion on June 16, and Shelley didn’t come up with her idea until June 22, which gives a gap of five or six days for conceiving a story,” he said. “But our calculations show that can’t be right, because there wouldn’t be any moonlight on the night that she says the moon was shining.”

Moonlight is the key. In Shelley’s account, she was unable to come up with a suitable idea until another late-night conversation--a philosophical discussion of the nature of life--that continued past the witching hour (midnight). When she finally went to bed, she experienced a terrifying waking dream in which a man attempted to bring life to a cadaverous figure via the engines of science. Shelley awoke from the horrific vision to find moonlight streaming in through her window, and by the next day was hard at work on her story.

Although the original gathering and ghost story challenge issued by Byron is well-documented, academic scholars and researchers have questioned the accuracy of Mary Shelley’s version of events to the extent of labeling them outright fabrications. The traditionally accepted date for the ghost story challenge is June 16, based on an entry from Polidori’s diary, which indicates the entire party had gathered at Villa Diodati that night. In Polidori’s entry for June 17, however, he reports “The ghost-stories are begun by all but me.” 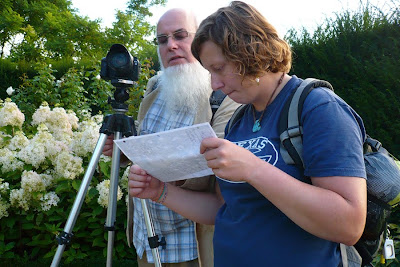 Russell Doescher and Ava Pope take measurements in the garden of Villa Diodati. [Photo by Marilynn Olson]
Critics have used those diary entries to argue Shelley didn’t agonize over her story for days before beginning it, but rather started within a span of hours. Others have suggested Shelley fabricated a romanticized version for the preface of the 1831 edition of Frankenstein solely to sell more books. Key, however, is the fact that none of Polidori’s entries make reference to Byron’s ghost story proposal.

“There is no explicit mention of a date for the ghost story suggestion in any of the primary sources–the letters, the documents, the diaries, things like that,” Olson said. “Nobody knows that date, despite the assumption that it happened on the 16th.”

Surviving letters and journals establish that Byron and Polidori arrived at Villa Diodati on June 10, narrowing the possible dates for the evening of Byron’s ghost story proposition to a June 10-16 window. To further refine the dates, Shelley’s reference of moonlight on the night of her inspirational dream provided an astronomical clue for the Texas State researchers. To determine which nights in June 1816 bright moonlight could’ve shone through Shelley’s window after midnight, the team of Texas State researchers traveled in Aug. 2010 to Switzerland, where Villa Diodati still stands above Lake Geneva. 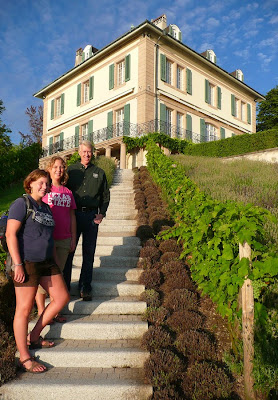 The research team made extensive topographic measurements of the terrain and Villa Diodati, then combed through weather records from June of 1816. The Texas State researchers then calculated that a bright, gibbous moon would have cleared the hillside to shine into Shelley’s bedroom window just before 2 a.m. on June 16. This calculated time is in agreement with Shelley’s witching hour reference. Furthermore, a Polidori diary entry backs up Shelley’s claim of a late-night philosophical “conversation about principles” of life taking place June 15.

Had there been no moonlight visible that night, the astronomical analysis would indicate fabrication on her part. Instead, evidence supports Byron’s ghost story suggestion taking place June 10-13 and Shelley’s waking dream occurring between 2 a.m. and 3 a.m. on June 16, 1816.

“Mary Shelley wrote about moonlight shining through her window, and for 15 years I wondered if we could recreate that night,” Olson said. “We did recreate it. We see no reason to doubt her account, based on what we see in the primary sources and using the astronomical clue.”

Posted by Jayme Lynn Blaschke at 9:40 AM

I had never heard of forensic astronomy until today. This is something I want to share with my kid, to show her how science and art can intersect to enrich our understanding & enjoyment of both.