If The New York Times had the comics section it needs (and really could do something cool with, mixing new indie strips, Wednesday Comics, and great vintage stuff), this downer of an article about how politics prevents us from even trying to really understand what's going on with our overtaxed climate would be counterweighted by Mark Trail's placid meditation on mistletoe and holly. 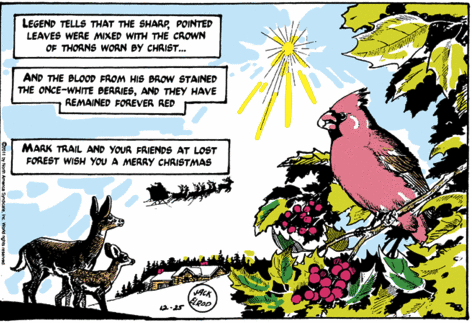 In the future, when network culture makes me my own newspaper every day (as it kind of already does), the Mark Trail lightness that follows the climate change depression will be annotated with a deeper reading. Perhaps with the unabridged edition of The Golden Bough, James George Frazer's thirteen volume compilation of the deep magical practices of human cultures that leads to a revelatory analysis of why it was mistletoe—the fruiting plant of northern woods that does not go dormant in winter—that killed Balder. "[M]istletoe acts as a master-key as well as a lightning-conductor; for it is said to open all locks." From Chapter 65, "Balder and the Mistletoe":

Now, considering the primitive character and remarkable similarity of the fire-festivals observed by all the branches of the Aryan race in Europe, we may infer that these festivals form part of the common stock of religious observances which the various peoples carried with them in their wanderings from their old home. But, if I am right, an essential feature of those primitive fire-festivals was the burning of a man who represented the tree-spirit. In view, then, of the place occupied by the oak in the religion of the Aryans, the presumption is that the tree so represented at the fire-festivals must originally have been the oak. So far as the Celts and Lithuanians are concerned, this conclusion will perhaps hardly be contested. But both for them and for the Germans it is confirmed by a remarkable piece of religious conservatism. The most primitive method known to man of producing fire is by rubbing two pieces of wood against each other till they ignite; and we have seen that this method is still used in Europe for kindling sacred fires such as the need-fire, and that most probably it was formerly resorted to at all the fire-festivals under discussion. Now it is sometimes required that the need-fire, or other sacred fire, should be made by the friction of a particular kind of wood; and when the kind of wood is prescribed, whether among Celts, Germans, or Slavs, that wood appears to be generally the oak. But if the sacred fire was regularly kindled by the friction of oak-wood, we may infer that originally the fire was also fed with the same material. In point of fact, it appears that the perpetual fire of Vesta at Rome was fed with oak-wood, and that oak-wood was the fuel consumed in the perpetual fire which burned under the sacred oak at the great Lithuanian sanctuary of Romove. Further, that oak-wood was formerly the fuel burned in the midsummer fires may perhaps be inferred from the custom, said to be still observed by peasants in many mountain districts of Germany, of making up the cottage fire on Midsummer Day with a heavy block of oak-wood. The block is so arranged that it smoulders slowly and is not finally reduced to charcoal till the expiry of a year. Then upon next Midsummer Day the charred embers of the old log are removed to make room for the new one, and are mixed with the seed-corn or scattered about the garden. This is believed to guard the food cooked on the hearth from witchcraft, to preserve the luck of the house, to promote the growth of the crops, and to keep them from blight and vermin. Thus the custom is almost exactly parallel to that of the Yule-log, which in parts of Germany, France, England, Serbia, and other Slavonic lands was commonly of oak-wood. The general conclusion is, that at those periodic or occasional ceremonies the ancient Aryans both kindled and fed the fire with the sacred oak-wood.

But if at these solemn rites the fire was regularly made of oakwood, it follows that any man who was burned in it as a personification of the tree-spirit could have represented no tree but the oak. The sacred oak was thus burned in duplicate; the wood of the tree was consumed in the fire, and along with it was consumed a living man as a personification of the oak-spirit. The conclusion thus drawn for the European Aryans in general is confirmed in its special application to the Scandinavians by the relation in which amongst them the mistletoe appears to have stood to the burning of the victim in the midsummer fire. We have seen that among Scandinavians it has been customary to gather the mistletoe at midsummer. But so far as appears on the face of this custom, there is nothing to connect it with the midsummer fires in which human victims or effigies of them were burned. Even if the fire, as seems probable, was originally always made with oak-wood, why should it have been necessary to pull the mistletoe? The last link between the midsummer customs of gathering the mistletoe and lighting the bonfires is supplied by Balder’s myth, which can hardly be disjoined from the customs in question. The myth suggests that a vital connexion may once have been believed to subsist between the mistletoe and the human representative of the oak who was burned in the fire. According to the myth, Balder could be killed by nothing in heaven or earth except the mistletoe; and so long as the mistletoe remained on the oak, he was not only immortal but invulnerable. Now, if we suppose that Balder was the oak, the origin of the myth becomes intelligible. The mistletoe was viewed as the seat of life of the oak, and so long as it was uninjured nothing could kill or even wound the oak. The conception of the mistletoe as the seat of life of the oak would naturally be suggested to primitive people by the observation that while the oak is deciduous, the mistletoe which grows on it is evergreen. In winter the sight of its fresh foliage among the bare branches must have been hailed by the worshippers of the tree as a sign that the divine life which had ceased to animate the branches yet survived in the mistletoe, as the heart of a sleeper still beats when his body is motionless. Hence when the god had to be killed—when the sacred tree had to be burnt—it was necessary to begin by breaking off the mistletoe. For so long as the mistletoe remained intact, the oak (so people might think) was invulnerable; all the blows of their knives and axes would glance harmless from its surface. But once tear from the oak its sacred heart—the mistletoe—and the tree nodded to its fall. And when in later times the spirit of the oak came to be represented by a living man, it was logically necessary to suppose that, like the tree he personated, he could neither be killed nor wounded so long as the mistletoe remained uninjured. The pulling of the mistletoe was thus at once the signal and the cause of his death.

When you admire the mistletoe, know that it is a symbol of the externalized soul. And when you think of mistletoe's connection to sacrifice, consider it as a symbol of our human ability to kill undying nature. And hope the rebirth doesn't have to wait to happen until after we're all gone. 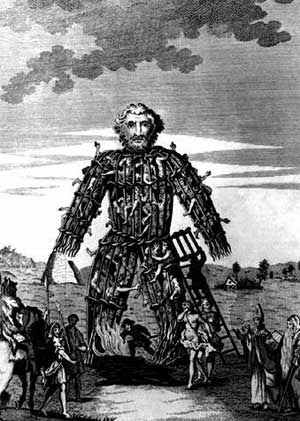 Full text of The Golden Bough here.
Posted by Christopher Brown at 8:02 AM